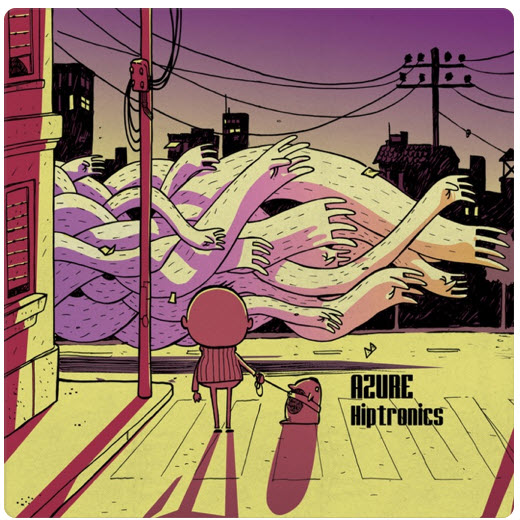 “There are no natural barriers. It’s all music. It’s either hip, or it ain’t.” ~ Lee Morgan, composer and jazz trumpet legend

Hiptronics is the title of the excitingly eclectic 2014 release from the jazz ensemble Azure. Approximating the above Lee Morgan quote, Azure ignore barriers and have made a musical hip statement with this, their second independent recording. The group, originating in The Netherlands, has evolved onto a decidedly more jazz-fusionistic path that suits them extremely well. Hiptronics consists of thirteen original compositions, all of which contribute to make a pleasurable cohesive whole.

“The group name Azure was chosen after a holiday in France, at the region ‘Côte d’Azur’, named for the lovely colour of the Mediterranean Sea there: a reflection of sky blue with a greenish hue. We loved the name for its associations with colourfulness and tranquility.” ~ Rogier Schneemann

“Hiptronics – that name we choose to reflect the new direction our music was taking, groove came into play, making our music ‘hip’, and we switched to electric instruments, hence the ‘tronics’. Because we feel our group sound is very unique to us – regardless of whether we were doing ‘ethereal chamber jazz’ or ‘eclectic’ music (we’ve read terms like these a few times in reviews) – we liked ‘hiptronics’ as a unique, still non-existing word.” ~ Rogier Schneemann

An enchanting song named “Ocean’s Edge” bookends the set. As an engaging instrumental, it sculpts contrasting moods and time signatures with powerful synth swoops and cymbal bashes to fashion a powerful opening statement, setting the stage nicely for what is to follow. The tune is led by the excellent Nord® keyboards and synthesizer stylings of the work’s author Federico Solazzo. Outstanding drummer/percussionist David Barker also plays an important role, while trumpeter Rik Mol provides a tasty slice of jazz-funk when he makes his appearance midway through the track.

The second song, entitled “Musquito Massacre Part II,” alternates between a languidly pretty piano-led melody and a more driving guitar, bass, and drums marching attack. Drummer Barker receives the writer’s credit on the tune that affords a prime example of Azure’s ensemble approach. Each band member contributes sturdily. In the vein of many of the tracks contained on Hiptronics, it is able to accomplish a great deal within the five to six minute timeframe, which is generally a concise constraint for the jazz-fusion genre.

Schneemann’s “Within Reach” is a fully beautiful instrumental jazz love ballad that he dedicates to Esmée in the liner notes. Delicate piano play dances alongside the double-bass of Luciano Poli in a seductive leisurely hand-in-hand walk in the park. The wonderful song provides a contrast to the often turbulent atmosphere Azure presents elsewhere on Hiptronics.

Written by Solazzo, “It’s Like Nothing Ever Changed” swings along with flamboyant keyboard flourishes and clean wah-wah pedal guitar effects. The song seems much shorter than its five minute running length, leaving the listener longing for it never to end.

Another Schneemann composition titled “Waving Tables” struts along with a funky rhythm from bass and drums underneath a synth melody astride occassional “scratching” qualities. The song’s groove reminds me of something from Steely Dan. That fact could be due to the inspiring guitar work by the tune’s author. This one is a very nice effort in all aspects; it’s one of the album’s highlights.

“Puddle Of Sand” is a leisurely paced, but incessantly moving masterpiece. The lusciously lullaby-smooth trumpet lead is followed by an expressive delicate guitar lead that helps convey the serenity of lying on a tropical island beach while enjoying the feeling of soft ocean breezes against your skin. This beautiful dialogue between Mol’s trumpet and Rogier’s guitar gives the tune an ethereal impression, enveloping the listener in a glorious warmth and grace.

“Miss Incognita” contains a melancholy melody fueled by muted trumpet courtesy of the song’s writer Rik Mol. The song features a European feel, similar to some of the tunes of Phillippe Saisse; seductive and exquisite.

By its title, “Dawinul” could be paying tribute to Joe Zawinul, the keyboardist and chief composer for the seminal jazz-fusion group Weather Report. One of the characteristics of that influential group’s music was their ability to tighten and release musical tension. That feeling is present in abundance on “Dawinul.”

“DB” shows off David Barker’s powerful drum rhythms set against ping-ponging synth accents. Barker is key throughout Hiptronics in establishing rhythmic landscapes which allow the other musicians foundations upon which to build upon to provide their solos.

My favorite song and my pick for jewel of the crown on Hiptronics is “Burn Everything.” It contains some of the most energetic moments on the album. Schneemann is a guitarist who uses his virtuosity sparingly, rarely putting on a technical display. On “Burn Everything” he lets fly with an awesomely breathtaking demonstration that is well conceived, thrilling and dazzling.

The cover artwork of Hiptronics fits in well with the intriguing traits of the music of Azure. The entire album is very well formulated, expertly sequenced, and skillfully executed. Edgy and inspiring, this brilliant music sounds purposely constructed as a symphony piece. Unique and creative, Azure has made a courageous and graceful objective statement of purpose with Hiptronics. It represents thoughtful cerebral music that deserves to be heard.