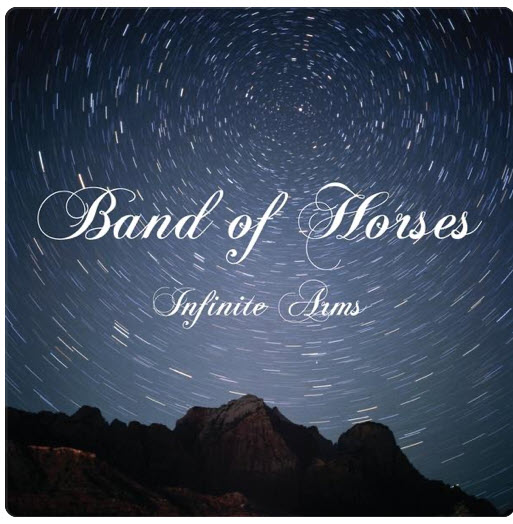 “We’re going to make this a monster”

~ Ben Bridwell in The Guardian

‘Infinite Arms’ is the group’s third album and has been praised and blamed as “their strongest album yet” and “the biggest disappointment of 2010”. Ben Bridwell, the group’s chief writer and lead vocalist has been quoted as saying “in many ways, this is the first Band of Horses record”.

After heavy rotation of this album in the past few weeks, I am strongly taken with the execution of their stated influences – Grand Funk Railroad, Chicago Transit Authority, and The Traveling Wilburys – as well as the unspoken but obvious (to these ears anyway) mentors – the guitar sounds of the Allman Brothers and Neil Young’s early albums, as well as the lush harmonies of The Beach Boys. The album cuts “Factory”, “Older”, “On My Way Back Home” and “North West Apartment” are the highlights, and “Laredo” is a great radio pick-me-up. Those five tunes alone would make for an outstanding EP.

Where Band of Horses falls seriously short is in the lyric writing. Many of the tunes on this album as about love, loss, and nostalgia, and frankly they are sung so sweetly by Bridwell that it’s tempting to overlook the banality of the words. However, there’s so little sense of irony, detachment, or use of metaphor here that it detracts from the ethereal musicality of the performances. A few examples of this are “Oh my love, is that you on the telephone?” and “I thought about you in the candy bar”. Bridwell almost manages to make this sound like lovely stuff, even though deep sincerity mated to a juvenile lyric is often one of pop music’s least attractive qualities.

The lyric considerations aside, this album is still a contender for one of the best of 2010. The tunes stick with you, and musically the album is a whole that exceeds the sum of its parts. This is a flawed but compelling work from the major talent of Ben Bridwell, and I look forward to further records from a guy who has obvious staying power. His own comment on regarding the album as a beginning is a welcome sign of new directions to come in the years ahead.

Being a fan of album cover art, I have to mention the wonderful interior photos accompanying this record – they are far superior to the uninspired starry mountain shot adorning the cover.