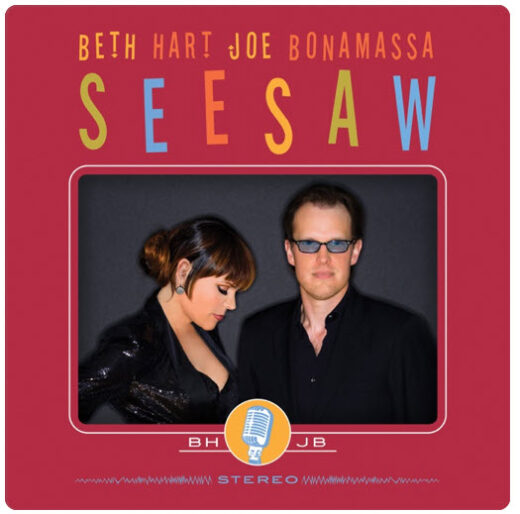 In 2013 Beth Hart and Joe Bonamassa released their second collaboration of classic cover songs entitled Seesaw on the Provogue label. Both of these talented performers are perhaps best known for their forays into the blues, but this release finds them stretching the boundaries of their comfort zone in an album of covers genuinely eclectic in scope. The pair first worked together when Beth provided a backing vocal for Joe on “No Love On The Street,” an excellent smoky simmering guitar slow-bluesy delight included on Bonamassa’s 2011 album Dust Bowl. Next came their album of classic soul and blues covers titled Don’t Explain following later that same year. It was met with mass public and critical approval. Along with other treats, it included a striking soulful burning remake of the Etta James classic “I’d Rather Go Blind.”

The prolific guitar slinger Bonamassa then concluded his very busy recording year in 2011 with the 2nd of three albums from his hard rock super-group side project Black Country Communion also hitting the store shelves. The past few years have found Bonamassa continuing on his busy schedule, positioning himself firmly in prominent notoriety. His continual touring, guest recording appearances, live electric and acoustic albums, and his own studio recordings have facilitated Joe’s rise to the top echelon of America’s leading and most beloved blues guitarists.

“It is the wallop of Joe Bonamassa’s emotional expression, fueled by the rocking energy he derives from that trans-Atlantic connection and driven by his devastating technical ability that elevates him about his peers and makes him a certifiable blues guitar hero and the face of his blues generation.” – from Guitar Edge

Seesaw follows pretty closely in the blueprint provided by Don’t Explain with Beth Hart handling the lion share of the vocal duties in spite of Joe’s prowess in that area. But, in that regard, she again proves her worth with another marvelous performance that displays her wide harmonic range and first-rate song interpretation skills. As on the first collaborative CD, Kevin Shirley who has been working with Joe Bonamassa for many years, handled the production. In addition, Shirley and Joe teamed to offer a list of song candidates for Beth to contemplate putting her vocal stamp on. Choosing the correct songs is a talent, and they teamed up to select eleven choice ones.

The supporting cast on Seesaw sees a return of a majority of the cast from Don’t Explain. South African Blondie Chaplin (rhythm guitar), Anton Fig (drums), Carmine Rojas (bass), Michael Rhodes (bass), and Arlan Schierbaum (keyboards) all revisit. They all are regulars on Joe Bonamassa recordings with each of them owning remarkable musical resumes. Another impressive Don’t Explain sideman to make an appearance is percussionist Lenny Castro who is arguably the most in-demand percussion artist alive, renowned for his ability to add colorful textures to whatever music he blesses with his Midas Touch.

The opening song on Seesaw is “Them There Eyes,” a jazz standard published in 1930, most famously performed by Billie Holiday, Louis Armstrong, and scores of other famous vocalists. The guitar sound is in a 50’s style reminiscent of Brian Setzer during his tenure in Stray Cats, and the song has a light jazzy big-band feel with an agreeable brass arrangement by Lee Thornburg. Beth Hart’s smart vocal treatment is sweetly cute and monumentally endearing.

“Close to My Fire” is of a more recent vintage, and Hart here gives a wonderfully sultry singing performance that falls midway between Macy Gray and Amy Winehouse. Although to my ears, Beth is superior to either of those famous female sirens. The sensual lyrics are executed masterfully with a coy and friskily playful slant that is exceedingly enticing. Joe’s guitar is frostily bluesy and restrained, providing a perfect compliment while bestowing the spotlight to Beth. When Bonamassa’s lead guitar solo is delivered, it is classily done with an elegant flair that is gratifying, and leaves you thirsting for more. The brass arrangement again adds a potent punch to wrap the song snugly into a nice package.

Beth pulls out her best raw and soulful vocal for Ike and Tina Turner’s “Nutbush City Limits.” Once again the horns strike with clout, as does the guitar duo of Bonamassa and Chaplin. Closely akin to the original from the 70’s, the song is a funky hard-driving number that Hart belts out with abandon.

“Billie Holiday and Ella Fitzgerald: I’m fascinated by them, but then when I heard Robert Plant and Chris Cornell, I couldn’t get over their power.” – Beth Hart

The undisputed centerpiece of the album is the slow-burn of Al Kooper’s “I Love You More Than You’ll Ever Know.” The song first appeared on Blood, Sweat & Tears’ debut LP Child Is Father to the Man. Kooper had left his previous band, the Blues Project, in a dispute over adding horns to the group’s arrangements. That dispute led him to form B,S,&T, along with Blues Project guitarist Steve Katz and some other memorable members. But sadly, Kooper only stayed around for the 1st album and missed the band’s later commercial glory. The Seesaw version adheres closer to the brilliant cover version by the late, great guitarist Gary Moore. Moore had very few peers when it came to the mastery of a Les Paul guitar, but Joe Bonamassa may possibly be amongst the select company that indeed is. Many could argue that this song would be a good nominee for a Bonamassa lead vocal, but Beth Hart is simply incredible on her incendiary heart-felt bluesy gut-wrenching rendition.

Joe and Beth travel the Americana road with “Can’t Let Go,” a song from Lucinda Williams’ breakthrough album “Car Wheels on a Gravel Road.” This melodic and well crafted song penned by Randy Weeks features snappy Anton Fig drum work and a roadhouse country-blues vocal by Beth. The lyrics make reference to “broken down like a train wreck,” and the slide guitars and chug-a-lug drums assist in giving an impression of a train moving briskly along the railroad tracks.

The entire band shines on the rhythm and blues shouter “Miss Lady,” led by the powerful drums of Anton Fig and some blistering guitar work from Bonamassa and Chaplin. The powerful drums and screaming psychedelic wah-effect guitars shouldn’t come as a surprise if you realize that the song was written by the great drummer Buddy Miles, and the electrifying song was produced by Jimi Hendrix for the Buddy Miles Express album Electric Church in 1969. Yet again, the brass arrangement adds flavorful zest to the mix.

Seesaw includes some very impressive horn arrangements all the way through by Lee Thornburg. Lee is a multi talented trumpet and trombone player with extraordinary tour credentials and credits that include playing with the best of the best throughout his career. A five year stint in the Jay Leno Tonight Show Band, and most currently a member of the fabulous jazz group East Street Soul, both stand out to me as bright spots on his extensive musical background.

The masterfully written Melody Gardot’s “If I Tell You I Love You” contains a different sound from all the other songs on Seesaw. It has the atmosphere of a French cabaret with a sensual smoky chanteuse vocal with finger pops and echoed guitar tones. Hart shows marvelous nuance in her tonality, especially when singing the sultrily teasing “oh je t’aime, oh oui je t’aime, darling, I am lying.” If you can picture the pink panther meets James Bond with a Bond girl in tow within view of the Eiffel Tower, you’ll get the exotic air radiated by this one. Beth Hart is simply divine on this one.

1975’s Al Green soulful song “Rhymes” from his Al Green Is Love album has been chosen as the first single, and first video to be pulled from the release. The Hart/Bonamassa rendition is faithful to the original capturing all the Memphis soul charm that pushed Green’s effort to the number one spot on the R&B/Soul charts. It takes a confident “chutzpa” or supreme self-confidence to cover an Al Green song, and Beth does it well. Joe’s guitar licks echo the original co-author’s (Mabon “Teenie” Hodges) perfectly, and The Memphis Horn sound is duplicated superbly by Lee Thornburg making this song a pure joy.

“A Sunday Kind of Love” is a popular standard from the late forties that is given a bluesy treatment far different from the Kenny Rankin cover version that was my first introduction to the song. Beth’s vocal does honor to Etta James, and Joe’s guitar is especially sweet.

Beth channels the Queen of Soul convincingly when she raises a ruckus with a spirited gospel/rock rendition of “Seesaw.” This song written by Steve Cropper and Don Convey earned Aretha Franklin a gold record in 1969 and it also gives Joe Bonamassa an opportunity to blister the frets. Yet another churning Thornburg brass arrangement adds to the excitement level, which is pretty much off the charts.

In a sharp contrast to the previous track, the album winds down with “Strange Fruit,” the eerily haunting song that protests the inhumanity of racism. In 1999 Time Magazine named “Strange Fruit” the “song of the century.” Most famously sang by Billie Holiday, it has been covered by many others including Nina Simone and Dinah Washington. All of these legendary singers have been acknowledged as influences by Beth. Introduced to their music by her mother, Hart sings with an emotional poignant jazzy melancholy that is wholly appropriate to the lyrical content.

Ace producer Kevin Shirley keeps the proceedings taut throughout, with the recording accomplished live in the studio to bring that exhilarating feeling of being front row center to the proceedings. Beth Hart vocals are consistently front row and center in the mix. All the musicians are consummate, with Joe Bonamassa showing off his extremely refined taste to great advantage always adding just what is needed. They decided to title the album Seesaw in part because the sequencing of the songs does tend to sway between up-tempo and slower melodies, but you won’t hear any complaints from me in that regard.

Seesaw offers an exquisite musical experience worthy of accolades. It demonstrates that given the proper support Beth Hart can sparkle like a precious jewel. It substantiates that standards are indeed “timeless,” and can be performed with reverence and still be open to reinterpretation in the hands of highly skilled musicians. Beth Hart, Joe Bonamassa, Kevin Shirley and all those involved in this project respect their musical heritage. They exhibit how throughout history the American tradition of exposing the songs to a new generation keeps the Blues alive and thriving. Quality music is still being made by those who obviously love what they do, and Seesaw is a perfect example of that fact.