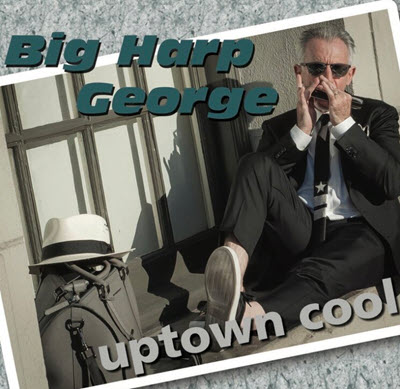 Big Harp George rounds up some of the talented West Coast friends from his previous two albums for his new and ultra-cool release Uptown Cool on the Blue Mountain Records label. Big Harp George made his front man musical debut in 2014 with Chromaticism, followed in 2016 by Wash My Horse In Champagne. Big Harp George (Bisharat) presents twelve brand spanking new compositions that showcase his clever lyrical wit and age-earned wisdom, his enjoyable vocals, and his mastery of the chromatic harmonica; a larger and more complicated harmonica than the much more common diatonic models.

Continuing the pattern established on his previous two releases the guitar cunning is equally split between Kid Andersen and Little Charlie Baty. Both of these modern six string wizards exploit their musicianship with each of them strutting their stuff on six separate songs. Andersen plays bass guitar on the tunes where Baty plays guitar. The bass guitar duties are handled on the six songs where Andersen plays guitar. Keyboardist Chris Burns is also back in the fold making his valuable presence felt on every track, as well as receiving production credit. Drummer Alex Pettersen (like Kid Andersen a native of Norway and a member of Rick Estin and the Nightcats) is also on all the songs. Uptown Cool was recorded at Kid Andersen’s Greaseland Studios in San Jose, CA, and engineered by Andersen.

“Greaseland is becoming really popular, probably bordering on legendary in our little sub genre. Kid Andersen is the best engineer I’ve ever worked with.” ~ Rick Estin

George hits the ground runningwith “Down to the Rite Aid,” a song with a very catchy swingin’ melody and a potent blend of horns and harmonica. The lyrics concern the reliance on health medications and support aids (canes, joint braces, etc.) that unfortunately become necessities for the majority of aging folks. The song has a joyous feel, even though the lyrics involve some not so joyful topics such as the darkly serious possible side effects on almost all prescription drugs. There is a call and response treatment between George’s harp and Baty’s guitar in collaboration with a steady rollin’ boogie-woogie piano that all come together very nicely.

The perils of internet dating are lampooned on the lyrics for “Internet Honey.” A growling yakity-yak tenor saxophone of Michael Peloquin adds a real nice touch and is precisely paired with the slide trombone of Mike Rinta. The rhythm is propelled along with an old-school skating rink organ courtesy of Chris Burns. Kid Andersen contributes the occasional piercing lead guitar riff, and George’s harp and vocals neatly fill in any empty spaces. The rhythm section of Pettersen on drums and Joe Kyle on bass guitar shoulder their fair share of the load.

“Alternative Facts” is a song of particular relevance in these current times of fake news fueled by the en masse sharing of misinformation on social media. The tongue-in-cheek lyrics show some examples of how far-fetched some of the fabrications posing as truths can reach. George uses a semi-spoken vocal to get his message across. The horn arrangement by Peloquin, who also did the arrangement on “Internet Honey,” suits the song without blemish. Kid Andersen shows his fretboard agility and the background vocalist sings the refrain “fake news” and is answered each time by Big Harp correcting with “alternative facts.” BHG’s harmonica play is simply sublime.

“Uptown Cool is the fullest realization of my musical vision to date. Each song bears the mark of great musicians who contributed their creativity unstintingly to this project.” ~ Big Harp George

A Latin-tinged tune called “I Wanna Know” features some Spanish style guitar by Baty and a good back-ground vocal by Loralee Christensen. Big Harp sings and plays his instrument like the pro he is. D’Mare implements some ever so pertinent percussion in concert with Pettersen’s drum work while Andersen supplies distinctive syncopated rhythmic character on bass.

“Nobody’s Listening” is a gentle jog into laid back late night jazz-blues territory. Big Harp’s harmonica playing is most impressing; both for his control and the limpid tone his instrument achieves. This tone reminds me of Texan Mickey Raphael when he at times strays further into jazzy terrain. Baty’s guitar and Burn’s piano effectively complement Big Harp’s warm vocal and add to the ambiance.

“Paul DeLay was incredibly creative and did things on chromatic no blues player had done before. His playing inspired me to focus on the chromatic harmonica.” ~ Big Harp George

In addition to the late Paul DeLay, Big Harp George was, early in life, captivated by Paul Butterfield and began playing diatonic harmonica at age twelve. He now lists his four largest influences on harmonica to be Paul Delay, William Clarke, George “Harmonica” Smith and Big Walter Horton. Little George “Harmonica” Smith was the player who first introduced the concept of playing octaves on the chromatic harmonica.  George “Harmonica” Smith settled in L.A. in 1955 and made an indelible impact as he helped mold the styles of numerous younger West Coast players such as William Clarke, Kim Wilson, James Harman, and most significantly Rod Piazza. Smith and Piazza played in the band Bacon Fat for several years displaying excellent chromatic harmonica expertise.

“William Clarke was a very jazzy player; at least on the chromatic. I loved his jazzy approach, he was a swinging player, and so, I extended that jazzy tradition in my music as well.” ~ Big Harp George

Two instrumentals grace the contents of Uptown Cool. The first one is entitled “In the First Place” and is a jazzy boogie with the harmonica chugging along with the intensity of a choo-choo train rumbling down the tracks. The second instrumental is the title track “Uptown Cool.” This one contains some chilled guitar by Baty who then supplies a semi-reggae feel on his mid-song solo that showcases Baty’s fretboard fluency to full effect. That solo is shortly followed by a harmonica solo by Big Harp that firmly takes center stage. The third solo of the song is provided by Chris Burns on a Hammond B-3 organ. Both of these instrumentals are good variations from the remainder of the album’s selections.

The classic slow Chicago Blues comes via the song “Cold Snap by the Bay’ and is probably my favorite song on the album. BHG is in fine bluesy vocal form and his harmonica solo is as blue as the sky in Montana while the sad atmosphere creeps into the song like a stalking lioness. The subject matter of the lyrics concerns three men freezing to death down in San Jose. BHG exclaims “play one Chris” just before Chris Burns take a majestic tinkling piano solo.

A small taste of Spanish lyrics adds to the Latin feel of “Just Calm Yourself.”  Loralee Christensen glows in her role as vocal foil to Big Harp George on this one, and Kid Andersen is nimble as a goat on lead guitar.

For an additional display of variety, Big Harp George and his crew take a cultural trip down New Orleans way with “Lord Make Me Chaste.”  The horn section of Michael Peloquin on saxophones and Mike Rinta on trombone and tuba fuel the engine as a smooth BHG vocal is assisted by a scat vocal by Derick Hughes.

Big Harp George plays his chromatic harmonica with a dynamite combination of rhythm, pitch, intonation and style. He remains a mighty fine songwriter displaying a keen intellect. The guitar array of Kid Andersen and Little Charlie Baty always are a source of confident sophistication and provide appropriate accompaniment throughout. George’s website header proclaims him to be a practitioner of 21st Century Artisanal Blues.

On Uptown Cool Big Harp George and band presents a signature stew of infectious songs, ironic lyrics, and impeccably played instruments making this one a tour de force for aficionados of chromatic harmonica. 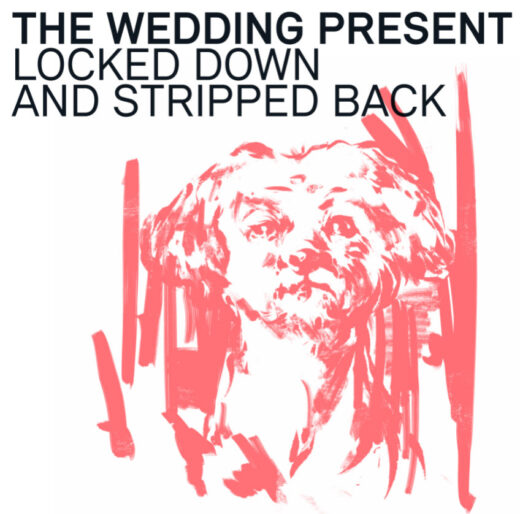