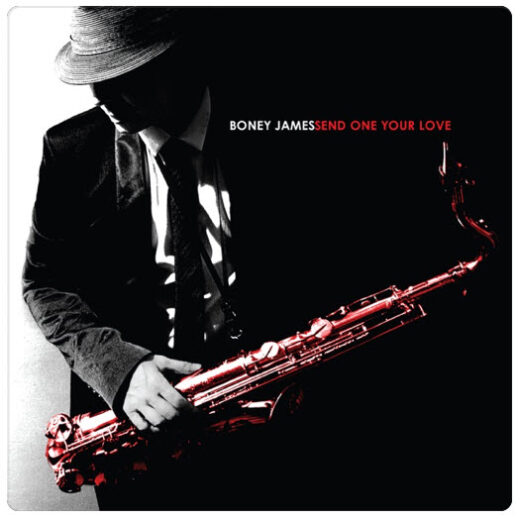 Smooth jazz has always been partially fueled by recording artists covering classic, timeless songs while putting their own style, heart and soul into the arrangements. Boney James has long been one of the shining lights of the contemporary/urban/smooth jazz scene. In the past he has added his special spice to respectfully cover songs that have become staples in his live performance set list. “Sweet Thing” (Rufus & Chaka Khan) and “Grazin’ In The Grass” (Hugh Masekela) are two prime examples that come immediately to mind. On his 2009 Concord Records release, Send One Your Love, Boney James paid homage to some of his favorite sensuous singers and composers, while adding five new similarly romantic songs of his own to this sumptuous collection.

As with his previous CDs since 2004’s “Pure,” James has again masterfully handled the production duties himself. Starting off the disc with “Wanna Show U Somethin,” Boney sets a seductive mood that will prevail throughout. He could have easily titled this CD “Seduction,” if he hadn’t used that title for a previous release. On this opening and original composition he plays a delicate melody in a call and response method with his alluring sax being sweetly answered by the sultry siren whispering vocals of Sue Ann Carwell.

The title track is a pleasing remake of Stevie Wonder’s 1979 Billboard Adult Contemporary chart topping “Send One Your Love.” Perhaps, some older music lovers will remember that Stevie put an instrumental version of the soothingly calm and inspiring song on the b-side of his single. Stevie Wonder’s catalog is an obvious choice for this project, with Boney James citing Stevie Wonder as one of his early influences. Due to the genius of Wonder’s songwriting, he’s been covered countless times by notable smooth jazz artists in the past. A couple of my all-time favorite Wonder covers are “You Are The Sunshine Of My Life” presented way back on Grover Washington Jr.’s seminal recording “Soul Box,” and Lee Ritenour’s rendition of “Isn’t She Lovely” on his “Captain Fingers” release. Boney very emphatically proves his powers of emitting passion using his supple skills on the soprano sax to send out his love.

Boney’s selection for the first single was the ever-beautiful “Stop, Look, Listen (To Your Heart).” This classic was a giant hit for the Philadelphia soul group, The Stylistics. Marvin Gaye & Diana Ross, and then more recently, Michael McDonald & Toni Braxton also had successful duets singing the song. Boney’s version is warm and cozy, and features his tenderly pleading tenor saxophone accompanied by some beautiful keyboards by Tim Carmon.

James Taylor’s lovely song “Don’t Let Me Be Lonely Tonight” featured the late, great Michael Brecker on tenor sax. Taylor then returned the favor and provided vocals and a slower, jazzier arrangement for Brecker’s album of ballads, “The Nearness of You, The Ballad Book.” JT earned the 1971 Grammy for Best Pop Vocal Perfomance on that second treatment, which is closer to the arrangement that Boney favors here. Jazz sax icon David Sanborn also covered this one on his Closer CD, and the song also appeared as one of the highlights of Eric Clapton’s Reptile album. The Clapton take was amazingly heart-felt, and brings tears to my eyes every time I hear it. Quinn, a relative newcomer to the music scene, here provides the coaxing vocals. Quinn’s style is similar to the Isley Brother’s soulful rendition, but with more restraint. For the record, Boney used to back the Isley Brothers in his formative years, so his inclusion of this song isn’t surprising. The song was the only non-instrumental track on the album and after its release as a single was nominated for the Grammy Award for Best Traditional R&B Performancein 2010.

An original titled “Hold On Tight” follows and continues the prevalent seduction mood with Boney’s sultry tenor sax playing, subdued wah-wah guitar tones of Agape, and gentle keyboards (Tim Carmon), all combining with a luxurious string accompaniment to make this a very special track. This tune shows off Boney’s expertise as composer and arranger, and the bass of veteran Alex Al is a perfect fit for the silky groove.

“The saxophone is actually a translation of the human voice, in my conception. All you can do is play melody. No matter how complicated it gets, it’s still a melody.” ~ Stan Getz

Boney James has always been known for his funk, and Barry White’s “I’m Gonna Love You Just A Little More Baby” has Boney playing soulfully and passionately on his alto saxophone. The Stan Getz quote before this paragraph particularly applies to this song. Boney literally sings the lyrics on his alto with the same romantic richness that made Barry White a titan in the quiet storm format.

The aptly entitled “City of Lights” sets a slightly melancholy mood with Milt Jackson influenced vibraphone provided by Stefon Harris and pensive guitar by Dean Parks. The strings once again increase the ambiance and help make this Boney James-Tim Carmon original a likely choice for inclusion in a movie score.

The melodic original “Butter” is slowly and smoothly spread, with a splendid fluidity and purity of the notes. It serves as a fine example of Boney’s now distinctive style; one which strongly favors a lush melodic approach with a healthy dose of R&B flavor. It was the second single released from Send One Your Love and one listen to the song will substantiate why Boney named the song what he did.

The R&B duo The Brothers Johnson hit gold with “I’ll Be Good To You,” on their debut album produced by Quincy Jones. It was a repeat hit fourteen years later on Q’s Grammy Award winning “Back on the Block,” sung by Ray Charles and Chaka Khan. It should have become a hit a third time; it is that special. Boney’s touring guitarist at the time of Send One Your Love, Rob Bacon, teams with the rhythm section to create a delightful funky groove.

On the bonus track, “Summer Dress,” Boney again utilized the alto saxophone, and added some smartly inserted harmonica phrasing courtesy of Gregoire Maret, to end the disc with yet another intimate ballad.

With Send One Your Love Boney James created a romantic recording that seamlessly flows from beginning to end, taking the listener along with him on an eternal journey of love. Send One Your Love debuted at the top spot in the Billboard Contemporary Jazz charts upon its release, a position that was justly deserved. This is an album full of wonderful songs that will appeal to longtime Boney James fans and every romantic. Dreamily seductive and captivating, Send One Your Love is guaranteed to get and keep you in the right mood.