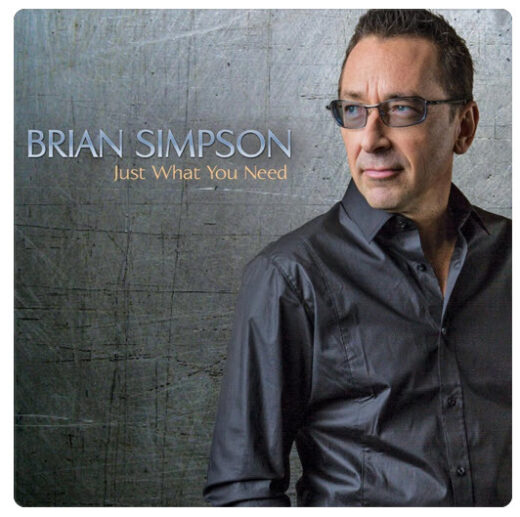 Brian Simpson, a master keyboardist, composer, producer, and performer in the Contemporary and Smooth Jazz world was back in a big way with his fifth solo recording entitled Just What You Need on the Shanachie label. Simpson has held the post as performing musical director for Dave Koz for nearly two decade and was an integral part of Koz’s Live at the Blue Note Tokyo release. He has also served as a musical director for Janet Jackson and in the same capacity numerous years on the Smooth Jazz Cruise. Those three situations all endow high visibility opportunities for Brian to be prominently conspicuous to a multitude of admirers.

Brian Simpson rightly owns a sterling reputation for releasing albums of only the highest quality that draw attention to his own melodic masterpieces amid special guest appearances by some of the genre’s elite guest musicians. Just What You Need is from that equivalent mold, but with a slight variance of the formula. As Brian relates, “What makes this CD different from my previous ones is that I collaborated with some new young composer/producers at the inception of the project. Nicholas Cole is the youngest of these composers (nineteen years old), and I was so happy with the songs we did together. I think I was able to make a CD that had my signature style yet also has the fresh spirit of these young jazz music producers.”

To substantiate this philosophy, three of the ten songs on the new release are outstanding Brian Simpson/Nicholas Cole co-written/co-produced works. Simpson furthermore connects with two other youthful much-in-demand producer/arranger/keyboardist/composers in the impressive duo of Michael Broening and Nate Harasim to jointly compose and produce two other marvellous tunes.

The first Simpson/Cole composition, “Wherever You Go,” magnificently leads off Just What You Need with Simpson providing chording melodies on piano, Cole on whirling keyboards and programming, and the multi-talented Jonathan Butler featured on lead guitar. Alex Al, the monster-bassist/supreme-sessionist also in attendance on Simpson’s last three releases (2010’s South Beach, 2007’s Above the Clouds, and 2005’s It’s All Good) brings his steady-groovin’ presence to this and nearly every other cut on Just What You Need. Versatile veteran sideman Darrell Crooks, also on the last two Simpson albums, nicely accompanies Butler with harmonic rhythm guitar.

Sax prodigy Elan Trotman lends his aura to the title track “Just What You Need,” which is, for good reason, already getting massive radio airplay. A winning melody with a substantial hook composed by Michael Broening and Simpson promotes an ample feel-good vibe. Simpson and Trotman engage in delightful bouncy interplay on this song that seems to end much too quickly.

The richly resourceful Ron King on muted trumpet adds great smoky flavour to Simpson’s artistic piano driven “Emerald City.” Alex Al’s bass is poppin’ and Brian Kilgore lays down a percussion groove that is guaranteed to make you want to move. Repeated plays of this one have made it a personal favourite, which speaks volumes when every single song displays such high class excellence.

“Soul Embrace” is a Latin-inspired urban jazz number guided by the masterful piano of Simpson aided by the haunting guitar of Yarone Levy. Levy was a stand-out on “Just Love,” on South Beach, and his arty appearance here is a most welcome addition.

Centered by a stout thumping Alex Al bass-line and a dazzling duet of piano and sax, “A Love Like This” fulfils the romantic promise of its title. The highly emotive Elan Trotman surfaces again on tenor saxophone to the accompaniment of some of the most vividly constructed piano stylings Simpson can offer. Brian Kilgore, another of Simpson’s frequent recording companions, works his magic on percussion.

Simpson’s dreamily breezy piano is the lead instrument on Antonio Carlos Jobim’s sublimely sensual Brazilian bossa nova “The Girl from Ipanema;” one of only two covers on Just What You Need. The iconic Dave Koz guests on tenor saxophone, and as is customary, his interpretation of an immortal piece of passionate music is breathtakingly gorgeous. The sixty year old Jobim classic, performed instrumentally with a more deliberate pace, is ministered to by all the musicians with a deserved reverence. This instantly familiar musical fragment arriving at the half-way point of the CD has merit. Especially when the song’s intimately romantic mood is conveyed with such elegant classiness.

The rhythm section consisting of Michael White on drums, Alex Al on bass guitar, and Brian Kilgore on percussion establish a deep pocket soulful groove on “D’Groove.” Veteran sax great Gerald Albright and muted trumpeter Ron King alternate in taking conspicuous turns radiating in tandem with Simpson’s suavely sparking keys. The groove reminds me a bit of Boz Scagg’s “Lowdown” in that it’s nearly impossible to resist a bit of head bobbin’ along with the tune, but it is a shade darker hue.

Brian’s consummate song writing skill is fully displayed on the hazily beautiful “In the Rain.” Comparisons to Brian Culbertson are warranted on this one, as it is hypnotically inducing as it provides a grand vehicle for Simpson’s gently graceful tickling of the ivories and Marc Antoine’s attractive acoustic guitar to dance a slow bewitching harmonizing duet on this instrumental ballad.

“Castaway” clutches the brooding refined European feel that is present in the best arrangements of Philippe Saisse. Brian Simpson’s piano technique is forefront in this song written by the song-writing/multi-instrumentalist team of Oliver Wendell and Stanley Berger. That same gifted pair were responsible for penning three songs on Simpson’s last CD, further testimony to the calibre of friends and acquaintances that Brian brings to each recording session.

The lone vocal track on the CD is the closer, a remake of British pop singer Des’ree’s “You Gotta Be.” A soulfully supplied uplifting vocal by Jeff Robinson, interspersed with some jazz-scat accents, assists Simpson’s inspired piano as the duo share the spotlight. The optimistic lyrics are self-affirming while the arrangement satisfies by adding a broadened diversity.

Once again Brian Simpson has made his mark with a top-notch impassioned release full of infectious rhythmic themes and motivated artistic musicianship. Brian has plenty of excellent help on Just What You Need, but it remains his star that continually burns the brightest. The infusion of the new composer/producers adds freshness without compromising any of the sensitive creativity that Brian Simpson is celebrated for. All these factors contribute in making Just What You Need the eminently listenable experience that it is.