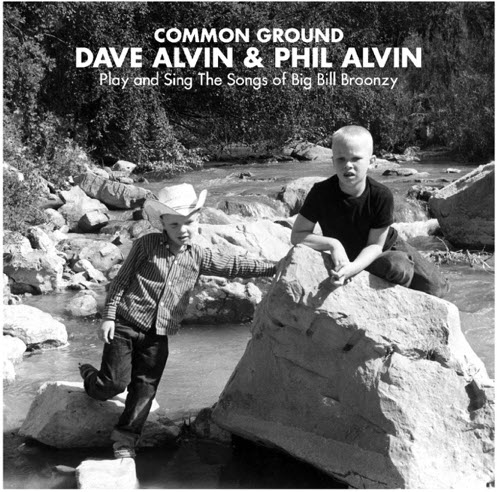 The Alvin Brothers bring forth one of the best Roots albums of this or any year.

In great news for their legion of faithful fans, Dave Alvin and his brother Phil Alvin have reunited in the recording studio to pay homage to one of their greatest heroes. The result is Dave Alvin & Phil Alvin Play and Sing The Songs of Big Bill Broonzy: Common Ground released on the Yep Roc Records label. It’s a record not to be missed. In paying this tribute to one of their biggest idols the Alvin brothers have shone a bright spotlight on their own immense talents.

The recording was completed in the old school method of bringing all the musicians together in the studio to play the songs together. This aided in allowing everyone to feed off the Alvin brothers depth of loving energy and devoted commitment to the Big Bill Broonzy’s catalog. They have selected a dozen of Big Bill’s songs that cover a massive variety of the hues of the Blues for this tribute, with each and every one of these songs proving that Broonzy’s songs are indeed timeless. Broonzy gave Muddy Waters a firm foothold in Chicago by allowing Muddy to be his opening act in the small blues clubs. Waters repaid the favor in 1961 by recording a dozen of Big Bill’s songs on Muddy Waters Sings Big Bill Broonzy on the Chess record label. Only one of the songs on that record also appears here on this Dave and Phil Alvin tribute (“Just A Dream”).

“When I first discovered Big Bill Broonzy, his voice and his songwriting, his humor, his guitar playing, his persona was so big to me. I became a Little Bill Broonzy guy; started singing the songs I heard on the first album I got almost immediately, and I’ve always had him in the back of my mind whenever I would sing and play.” – Phil Alvin

Big Bill Broonzy (born Lee Conley Bradley) was an early Mississippi Delta Bluesman, who like many moved north to Chicago to pursue his craft. His vivid story telling songwriting skills, combined with slick flat-picking guitar and vibrant singing influenced a multitude of artists who followed, including Muddy Waters, Willie Dixon, Eric Clapton, Pete Townsend, Ray Davies, and Ron Wood. Broonzy published in excess of 300 songs in a variety of blues styles covering the many-splendored spectrum of blues during his long and diverse career that spanned from the late 1920s through the late 1950s.

Phil and Dave Alvin are founding members of the L.A. band The Blasters, a group that blends all styles of American roots music, with a heaping helping of The Blues. Before that, Phil Alvin was a member of Big Joe Turner’s backing band, along with keyboardist Gene Taylor. Taylor would spend 4 ½ years in the Blasters, and appear on four of The Blasters LPs before moving on to be a part of another rootsy feel-good band; The Fabulous Thunderbirds. Taylor’s presence on this record is hugely felt, with his genius being akin to the piano work of Pinetop Perkins; that is, knowing just what to play to enhance enhance each song consummately.

The record is split into two different bands. Don Heffington, the drummer/percussionist for Big Mama Thornton, Big Joe Turner, Johnny Otis, and others is on roughly half of the songs. He also had appeared on Dave Alvin’s Eleven Eleven, West of the West, and Ashgrove releases. In addition, he has toured with such notables as Lowell George, Emmylou Harris, and Lucinda Williams. The other drummer used is Austin, Texas born Lisa Pankrantz, who has toured with Dave Alvin in the group Dave & The Guilty Ones. The bass work on the album is split between Brad Fordham, who also appeared on Dave’s Eleven Eleven record, and plays acoustic and electric bass. The other bassist is the much acclaimed Bob Glaub. All these fine musicians have a voice in making this wonderful album.

“All By Myself” lopes along with a classic Hot Tuna sunny strut with Phil and Dave combining their vocal talents in a call and response method that is highly effective. The acoustic instrumental breaks that occur between the verses yield the vocalizations just that much sweeter. The Alvin brothers do not closely harmonize like Phil and Don Everly or Brian and Carl Wilson, but their voices do blend together in a manner that is very effective with a deepness of feeling. Dave Alvin plays the lead guitar on a National steel bodied resonating guitar whose tones are acknowledged as the sound of “authentic as it gets” blues.

The second selection, “I Feel So Good,” could be the title of the album. It’s so packed with a bursting helping of joyful noise. Acoustic and electric bass from Brad Fordham and honky-tonk piano from Gene Taylor make it readily apparent that these boys all feel so very good. In the song, Dave Alvin has a couple super-fine electric guitar rockabilly/blues leads that join with the jam-kicking drums from Lisa Pankratz to form a beefy back-bone to which Phil Alvin supplies his super-impassioned vocal.

Phil Alvin’s father had played many musical instruments. He taught Phil to play the harmonica at a very early age, with Phil learning difficult songs like “Popeye, the Sailor Man” when he was only six years old. The technique of “tonguing” the harp was quickly picked up by Phil, and on this album he shows off his harmonica abilities to great advantage.

The song “Southern Flood Blues” features Dave’s deep baritone vocal, the perfect vehicle for story-telling, a la Johnny Cash. Contained therein is a lyric: “It was dark, and it was raining, you could hear that howling wind.” After which Phil’s harmonica proceeds to howl like a cyclone and Dave’s guitar plays up a storm. Masterful bassist Bob Glaub, who has recorded with the “who’s-who” of artists maintains the steady threatening pulse up front. A great song with poignant lyrics; a passionate performance is achieved by all.

An acoustic rendering of “Key to the Highway,” one of Broonzy’s best known compositions is another delight. This rendition is impeccably articulated, exquisitely nuanced, and infused with a large dose of life’s pain, yet presented with a life-affirming joy. Dave Alvin once again plays the National steel bodied resonating guitar to sweet precision.

“Tomorrow” has a juke-joint shuffle meets Texas-swing feel with the piano work of Gene Taylor again adding abundant atmosphere. On “Big Bill’s Blues” the song has an optimistic outlook comparable to when you are lying down in the gutter and there is no way but up. Phil’s vocal is distinctively memorable.

The aforementioned classic song “Just A Dream” features one of Phil’s finest vocal performances in a song that showcases some of Big Bill’s finest ironic lyrics. Dave’s guitar mimics the early rock and roll feel of Chuck Berry while Gene Taylor’s twinkling piano again intensifies the song’s effect adding profundity and presence. Phil’s harmonica work is once more an alluring and augmenting charismatic force, as it proves to be on roughly half of the songs on this album. Phil’s harp play always fits the songs like a tailored glove. The premise of the song lyrics rests in all these outrageous wonderful dreams turning to dust upon the awakening of the dreamer.

“How You Want It Done?” contains a boogie-woogie rhythm and yet another squarely on the money Phil Alvin vocal. His vocal treatments consistently sound oh-so right. On “You’ve Changed,” Dave provides the vocal lead and sinister electric guitar on this dark bluesy song amidst Gene Taylor’s insistent piano. Brad Fordham provides a thumping bass that is guaranteed to get your booty shaking. Broonzy’s lyrics concern a young simple Cajun girl raised on rice and beans who transforms into something completely different upon coming up to the big city of Chicago.

Phil’s harmonica is front and center on “Stuff You Call Money,” one of the highlights contained on this outstanding and masterful recording. Dave and Phil share the vocals that communicate throughout the song the ever-relevant Blues theme about the role money plays in life. You indeed must have the stuff they call money, way down deep in your pockets, if you want to acquire even the basic of life’s necessities, much less the finer things.

An upbeat Blues shuffle called “Truckin’ Little Woman” has Dave on electric guitar that brings to life the early guitar greats of Rock and Roll royalty. The final song is the lone instrumental on the release called “Saturday Night Rub,” and it is short but honey sweet.

This high quality release is available on 180 gram vinyl or CD. On this, their first full release together in decades, they pull out all the stops and achieve a level of rollicking ruckus that proves delightfully satisfying deep down in my blues-loving heart.

“Through years of growing up together, making music together, through times of success, disappointment, tragedy, distance, triumph and closeness, Big Bill Broonzy remained, in may ways, our shared musical square one. Our common ground.” – Dave Alvin