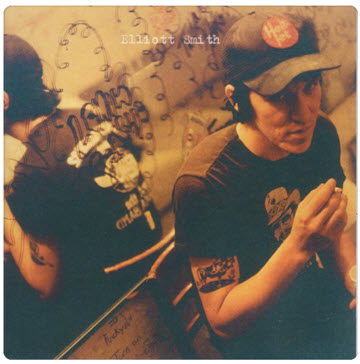 A shaky video recording blinks ‘January 31,2003’ in the top corner, and Elliott Smith strums the final notes of an acoustic “Pretty (Ugly Before)” on a scuffed-up stage. He graciously thanks his audience when someone in the crowd hoarsely yells “Get a backbone!”

“Get a what? A backbone? What the fuck?”  Smith responds, nervously running his hands through his hair, his inverted knees shaking. He struggles through his agitation, plays a violent note on his guitar and considers the words deeply. “I could tell you a dream I had last night, otherwise I couldn’t be more fucking for real. Get a backbone…Okay. I’ll try.”

As an artist, Smith had ample backbone. Although introverted and soft-spoken, Smith didn’t shy away from vulnerability and unabashed honesty in his music. Through his evocative lyrics, he fearlessly confronted the issues that plagued him: Early childhood abuse, alcoholism, drug use, depression – So, sitting on a lone stool onstage at the Henry Fonda theatre in Portland, it’s understandable why he was rattled by the moronic suggestion that he had a lack of fortitude.

But on October 21st of the same year, Smith would commit his first and last act of spinelessness, when he took his own life by savagely stabbing himself in the chest. He was 34.

This is not the anniversary of his untimely death, a hall of fame announcement, or a re-release of a remastered album. Elliott Smith needs no occasion to be remembered and celebrated as an architect of indie music and a ground-breaking songwriter.

Even if you’ve never heard of Elliott Smith, you’ve likely heard some semblance of him without realizing it. Whether you’re into The Shins, Iron and Wine, Ben Gibbard of Death Cab for Cutie, Bon Iver, Sufjan Stevens ,or Conor Oberst of Bright Eyes </a>and Monsters of Folk – all have been influenced directly or indirectly by Smith. These bands, while distinct, all feature or have experimented with the low-fi, confessional indie vein that Elliott Smith was known for. Some are more deviant, retaining elements of the stark, confessional voice and incorporating lush melodic textures that new technology allows for (Bon Iver). Some of the impression is immediately apparent, like that of Oberst, who cited Smith as one of his main influences:

“Sometimes when you’re not feeling good, you have to listen to really sad music like Elliott Smith’s. He wrote the sweetest, saddest, most gentle songs. Through his music, he had the ability to answer feeling in others that he was unable to answer in himself.”

Elliott Smith’s music is an enticing anomaly; the timbre of his voice can occupy the realms of anger, apathy, or tenderness – all without overwhelming the lyrics, which are often at odds with the sweetness of the music. This creates a musical ambivalence, and an emotional proximity that’s unparalleled.

His third solo album, Either/Or, released in 1997, was a masterpiece filled with simple, addictive chord changes, cascading melodies and trembling vocals which were flawless in their imperfection. Smith rose from near-obscurity when his music was discovered by director Gus Van Sant (also a Portland, Oregon resident) and featured in the Good Will Hunting soundtrack. Smith was thrust into the public eye when “Miss Misery” was nominated for Best Original Song at the 1997 Academy Awards, and he was asked to perform the song live. Clad in a white suit, he played for the star-filled audience with his eyes to the floor, against an invisible string accompaniment – puncturing the pretence and the glitz. He lost out to Celine Dion’s “My Heart Will Go On”.

The exposure he received from the Oscars propelled his next album, XO, to become the best-selling release of his career. When the media got hold of him, they labelled him as a depressed, sensitive, misunderstood punk. Although Smith loathed conventional labelling and gimmicky media, they were right about the heavy depression that he struggled with.

… “Depressing’ isn’t a word I would use to describe my music. But there is some sadness in it – there has to be, so that the happiness in it will matter.”

The lyrics to Waltz #2 (XO) impart Smith’s songwriting talent and tendencies: the narrative and perfect rhymes echo The Beatles, one of his main musical influences.  However, the lyrics also contain sentiments of self-doubt and abuse – recurring themes in Smith’s songwriting – which are widely believed to be biographical:

” First the mic, then a half cigarette

That’s the man that she’s married to now

That’s the girl that he takes around town

She appears composed, so she is, I suppose

Who can really tell?

She shows no emotion at all

But I’m going to love you anyhow“