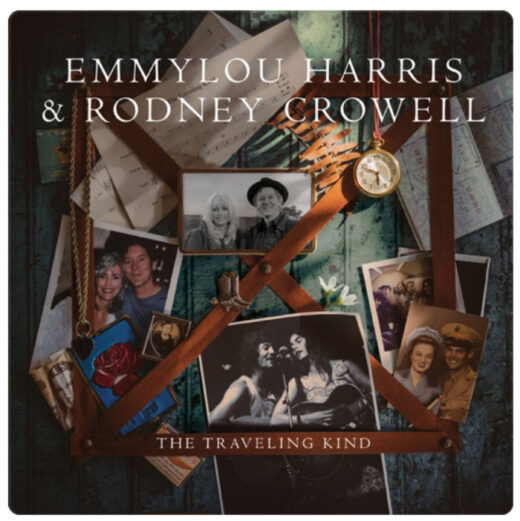 The second album of duets with the legendary Emmylou Harris and her longtime friend Rodney Crowell is a special occasion: their first album together back in 2012, Old Yellow Moon, was mostly an album of covers, whereas this new release highlights the combined songwriting talents of both. The lyrical and musical talents of Crowell place him in the top pantheon of country music, but when Emmylou sits down to write it isn’t often; the results, however. are always memorable, and in that respect the new album, The Traveling Kind, complements the considerable accomplishment of Old Yellow Moon.

“I find myself feeling really good as a vocalist, singing with Emmy. That feeling opens the doorways where I hunt and find things that I might probably wouldn’t do on my own. The last two or three years that Emmy and I have been working together have been very beneficial to me as a singer. I would presume that the flipside of that is that Emmy may feel good about herself as a songwriter.” – Rodney Crowell, 2015 interview

“I’m a member of the church of serendipity. My whole life has been just one little surprise after another.” – Emmylou Harris, 2015 interview

By contrast with the previous release, The Traveling Kind is considerably more adventurous, both musically and lyrically. Both Rodney and Emmylou take more chances with their material. Yet this is still very much a country record, as well as being an alternative to traditional country. The songs are deep, philosophical and yet retain that mordant wit whereby Crowell earned his reputation, all backed by Emmylou’s eternally ethereal vocals and some of the sweetest instrumental playing you’ll ever hear.

Key tracks: “You Can’t Say We Didn’t Try”, a country weeper, the up-tempo “Bring It On Home to Memphis”, which might well be an entreaty to Lucinda Williams to return to her own up-tempo past, ” and the true keeper of the record “The Weight of the World”, which is a politico/enviro/ jazz-infused rocker. This tune alone is worth the price of admission to the album. Musically, it’s one of the strongest numbers Crowell has ever written – with its jazzy chords, hot drumming and stinging guitar, it’s a number you’ll want to hear over and over again.

The title track, “The traveling Kind” is a compelling tribute to the troubadour’s life on the road and a fitting closer to the top Country/Roots album of 2015.