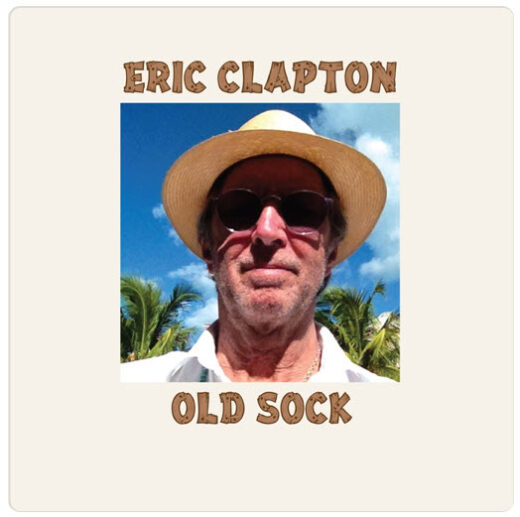 Born in 1945 in rural Ripley, England, Eric Clapton received his career calling to become a professional guitarist at an early age. After unearthing the works of the master bluesmen and heeding their lessons his life’s course was set. He later would add the skills of songwriter and vocalist to his repertoire. Through the years he has traveled many diverse musical roads and mastered many different styles, always displaying an unvarying level of craftsmanship along with an ability to deeply stir the emotions of others with his great gift. He remains indisputably one of the greatest and most influential guitarists of all time with a distinctive sound that is all his own.

For his new release Old Sock, Eric Clapton has left the major labels for the liberating comfort of his Bushbranch imprint of the Surfdog label. If you recall “Hello Old Friend” from Eric’s No Reason To Cry, that song’s vibe is very much present here. Eric says hello to many of his old friends who have greatly assisted him on past recordings and tours through the years. These friends include Henry Spinetti, JJ Cale, Chris Stainton, the inimitable Steve Gadd, Willie Weeks, Tim Carmon, Steve Winwood, Jim Keltner, and Doyle Bramhall II. Much of the record consists of Clapton’s covers of some favorite songs of enduring popularity, with three of these pulled from the 1930s. In ways Old Sock recalls his time spent with Delaney and Bonnie when the music was played for the pure love of it. This album reflects the matured Clapton, enjoying life and making music for his own gratification.

Eric Clapton begins the album with “Further on Down the Road” not to be confused with the Bobby “Blue” Bland blues classic “Further on Up the Road” that Clapton has held on to as a fixture in his concert set-list and recorded on several occasions, perhaps most notably on The Band’s “Last Waltz” documentary. Here it’s the Taj Mahal/Jesse Ed Davis song (both guitarists of note), and it’s done with a reggae slant and an assist from guest Taj Mahal who plays good quality harmonica on the track. It’s reggae in that it has that strong syncopated reggae rhythm, but it’s missing the standard social protest reggae lyric, instead being a story of lost love. Clapton adds some engaging licks near the song’s conclusion.

JJ Cale’s previously unreleased “Angel” gets fortification from JJ Cale on vocals and guitar. As in the past, Clapton truly shines on Cale’s material, with it strongly paralleling his own. EC has enjoyed huge triumphs covering the Cale songs “After Midnight” and “Cocaine.” The twin guitars of Clapton and Cale are understated, but attractive in their interplay, with beautiful spirited tones in attendance.

The first 1930s chestnut performed on Old Sock is “The Folks Who Live on the Hill.” The Jerome Kern & Oscar Hammerstein II composition is done at an extremely leisurely pace with EC fondly ruminating on each and every word. Frank Marocco offers tender accordion to the acoustic rendition that meanders along like a stroll through a flower garden in springtime.

One of the two new compositions written in part by Doyle Bramhall II titled “Gotta Get Over,” is a vigorous blues rocking booty shaker and one of the finest songs on the release. Clapton’s guitar sings majestically, the drumming is insistently superb, and special guest Chaka Khan adds her characteristic soaring funk-soul background vocals to the mix. The wah-wah rhythm guitar gives Clapton a perfect trampoline to spring from and regally launch his nimble-fingered solos. Clapton’s vocal is deeply rich with just the right amount of bluesy grit.

“Till Your Well Runs Dry” written by Peter Tosh, founding member of Jamaican legendary group the Wailers, contains a superb Clapton vocal, harmonizing background vocals, and a melody that goes from medium tempo blues to reggae lilt on the chorus. Quite a few songs have been written from the adage “You don’t miss your water, ‘til your well runs dry.” Eric slowly sings the sincere tale of the cheating lover on the verse, before bouncily spitting out the refrain “whatcha gonna do …..” Clapton places a short, but oh-so sweet, guitar solo past the half way point that wraps the song package with a bright bow.

Paul McCartney duets with Eric on “All Of Me.” the pop/jazz standard from the 1930s. The song is a standard because it has stood the test of time, has been hugely popular, and has been covered by numerous artists. The most famous of these is probably the Louis Armstrong version, but Willie Nelson’s take on his Stardust album was also quite popular. The cover take here is lightly jazzy with excellent guitar interplay, old-time saloon style piano, and of course wonderful vocals by all involved, including the back-up singers.

The bluesy/country honky-tonk arrangement on “Born To Lose” is inspired with Eric rivaling Ray Charles for vocal sincerity. Greg Leisz on pedal steel and Gabe Witcher on fiddle, along with the other talented instrumentalists, swing deep in the pocket forming a strong backbone for Clapton and his trusty back-up singers.

EC’s cover of the late/great Gary Moore’s signature song “Still Got The Blues” reveals the song in a different light, putting a sharper focus on Clapton’s soulful vocals as opposed to Moore’s blistering guitar approach. Performed in a slower tempo with Steve Winwood recreating his Hammond B-3 “Voodoo Chile” groove alongside piano, it serves as a wonderful tribute to Moore. The first solo is taken by Eric on acoustic and the second is Winwood’s organ with strings added and Clapton switching to searing electric guitar weeping the blues. It is a high charged emotional tribute to Gary Moore and brings tears to my eyes. To me this is the pinnacle of the album.

I can just imagine Eric and Doyle sitting together on folding chairs playing “Goodnight Irene” in much the manner that they performed some songs on the DVD that accompanied Clapton’s “Sessions for Robert J.” The pairing of Clapton’s slide-guitar with dobro and fiddle add rustic spice to Leadbelly’s classic and the sing-along participation near the end of the song brings back countless great memories for me.

The drumming on the entire album is outstanding. Of course with such longtime luminaries as Steve Gadd, Jim Keltner, and Henry Spinetti handling the percussion this should come as no huge surprise. The luxuriant background vocalists are omnipresent and beyond doubt add a lot to the proceedings. The stellar production on Old Sock is jointly credited to Eric Clapton, Doyle Bramhall II, Justin Stanley and Simon Climie.

A cover of Otis Redding’s “Your One and Only Man” is given a reggae twist with Clapton providing his patented bluesy growl vocals. Tackling an Otis Redding song, who many consider one of the greatest singers in popular music, requires a lot of self assured confidence. This daunting task might not have been attempted by a younger Clapton. But now, he pours his soul into it and smoothly succeeds.

The second Bramhall/Justin Stanley/Nikka Costa debut composition has a blues/gospel meets reggae personality and Eric adds some exceptionally beautiful guitar embellishments. “Every Little Thing” would agreeably fit on any of Eric Clapton’s solo recordings over the years, boasting a timeless quality. The back-up chorus vocals, are catchy, and near the song’s end Eric sings “let the children sing.” That request is then carried out by Clapton’s daughters Julie Rose, Ella May, and Sophie Belle adding an informal homey touch.

Eric closes the album with another 1930’s standard from The Great American Soundbook titled “Our Love Is Here To Stay.” Written by George and Ira Gershwin, it ends the album on a melancholy note, waltzing along with a sparse arrangement centering on Clapton’s plaintive vocal and piano accompaniment. The chorus “In time the Rockies may crumble/Gibraltar may tumble/They’re only made of clay/But our love is here to stay” is thoughtfully and adeptly sung by Clapton.

Eric Clapton maintains a rare capacity to draw upon his inner self for musical expression and channels this faculty like few artists. Those that can are able to endure and remain popular through changes and passing trends. He admirably bears his maturity quite well. The work here has a deeply personal feel while deftly molding the contributions from a lengthy list of contributors. If you too are a dedicated Eric Clapton follower and intensely liked Reptile and Back Home, then it’s a safe assumption that you also will enjoy Old Sock. I know I surely have, and I’m positive that I will continue to be gripped, dramatically, by his entire catalog as long as I live and breathe.