Essentials: ‘By The Time I Get To Phoenix’ Review 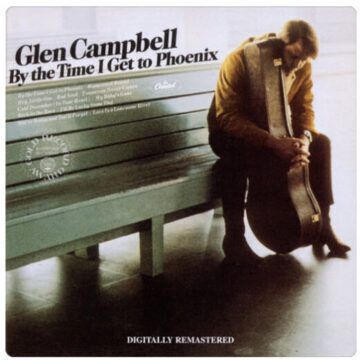 Jimmy Webb is the premier individual pop composer (I am excepting songwriting teams such as Lennon/McCartney and rockers Jagger/Richards) of the past sixty years, and his masterwork “By The Time I Get To Phoenix” sets a standard that will not soon be equaled. Frank Sinatra called it “the greatest torch song ever written”.

If the twentieth century has been called the century of the guitar, Jimmy Webb should logically have found another century for his tunes. He only ever composed one song with a guitar, and it‘s not one that many people have ever heard (“Ocean in His Eyes” from 1973).

His groundbreaking book about songwriting, Tunesmith, published in 1998, shows Jimmy at a grand piano, his preferred instrument for composition. He also is an occasional collaborator, which means he takes the credit for both music and lyrics on most of his tunes. Now the funny thing about Webb is that his songs have been named both the best and the worst. “Wichita Lineman”, “Up, Up and Away” and “Phoenix” have received accolades from almost everyone, while one of his biggest hits “Macarthur Park” is reviled in many quarters as a cake that should never have been baked. As for me, I think Webb has seldom, if ever, written a bad song. He is too good, too much in touch with what he is doing, so much so that he never writes anything by accident. And by the way, if you‘ve ever heard “Macarthur Park”, and who hasn‘t, you probably haven‘t forgotten it. It’s an earworm first class.

Glen Campbell has been widely acknowledged as the greatest interpreter of Webb‘s songs, but I didn‘t properly appreciate Campbell‘s talent when he was having his hits with this almost too polished material. For one thing, they sounded like hits. They were three minutes or less of AM radio perfection, and once they got into your brain they were there for good, but at the time the fashion was for FM radio and long cuts – up to 20 minutes for a single tune, time that permitted the DJ to step outside for one of those cigarettes people passed around.

Now Isaac Hayes was no slouch of a songwriter himself, having been half of the Stax songwriting duo Porter-Hayes, who had written “Soul Ma” and “Hold On, I‘m Coming” for Sam and Dave. Hayes was charged with coming up with a solo album after the unfortunate plane crash death of the Stax label headliner Otis Redding. What he came up with was the most successful of all the Stax artists’ attempts that year at restoring prosperity to the soul label.

Hayes didn‘t believe in short songs, despite the hits he had written for Stax. Most of his numbers went five minutes or more, and he brought a gospel attitude towards everything he did, even when he turned that gospel into funk. He had that John Lee Hooker penchant for bringing the deliberately worked-up semi-hysteria of a gospel preacher‘s sermon to standard pop material. Time after time with such unlikely sources as Hal David-Burt Bacharach‘s “Walk On By”, or Ruby and the Romantics’ “Our Day Will Come” (which featured a spoken intro where he assumed the role of a soldier going off to war) Hayes took ten minutes or more to say, eloquently, what had previously been said in less than three minutes.

“By The Time I Get To Phoenix” was 19 minutes long when Hayes recorded it, occupying the entire side of an LP (Hot Buttered Soul) . For many years I loved it, but I find myself these days going back to the perfection of Glen Campbell‘s voice, diction and calm. That said, Hayes understood the meaning and potential of rap long before the talentless toadies of the late 20th century glommed on to a way to meld mediocrity and marketing. Hayes was a true rapper, and paved the way for Gil Scott-Heron’s groundbreaking work two years later in 1970: “The Revolution Will Not Be Televised”.

Campbell began his career in the late fifties, playing guitar with such noted groups as The Champs, The Beach Boys, and Phil Spector‘s Wrecking Crew. He got his big break as a solo artist by recording John Hartford‘s “Gentle On My Mind” in 1967 and then had a monster hit with “By The Time I Get To Phoenix” the following year. Each of these recordings delivered a Grammy Award to Campbell, who in 1966 had been on the verge of being dropped by Capitol Records for lack of sales. He continued to work with Jimmy Webb for a few years, singing tunes like “Wichita Lineman” (one of the most achingly beautiful songs ever written) and “Galveston”.

For me, Jimmy Webb is the Mozart of our times, unifying words and music to produce songs that will last for another hundred years. His own rendition of “Phoenix” is a revelation for its understated approach. We’re so familiar with the hit version of this tune that Webb’s original itself sounds like a daring cover. Webb is a perfectionist, who more than anyone has articulated the answer to “what is a song?” In Tunesmith, the modern Bible for songwriters, he said,

“A song is a magical marriage between a lyric (some words) and a melody (some notes). It is not a poem. It is not music. It is in this grey area of synthesis between language, rhythm and sound that some of the most acute of all sensors of human emotion lie.”

“By The Time I Get To Phoenix” has been recognized as the third most performed song between 1940 and 1990. It is also one of the most widely recorded. Jimmy Webb‘s song is so strong that it enables the singer to bring his or her individual artistry to a composition that offers up an unforgettable tune married to some of the best lyrics ever written.