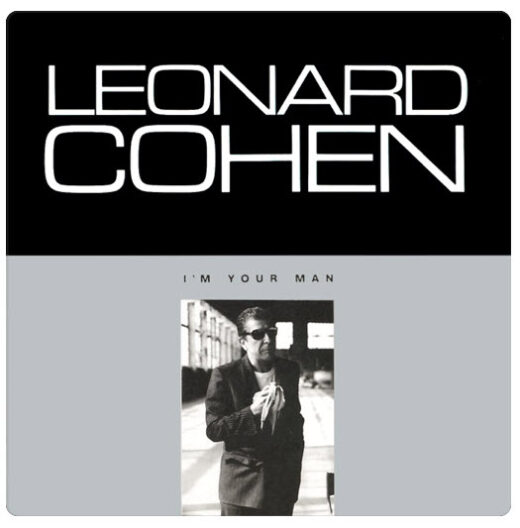 Leonard Cohen’s transformative album I’m Your Man was released in February of 1988, a lifetime ago in popular music terms. Yet how and why does the album still sound so fresh, so filled with new ideas? With his trademark irony he titled his album from early 2012 Old Ideas, as though with his advancing age he were capable of having only those perceptions given to the ancient. However the older Cohen gets, the younger he writes.

The opening track from I’m Your Man is the seminal, genre-blasting, crypto-fascist “First We Take Manhattan”. Take it on its own terms, and think of the song as though Jennifer Warnes had never loaned her ethereal pipes to her own version on her Cohen tribute Famous Blue Raincoat. Cohen never sounded stronger than with the confident, almost arrogant character in this tune.

The lyrics are both impenetrable and hilarious, dealing with a solipsistic force aiming for world domination, though with the self-knowledge that he may only succeed in becoming the apocryphal legend in his own mind. The instrumentation is fierce, the background singers sweet but not saccharine, and the impact so far beyond anything he had recorded in previous albums it’s nothing short of shocking, somewhat similar to Dylan’s embrace of the electric guitar at the height of his folk fame.

“They sentenced me to twenty years of boredom
For trying to change the system from within
I’m coming now, I’m coming to reward them
First we take Manhattan, then we take Berlin”

The sentiments aren’t much different from much of the content on his first solo album, particularly “The Stranger Song” and the neglected masterpiece “Thin Green Candle”, but Cohen has, with the confidence of final desperation he exudes here, moved so far from folk music it’s such an unexpected reversal of form that we’d be no less surprised than if Prince had recorded a Woody Guthrie ballad.

The next tune, “Ain’t No Cure For Love” shows the desperado with a heart, the flip side of his classics “So Long Marianne”, or “Hey That’s No Way To Say Goodbye”. It’s particularly instructive to look at the lyrics and note how deeply he has embraced the vernacular. In fact, the farther he gets into the album, the more we see that with his album he truly matured as a songwriter, and transformed himself into one of his idols, those being Hank Williams (more on that later) and Ray Charles. Cohen is less a poet singing his poems on this record than on any other he has ever made, which is why the album still sounds fresh. His specificity with earthly, contemporary images is evident in “I’m Your Man” as opposed to his early works which drew on, well, shall we say ‘old ideas’ such as “The Story of Isaac”, or “Joan of Arc” or the ancient melodies and gypsy violin of “The Gypsy’s Wife”.

“Or I’d crawl to you baby and I’d fall at your feet.
And I’d howl at your beauty like a dog in heat.
And I’d claw at your heart.
And I’d tear at your sheet.”

And of course, there are the famous, quotable lines “If you want a doctor, I’ll examine every inch of you.”

The one questionable note on the record comes with “Jazz Police”. Not that I’ve come to know it all that well. Despite owning this record since it came out I doubt that I’ve heard this song clean through more than half a dozen times. Lord knows I’ve tried, and I guess I can either regard it as something beyond my ken, or Cohen can view me as a failed experiment. Or perhaps over time he has come to agree with most of the musos I know who’ve formed a, well, somewhat less than complimentary view of this composition. The drumming by the notable Vinnie Colaiuta is worthy of many a Steely Dan cut, but here the whole thing just doesn’t jell.

He’s back on form with the next track with “I Can’t Forget” and its unforgettable lyric, at least to those of us who have aged along with Cohen. Never was a better song about losing your mojo. Not a one.

The album closes with “Tower of Song”. It’s hard to imagine the Cohen catalogue without this number. Sure, he’s got a boatload of priceless gems in his oeuvre, but this simple plinkety-plonk of a tune says it all. It might be his disarming honesty, it might the way Jennifer Warnes’ exquisite vocals complete his gruff, smoky confessional, it might be his humour (“I was born like this, I had no choice, I was born with the gift of a golden voice”), or it might be his utter devotion to his craft, but no one ever wrote a better song about songwriting. He evinced these same sentiments years ago when he wrote “I came so far for beauty, I left so much behind”, but his colloquial voice here, his simplicity and his contemporary orchestration, that’s what will live on.

The production credits list Roscoe Beck and Jennifer Warnes among many others, but it’s the contributions of those two that shine. Warnes is one of the premiere vocalists of the past fifty years, whereas Beck has worked with Robben Ford, James Cotton, The Dixie Chicks, and many others. He is also a superb bassist and has served as Cohen’s musical director on many of thie extensive road tours. It’s also no coincidence that he produced Warnes on her Famous Blue Raincoat album. It’s his influence, I will speculate, that forced Cohen out of his folkiness into the mastery of song that brought him millions of international fans.

In short, I’m Your Man is an Essential recording from the finest songwriter Canada has ever produced.