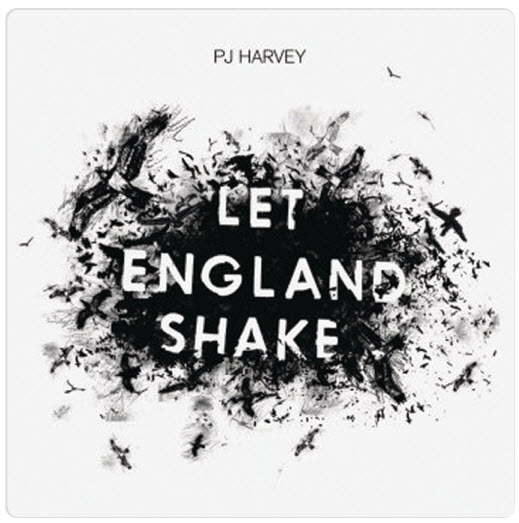 Dark, brooding and bitter is Let England Shake yet it’s a mixture that will draw you back to its muted complexity time after time. PJ Harvey has never been known for making things easy or familiar; she recently told an interviewer that ‘my biggest fear would be to replicate something I’ve done before.” Yet familiarity is what most music fans seek. They won’t find it on Polly Jean Harvey’s essential album released back in 2011.

For one thing, several of the songs are about the carnage of war, and particularly about the brutal battlefield of Gallipoli, an event that occurred more than a hundred years ago.  “Let England shake’, she sings, ‘weighed down with silent dead’. If the tune weren’t so glorious the song would be frightening.

Then on ‘The Last Living Rose’ we hear PJ sing of ‘the damp grey filthiness of ages, fog rolling down behind the mountains and on the graveyards and dead sea captains.” It’s as if Fairport Convention met up with her PJ’s mentor Captain Beefheart and gave birth to a lone folksinger standing in the midst of a rioting city while those around her drown in sewage.  Yes, that’s pretty much what’s going on in ‘Written On The Forehead.’

It’s compelling stuff though, from an artist at the peak of her powers, one who is unafraid of what those around her might think. This was her 11th album  and it’s unlike any other in her catalog. It exudes brilliance, seems to have been recorded mostly live, and appears to have been a process of catharsis for the writer. The songs are devoid of any commercial considerations yet this is probably her most accessible album to date. You’re gonna love , or you’re gonna hate these wonderfully dark yet lyrical tunes that spell out so clearly the ravages of war and the generational consequences of far-off events.

The sound is a little muddled, but deliberately so, as if recalling a dream. PJ has deserted the piano of her former works. The instrumentation is mostly guitar and autoharp, supported by longtime band member John Parrish and former Bad Seed member Mick Harvey. Out of tune trumpets, bugles, and the odd xylophone show up mysteriously throughout the work, recalling the wartime soundscape and reminding the listener of how strangers and strange events emerge in our own lives.

You might think it has nothing to do with rock and roll, until that is, you hear PJ reference the Eddy Cochran line from “Summertime Blues”. You know the one: “I’m going to take my problems to The United Nations”.

Haunting yet beautiful, artfully composed, sad and bad to the bone, this album is an essential work from one of the most provocative and accomplished musicians of our time.