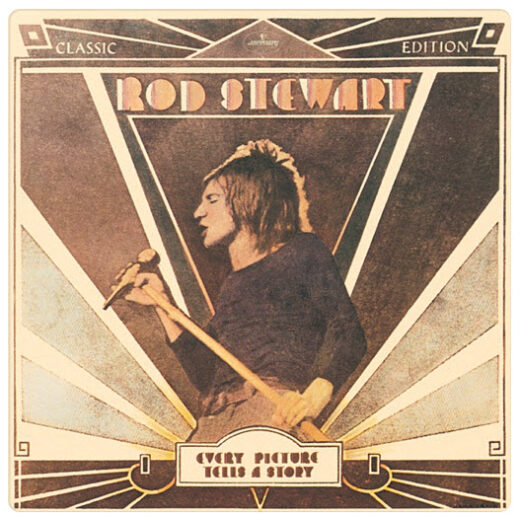 It‘s going on 50 years since Rod Stewart released this masterpiece. Of the nine tracks on the album, seven or eight of them are unforgettable. Does anyone today believe that today’s artists will merit even a footnote in musical history fifty years from now in 2070?

A recent broadcast on CKUA radio (a great public radio station available on the Internet) by the renowned DJ Terry David Mulligan drove me back to Rod Stewart. He said on his show, and I quote him loosely, “three or four times a week people come up to me, referring to the current music scene, and ask in obvious desperation “Is music really this bad?” Mulligan reiterated he forces himself to listen to new music constantly, hoping to find something compelling. Well so do I, and lately I‘ve been trying to find something I can listen to for more than a week or two. Then I dig out my old vinyl and it‘s clear to me that the newer artists have a habit of assembling albums that are basically one track done a dozen different ways.

For one thing, Rod Stewart could really sing. He had a cracking band behind him, which included Ron Wood on electric guitar, Martin Quittenton on acoustic guitart, Mick Waller on drums, and Ian McLagan on organ. Not to mention Maggie Bell and Long John Baldry as backup singers. It‘s hard to believe that Rod started out so unsure of his voice he experienced stage fright even in the studio and couldn‘t face the band during the recording of his vocals. Maybe it‘s something to do with having long blonde hair – Dusty Springfield experienced the same vocal insecurities.

The Every Picture Tells A Story album opens with the title track – a wonderful rocking tune co-written by Stewart and Ron Wood – it‘s said to be an autobiographical treatment of Stewart‘s departure from home and his first romantic adventures.

The classic Maggie May is also on this album – it‘s an alternate take on the coming of age theme, and it‘s a song that has been overplayed. Leave it alone for five or ten years and then go back to it; you will be amazed with its insight, its tenderness, and its humor. The album version contains the brief but inspired acoustic guitar intro which is seldom played on the radio. Maggie May is followed by Mandolin Wind, arguably the best song on the album, for its wonderful lyrics, great melody, and amazing musicianship on mandolin and guitar.

Here‘s where Rod triumphs over just about any current singer – he‘s capable of taking the listener in many different directions in 30 or 40 minutes, from the exuberance of straight ahead rock to the intimacy of romantic regret. And then there‘s the real rocker on the album (I Know) I‘m Losing You, a Motown song that Rod kicks up to a new level – heartbreak and despair gives him the strength and determination to tell it like it is. Maybe only Solomon Burke could have done it this well.

I agree with Terry David Mulligan when he says he listens closely to the final track on an album as evidence of the artist‘s statement. In Rod Stewart‘s case, he chose one of the most beautiful songs of all time, Reason to Believe, written by Tim Hardin, revered in many quarters and overlooked in far too many more. Hardin was a singer-songwriter supreme, a precursor to James Taylor and Ron Sexsmith and anyone who ever united truth and beauty on the stage. Stewart more than does Hardin justice – he redefines the song. Where Hardin falls into despair over the hopelessness of his dedication to an unfaithful lover, Stewart seems to find joy in his belief that his love will prevail. The final statement on the album is one of happiness in the most difficult of circumstances. His performance is a vocal treasure. This is an essential album – worth your time and attention in its entirety.