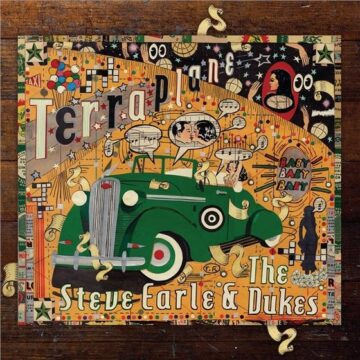 Sounding for all the world like a melding of an older version of himself conjoined with the early Tom Waits, Steve Earle was in top form back in 2015 with his divorce album, Terraplane. His breakup with the noted (and very talented) country singer Alison Moorer is achingly summed up in ‘I’m Better Off Alone’, but the rest of this recording is bluesy and filled with lyrical ironies that provide sonic pleasure to the extreme. It’s carnal and hypnotic, which cannot be said for most of Earle’s work.

There’s even an old-timey number ‘Baby’s Just As Mean As Me’, a duet with Eleanor Whitmore, that harkens back stylistically about 75 years or so, but for the words, which are deliciously contemporary and secretly salacious. So wha’ happened?

The key tracks are three: the opening number ‘Baby, Baby, Baby’ featuring a terrific blues harmonica and some uncharacteristic growl in the vocal from Steve signals we’re in for something new and different. Key track two is ‘You’re The Best Lover That I Ever Had’, a celebration of physical chemistry that is about as far removed from ‘Copperhead Road’ as one might imagine. The third hot tune is ‘King of the Blues’ – a simmering slow-burner that conjures up a swagger and cock of the walk self-confidence that might be unseemly in anyone else just turned 60, but seems perfectly natural to hear it from this new, improved Steve Earle. The track closes the album, but opens up a new whole new side of Steve that this listener for one is thrilled to hear.

That said, my favourite track here is the half-spoken, half-sung ‘The Tennessee Kid’, strongly reminiscent of the afore-mentioned Tom Waits at his best. It’s a great story and a terrific vocal, conjuring up the Devil himself and the legendary Robert Johnson, who famously recorded a tune called ‘Terraplane Blues’ one of the most influential blues numbers of all time. Great as many of the rest of the tunes on this record are, I think ‘The Tennessee Kid’ is the real keeper.

And throughout the album is Steve’s splendid guitar work – he’s a true virtuoso whose oft-praised fretwork has never been put to better purpose.