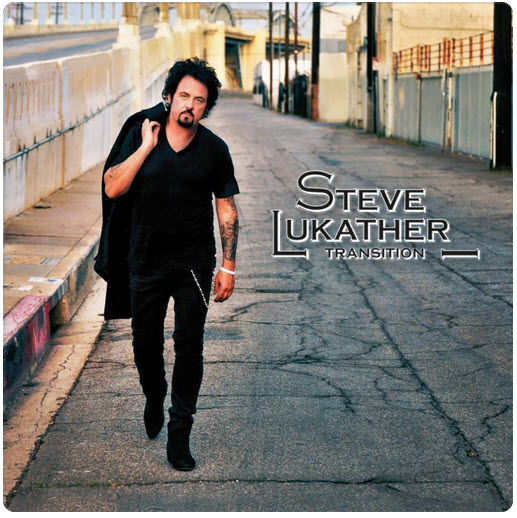 Well known as a founding member of the rock group Toto (which released its 14th studio album Toto XIV in March of 2015) and a notoriously seasoned much-in demand A-List session guitarist; Steve Lukather (known to many as “Luke”) is also a wonderful songwriter, skilled arranger, noted producer and cleverly adept vocalist.

Transition, his seventh solo recording, and his second on the Mascot Records masthead, is an abounding mixture of satisfying melodic rock, pop, blues, and funk/jazz-tinged music. Containing a solid batch of quality songs, this diversity of genre and ambiance makes for an extremely gratifying listening experience.

The pristine production on Transition is the product of the collaborative efforts of Lukather and fellow Renaissance man C.J. Vanston. Vanston, in addition, plays keyboards, sings back-up, and shares co-writing credit with Luke on the bulk of these new songs. Drawing from a stellar musical bullpen comprised of many supreme session masters too numerous to mention, Steve and C.J. with meticulous craftsmanship structure a fluid musical journey.

Transition is not just a randomly chosen album title. It makes reference to several alterations that Lukather has made in his rock and roll lifestyle. Following some dimly difficult and straining past life events, career obstacles, and musical tribulations, he has reached the life affirming realization stated thusly on the Mascot Records website:

“ ….. ultimately it was time to get it together and embrace things for what they are, because we’ve only got one life to live and we’ve got to make the most of it. “I’ve got a lot to be thankful for, and now is a perfect time for me to take stock of that, which is part of what Transition is about.”

This steadfast purpose has sparked his already keenly creative juices. His consummate eye to detail further fuels his mission to fashion music of remarkable substance.

“Creep Motel” embraces a slow simmering Steely Dan-like vibe, grooving along with a loping blues gait until the pot about boils over near the climax. Lukather’s guitar cuts like a razor-sharp saber and he also delivers one of his strongest vocal performances. All the premium puzzle pieces fall marvelously in place on this track, one of the most forceful songs on Transition.

He downshifts the gears for “Once Again,” a profound pop power ballad that bears a resemblance to his former group TOTO. I say that in part because the touching lyrics are tenderly rendered and serve as the hub of the song. That fact, along with the easy-listening high-sheen production with a catchy chorus, forces the comparison. His record label’s website makes mention of Luke’s vigorously work on developing his vocals, and this labor has paid major dividends. The song features stately piano and a guitar tone that at times is evocative of the tastefully talented Mark Knopfler.

On “Right the Wrong,” another pop treasure, Steve gives his life philosophy that “We’ve got to make it last before it’s gone. We can’t just let it slip away.” It’s a very beautiful song, with his impeccable guitar and world-wise vocal leading the way. Steve co-wrote the song with C.J. and his son Trev. Trev, who himself is a talented guitarist, plays on this song along with Chad Smith (Red Hot Chili Peppers/Chickenfoot) on drums and John Pierce on bass.

The title track “Transition” steers into a jazz-fusion and progressive rock funk-tinged zone that allows these great musicians to display their chops inventively. Amid multiple breaks and sudden changes, mid-song Steve’s emotive guitar soloing firmly takes the reins on this mainly instrumental offering to mingle with divine keyboard flourishes from C.J. Vanston and Steve Weingart. Tal Wilkenfeld (Jeff Beck) and frequent Lukather contributor Gregg Bissonette form an impressive rhythm section well-versed in fusion endeavors. When the vocals do ultimately arrive, they are heavily reverbed and jarringly stand out against the sharply-focused guitar to forge an awe-inspiring musical marriage.

“Last Man Standing” is another fine example of the melodic Lukather/Vanston songwriting prowess with sage lyrics that Luke conveys with brilliant nuance. His guitar phrasing is superb and subtle while the rhythm section consisting of Eric Valentine, Lenny Castro, and John Pierce generate a determined thrust. “Do I Stand Alone” emphasizes a driving rock anthem rhythm, optimistic lyrics, and a potent sing-along chorus. Luke employs a forceful minimalistic and textural style of guitar playing on this one, and his vocals again glisten.

The magnificent “Rest of the World” is a bluesy stirring love song with some of the most appealing guitar contained on an album overflowing with abundant guitar wealth. Fluid slinky runs and blues licks of various shades and hues combine with brawny compelling lead vocals and thoughtful reflective lyrics to create an incredible song with a haunting musical hook. The background vocals add a layer of texture and sophisticated sheen here as they do elsewhere. I also have to make note of the bass work by Nathan East (Eric Clapton, Fourplay) and the drumming of Valentine, who both always seems to know how to best complement a song.

The album closes with “Smile”, the beautiful song written by famous silent era comedic genius Charlie Chaplin and used as an instrumental theme for his 1936 movie Modern Times. Luke’s guitar gently weeps in melancholy glory with eloquent bending notes curving like the windingly sweeping glissandi tones from a singing saw. The song, performed with only lush keyboard accompaniment, held a special place in his late mother’s heart and Luke gives a sincere and earnest heart-felt perceptive performance of remarkable gorgeous depth and dimension. Comparisons to Roy Buchanan (Sweet Dreams), Larry Carlton (Sleepwalk), or Chet Atkins (Why Worry) can give some indication of the nature of this sweet string-bending harmonic quality; in the end, it’s still distinctively Steve Lukather.

Noteworthy enhancements such as including complete song lyrics and track by track musician listings make an impact on the total package presentation. With Transition the legendary guitar icon Steve Lukather has achieved a career pinnacle performance with all songs saturated with tremendous musical textural range and a warmth of rich feeling so often missing from a lot of other contemporary artists.

Transition also yields a gold mine full of guitar nuggets; some offered with restraint, all with authoritative command. These vivid gems are ever present in each song, regardless of style, an intertwining thread holding the album firmly together and giving it an air of immediacy. Refusing to rest on past laurels, Luke has put his nose to the grindstone, strived for perfection, and provided his fans with a rock masterpiece of extreme good taste. This will be one mighty tough act for Steve Lukather to follow. But someone who is so well-regarded that he has a signature series of guitars named after him, who tirelessly works on improving his all-around game, and who is such an illustrious and accomplished well-rounded artist, will most assuredly cherish the opportunity.