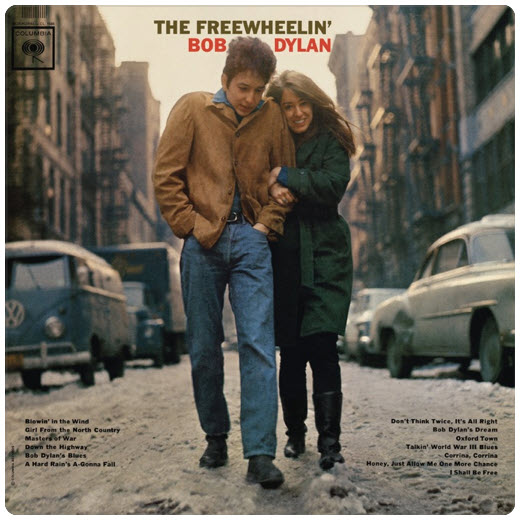 Bob Dylan‘s second album, The Freewheelin’ Bob Dylan, was released almost fifty-six years ago on May 27, 1963. The recording marked an incredible transformation over the tentative self-titled first record from March 1962, which had contained only two original compositions and had sold so poorly (5000 copies) that it became known within Columbia Records as “Hammond’s Folly”. Hammond, of course, was legendary producer John Hammond, who had signed Dylan and who was forced to defend his choice rather vigorously. Dylan was all of 22 years old when he released Freewheelin’. It was a remarkable achievement that calls for continued appreciation.

Dylan initially set his sights on becoming the new Woody Guthrie. He has been quoted as saying about his declared hero: “The songs themselves had the infinite sweep of humanity in them … [He] was the true voice of the American spirit. I said to myself I was going to be Guthrie’s greatest disciple.” However, Dylan’s early days in New York brought him into contact with other notable folk/blues performers such as Dave van Ronk and Rambin’ Jack Elliott, and being the avid student/copyist/self-taught sponge that he was, Dylan soon brought all of these influences and more into his music. He was soon writing protest numbers and socially conscious material with a blues edge that barely contained an outrageous sense of humor.

It must be mentioned that even in his second album Dylan displayed a verbal acuity and a penchant for rhyme that truly invigorated American songwriting. In fact, some of Dylan’s later work is arguably the lyrical foundation for the elaborate rhyming and punning of latter-day rap music. However, none of our current writers ever approach his felicity, facility, and philosophic stretches. Rhyme schemes, song structures, mythological allusions, ? – Dylan is the master.

“I consider myself a poet first and a musician second. I live like a poet and I’ll die like a poet.”

“Unlike most of of the folk songs being written nowadays, this one wasn’t written in Tin Pan Alley. This one was written somewhere down in the United States.”

That second quote is from the spoken intro to “Bob Dylan’s Blues”, and was accompanied by his good-humored harmonica playing and yelps of joy that woke up listeners around the world. Among them were The Beatles, who spoke of wearing out their copy of Freewheelin’ from overplay. It was no coincidence that the writing of Lennon-McCartney took a sharp turn upwards to adulthood after the release of Freewheelin’.

The album contained several gems: “Blowin’ In The Wind”, and “A Hard Rain’s Gonna Fall”, with its mix of 17th century English folk song (“Lord Randall” was its lyrical and structural source) and apocalyptic vision that brought the Cuban Missile Crisis into sharp focus. And the single “Don’t Think Twice, It’s All Right” can rightfully be considered the song that destroyed the conventional pop/love song. This was a song about romantic love gone wrong, a song about relationships that don’t work, and yet in spite of that failure one can walk away with perspective. Goodbye Everly Brothers, goodbye Dion and Roy Orbison and Gene Pitney and everyone else who was singing established fare. This one song still stands, after fifty years, as a model of realism. It’s anti-poetic in stance, conversational in approach, and flawless in execution: the result is more moving than a hundred other love songs. It’s a short walk from this wonderful piece of work to John Lennon’s “Norwegian Wood”.

“Oxford Town” speaks out against the injustice of segregation in the American South. Just 50 years ago, folks, all this was happening: black folks being gunned down, refused the right to vote, told to sit at the back of the bus, turned away from hospitals, told they couldn’t enroll at white universities. While Dylan’s voice was far from the only one articulating the protest movement, no one commandeered the attention of the young middle-class whites in the manner Dylan did. In this he fulfilled his quest of becoming “Woody Guthrie’s greatest disciple”.

The album is also remarkably understated in instrumentation – most tracks are just Dylan with his guitar and harmonica. It’s the model for Springsteen’s Nebraska, but more wholly realized. And for those who keep up their mantra that Dylan just can’t sing, take a listen to “Bob Dylan’s Dream”, particularly where he sings “Ten thousand dollars at the drop of a hat, I’d give it all gladly if our lives could be like that”. He’s singing about the end of his innocence, and it’s a lonesome, mournful, deeply felt cry from the heart. Same goes for “Corinna, Corinna” – the first example of really fine, restrained electric blues guitar, drums, and harmonica in a folk setting.

So much for the continued and willfully blind contention in many quarters that Dylan was nothing but a clever and elusive pretender who never revealed himself. On the contrary, in his records early, middle and late in his career, he has put it all out there, and brilliantly so. But as with all great artists, the many allusions, shades of meaning and clever wordplay in his work serve a greater cause than “moon, June, spoon”.

Freewheelin’ quickly gathered acclaim from all quarters – from high school students to university professors to artists, writers, poets, men of letters, and men and women of deep convictions. The folk music thing had existed in America for a few years, but it had been led by groups like The Kingston Trio and The Highwaymen and others of that ilk: not exactly poseurs but hardly authentic. Dylan’s Freewheelin’ turned everything upside down. Ask Jackson Browne, or Paul McCartney, or Buffy Sainte-Marie, or Gordon Lightfoot or Leonard Cohen, or any of the millions of young men and women who bought a guitar and started writing their own stuff. This album is what they had in mind for themselves: the achievement of having created something original, important and lasting.

Give Freewheelin’ a fresh listen and see if you agree.