Essentials: Wanda Jackson ‘In The Middle of A Heartache’ Album Review 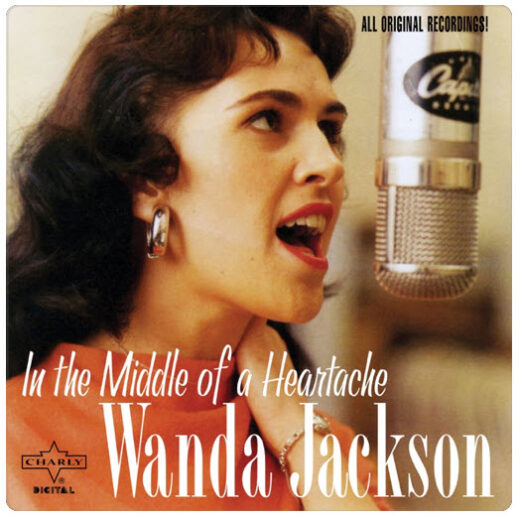 In 2009 Wanda Jackson was inducted into the Rock and Roll Hall of Fame as an Early Influence. She‘s far more than an influence, though: along with the little-known sensation Janis Martin, Wanda Jackson was the female version of Elvis Presley in the mid and late fifties, and had the public and the record industry been ready to acknowledge her true talent, Wanda would have been as big a star as Patsy Cline or Brenda Lee. She was just too damned sexy for her own good, and that worked against her.

She had a deep growl in her voice that was either too erotic or too unfeminine for audiences of the time. She wore tight dresses that showed off her bare arms and beautiful shoulders. The Grand Ole Opry in 1955 was conservative beyond belief and told her to cover up. She did so but never played the Opry again. Sex appeal was strictly verboten, as was the idea of a female singing rock and roll, and Wanda was a very determined young woman who saw nothing wrong with bringing a little sexiness to the stage. Elvis encouraged her, even to the point of spending time with her listening to his wide collection of blues music. She recorded such numbers as ‘Mean Mean Man’ which she wrote herself, and ‘Long Tall Sally’, as well as a brilliant version of ‘Hard Headed Woman’. As a result, country music fans found her too raunchy. She enjoyed mild success with the well-known single “Let‘s Have A Party” in 1960. Quite often on tour she was the sole female performer on the otherwise all-male packages touring around the country.

Over the past decade Wanda has finally been awarded the attention she deserves. She set the stage for such ground-breaking acts as Dolly Parton, and her influence extended as far as Ann and Nancy Wilson of Heart. You see, Wanda is strong, sexy, and confident. You‘ll find her voice an acquired taste, so don‘t expect to love all of her stuff on first listening. It‘s worth the effort, though, particularly if you know some of these songs by other artists, as you probably will.

There are 79 tracks on this collection, more than 3 hours of music, almost all of it superb. A few standout tracks: – “I Gotta Know”, “Hard Headed Woman” and “My Baby Left Me” – the first a stop and start country number that is smokin‘ sultry beyond belief, while the other two are up-tempo numbers Elvis recorded around the same time. Wanda more than does them justice. The killer track, in this avid fan’s humble opinion, is the slow simmering “You Don’t Know Baby” – this alone is worth the legendary price of admission.

None other than Bob Dylan pronounced Wanda Jackson to be “a firecracker” in his Artist‘s Choice album, where he picked “I Gotta Know” as a standout.

Wanda later turned to alcohol and straight country music, no doubt frustrated by the lack of acceptance of her talent for rock and roll. She conquered her addiction to liquor, but fortunately her taste for rock music was revived. When the rockabilly craze hit Europe in the early 1980s her career was resuscitated. She continues to perform today to wide acclaim and the serious interest from Jack White. I can‘t think of another recording artist from the  mid-fifties who can say as much.