The Vivascene Interview with David Jacobs-Strain 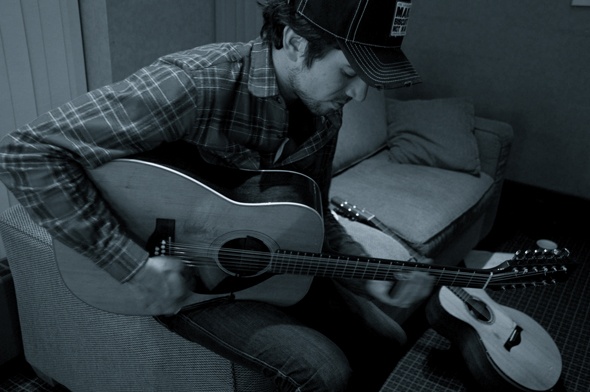 David Jacobs-Strain hails from Oregon and has been playing blues festivals and concert halls since he was a teenager. On November 12, 2010 he opened for Ruthie Foster at the Epcor Centre in Calgary, Alberta, Canada. Following his performance Vivascene had an opportunity to interview this roots/blues guitarist-songwriter extraordinaire.

VS: When we saw you open for Boz Scaggs in June we were reminded of when Lucinda Williams opened for The Cowboy Junkies in Vancouver many years ago. You had a similar effect on the audience in Calgary. They were blown away by your performance.

DJS: Well, thank you. Calgary and Edmonton audiences have been fantastic to me and it looks like I’ll be back here again for a solo show soon. We’re working on it.

VS: Where was your previous show to this one?

DJS: I’ve just come up from a show in Nashville and before that the North Eastern U.S. I’ve had something like 5 days off in the past few months.

VS: You opened for Ruthie Foster tonight. That seems like a great complement to your music.

DJS: Her partner is a friend of mine. She’s a very talented and passionate singer and it’s been great touring with her.

VS: How did you connect with Boz Scaggs?

DJS: I met Boz at his club Slim’s in San Francisco. It was a Barbara Boxer tribute with T-Bone Burnett, Bob Weir and Country Joe McDonald. I got added to the bill at the last minute..After the show Boz came up to me and introduced himself and said “I’d like you to open for me on my next tour.” I’ve done about 60 shows with him so far. It’s given me a lot of exposure.

VS: Tell us about your version of Robert Johnson’s “Come On In My Kitchen.”

DJS: The thing I love about those old country blues is the songwriting. There’s humour and pathos and at the same there’s tongue in cheek. Robert Johnson was great at taking common language and assembling it into a three minute song. Remember he grew up in an era before recorded music where most musicians played at dances. What made him special was the way he was able to condense a story. He wasn’t famous in his day, but he has influenced so many who came later.

VS: What made the early blues so important to you?

DJS: The blues is essentially the music of one man with one guitar and a voice. Don’t forget a lot of this music started in the Great Depression when bands couldn’t afford to travel. Record companies were able to hire a lone blues singer and get the rights to his songs on the cheap. In the early blues you get a sense of movement, of geography and landscape that I don’t hear in urban blues.

VS: Who are your favorite musicians these days?

DJS: I listen to a strange collection of music: Indian classical music, the first albums of Steve Earle, Lucinda Williams, and African music, and a whole lot of my favorite guitarists.

VS: What did you listen to growing up?

DJS: My parents played Bob Dylan, Buddy Holly and the Everly Brothers, who are the best harmony singers ever. And then in high school I I got into world music. I listened to an Indian slide guitar player by the name of V.M. Bhatt who made an album called Saltanah. It was recorded live with a Palestinian oud player. That record had a profound effect on me. I must have listened to that record 500 times. And there was Taj Mahal – he was the guy who made me want to play blues.

VS: Your music is full of these world influences. It’s also very percussive and some of your songs take unusual turns in song construction; your changes in rhythm, direction make your songs very powerful and different.

DJS: My songs are like my taste in food – I’d call it “rustic gourmet” – taking the basic building blocks and doing something different with it to make it my own.

VS: How did you come to record the Stephen Stills song “Treetop Flyer”?

DJS: I’d been wanting to record that song since I was about 15 years old. It’s in my style of playing. It took me a while, though, to feel like I could own that character in the song and make it believable. I feel that performing music is like acting, in the purest sense, not just feeling the character and believing it yourself, but making the audience believe it.

VS: Are you finding any time to write new material?

DJS: In addition to the show I put on, songwriting was what I was doing in Nashville. I was writing with Gary Nicholson who has written songs for BB King, Buddy Guy and Bonnie Raitt. He’s also written a ton of country hits. He’s got the career in Nashville that everyone wants to have; he’s an authentic artist who also gets a lot of his songs cut by other artists. He’s had something like 350 songs recorded. From working with him and on my own I’ve got 15 new songs. I’m hoping to do another record this winter – something more stripped down. I’m making a live record with a harmonica player next month and then I’m going to work on my next studio record.

VS: What else can you tell us about this new album?

VS: We’d love to review it on Vivascene when it comes out.

DJS: That would be cool. Thanks for your support and your thoughtful review of my show with Boz last summer.