Jack Mack ‘Back To The Shack’ Album Review 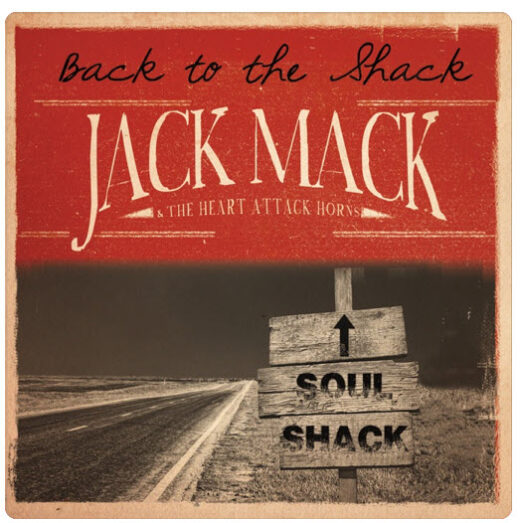 Jack Mack & The Heart Attack Horns have stood the test of time by being active on the Los Angeles music scene for nearly three decades and multiple albums, surviving as legendary performers of Blues, R&B and Soul. Their 2016 release is entitled Back to the Shack and contains nine new originals written by the trio of Andrew Kastner, Bill Bergman and Mark Campbell and one great cover version of a R&B/Soul classic. Kastner has previously written/co-written songs on Gold Records for Aaron Neville, Chaka Kahn, Nicolette Larson, and Barry White. The current band roster consists of Mark Campbell on lead vocals, Tony Braunagel on drums, Andrew Kastner on guitars, Bruce Atkinson on bass guitar, and Carlos Murguia on keyboards. The expressive and unquestionably impressive horn section contains Les Lovitt on trumpet, Bill Bergman on saxophones, and Lee Thornburg on trumpet and trombone.

The earth-shaking opening track, “Standin’ Before The King,” pays tribute to B.B. King, the King of the Blues. Meaningful lyrics abound in telling the story of how a person receives a proper introduction to blues music by hearing a recording of B.B. King. The finely observational unforgettable chorus embraces B.B.’s legacy with chestnuts such as “Sweet as Southern Comfort, deeper than the Mighty Miss, never forget her, just like my first kiss, likely something I knew one thing: I was standing before the King.” Reverent and tasty guitar sparks courtesy of Jack Mack founder Andrew Kastner (performed and/or recorded with Jeffrey Osborne, Peter Wolf, Chaka Kahn, James Brown, The Young Rascals, Steve Stills, Joe Walsh, Robben Ford, Mickey Gilley, Ginger Baker, The Drifters, Billy Preston, Sam Moore and Mick Fleetwood, Jimmy Buffet, and many more legendary performers) propel the song, along with a heepin’ helping of hard-driving brass. Guest Melanie Taylor sizzles in her vocal duet with New Orleans vocalist extraordinaire Mark Campbell.

“Somethin’ In The Water” features illustrious guest keyboardist Mike Finnegan and his swirling B-3 churns and a knowingly powerful grandeur-filled gruff vocal by Campbell on this funky groove laden dance tune. The lyrics tell a tale of the constant State of the Union regarding lying politicians and greedy corporations always running the show (“who’s got the money’s got control”). Such clichés as “some things never change” or “the more things change, the more they stay the same” would certainly apply here as witnessed by me during episodes from my lifetime.

Southside Johnny and the Asbury Jukes, one of my favorite all-time groups would have been proud to record “Don’t Let Her Go.” Dynamite vocal reminiscent of Johnny Lyons, accenting killer punch of horns, firm rocking party-time vibe with perfect rock-steady drums by Tony Brunagel (Bonnie Raitt, Taj Mahal’s Phantom Blues Band, Robert Cray)  and touches of roller-skating rink organ by Mexico City product Carlos Murguia all add up for an ear-catching formula. The saxophone solo of Kansas City sax man Bill Bergman absolutely sends chills up my spine. The lyrics contain nuggets of wisdom such as “a true love is worth its weight in gold, no one knows what the future holds, so don’t let her go.”

“To me there is simply nothing like the expression and power that the majestic Hammond B-3 organ and a 122 Leslie bring to the table for any type of music. I’m proud to say it’s been my keyboard voice and partner in crime for over 40 years.” ~ Carlos Murguia

Some driving Hammond B-3 organ and blistering hot and nasty guitar interplay fuel “Never Too Late.” The highest quality horn arrangement affixes the atmosphere while Bruce Atkinson’s stepping bass guitar and guest Les Falconer on the drum kit hold down the fort with a tight tension-filled rhythm groove. Mark Campbell is masterfully superb in pleading for “someone to rescue me” because “it’s never too late …. too late for love,” and the background vocals provide a bit of additional pizazz.

A solemn gospel/soul feel is presented on the slow swaying blues ballad “Somebody To Trust.” Mark Campbell again excels on his vocal with Muguia’s inspiring Hammond B-3 organ stylishly and heavenly divine as it steers the melody. Lyrics include “it ain’t no lie; it’s a matter of fact, ya gotta find somebody to trust.” Campbell’s passionate sweet-southern accented vocal treatment fits the song like a glove. As per usual on Back to the Shack, the horn arrangement is impeccable.

“I lied, I cheated, now I’m paying the price” are the keystone idea behind “Serves Me Right.” The beginning melody reminds me of “Chain of Fools” but then the organ and the poke salad bayou swamping guitar kick in and take the song to a higher level. “Yeah, I messed up” the character in the song finally admits.

The Heart Attack Horns are especially prominent on the funky “Bad Habit.” The rhythm resides securely snug in the pocket and Mark Campbell’s vocal takes on a perceptively soulful quality that brings to mind James Brown. Rat-a-tat drums, poppin’ bass, and Curtis Mayfield style guitar all funk it up like the south-side shuffle. Fun and funky would be a good description for this one.

“Change My Ways” recalls the intimate rhythm and blues performed by resplendent soul crooner Al Green on Memphis’ Hi Records in the early 1970’s. It’s all there: the sensually yearning, romantic and passionately approached vocal, sensational alluring horns that immediately bring to mind the work of the Memphis Horns, and the steady slow get-to-the-dance-floor beat. Lyrics concern a man who is trying to woo back his former partner with coaxing promises and pleas such as “next time you see me, you’ll be looking at a brand new man.”

A truly stand-out track, “Ain’t No Way,” is the only non-original contained on Back to the Shack. The original version of the song was written by Carolyn Franklin and released by her sister Aretha on the Jerry Wexler produced/Atlantic Records R&B chart topping Lady Soul back in 1967 which also featured the legendary King Curtis on saxophone. That rendering, like this Jack Mack one, is soul-dripping gospel at its very best. Campbell on lead vocal recalls the powerful soulful sound of “The Bishop of Soul” Solomon Burke as he sings the song for all it’s worth. Truly a very moving river deep country-fried buttercream soul fest. Man, what a performance!

The release concludes with a stirring up-tempo gospel-tinged track entitled “Let Me In.” The gospel aspect comes courtesy of the background choir. High energy piano by Murguia summons up the ghost of Jerry Lee Lewis and ringing guitar by Kastner further seals the deal.

When you get to the finish line of Back to the Shack you’ll have been subjected to a supreme and sublime experience of optimal magnetism. Even the album cover is a perfect. It shows an old sign with three wooden boards nailed to a wooden post that points with an arrow to the Soul Shack straight ahead. The Soul Shack itself is an actual location that the members of Jack Mack have frequented since 1980. Back to the Shack’s tremendous writing trio of Andrew Kastner, Mark Campbell, and Bill Bergman swing for the fences and always get a hit on so many absorbing levels.

Loyal fans and newcomers alike will be drawn to the brimming brilliance of Back to the Shack. JM&THAH pay homage to many of the R&B/Soul heroes that provided them with musical inspiration. Among those are James Brown, Maceo Parker, B.B. King, Solomon Burke, Otis Redding, Sam Cooke, Albert King,  Joe Cocker, Marvin Gaye, Wilson Pickett, Johnnie Taylor, and oh so many others. Rarely has a release stirred me like Back to the Shack. This shack is a location that I’ll definitely be spending a lot of time at for the remainder of my days under the sun and moon. Highly recommended music containing a wealth of quality substance situated herein.