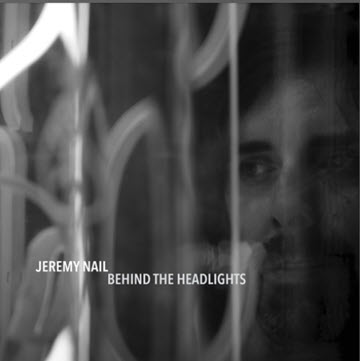 “This record is based on the idea of leaving. Not so much in a physical sense, but leaving behind the version of yourself that no longer serves you.”  ~ Jeremy Nail

Behind The Headlights (Aug. 26), Austin-based artist Jeremy Nail’s fifth album, finds the singer-songwriter grappling with loneliness – not the self-destructive kind, though; instead, the type that leads one to take stock of their life, re-prioritize and begin to have new experiences. The first single, “Crimes of the Heart,” is out now.

“Some people say they’ve lived a life with no regrets, which seems like an impossible standard to me,” he says.

Nail began recording the album socially distanced, in June of 2020, along with co-producer Pat Manske. “I wanted to make something if only to make myself feel better,” he says.

In the almost two decades since his move to Austin, Nail has overcome some well-chronicled setbacks – most notably, a cancer diagnosis in 2012, which eventually led to the amputation of his left leg. The experience was discussed on 2016’s My Mountain, produced by the legendary Alejandro Escovedo, who Nail had planned to tour with before his plans changed. A decade removed from that experience, Nail isn’t interested in talking about cancer anymore; it’s no longer a defining factor in his life.

Behind The Headlights is Nail coming to terms with what it means to be in the here and now, and what it is to move forward; how to learn from your past and create a realistic future for yourself. The album’s center point, “Open Door,” chronicles the idea well: “I wanted a quiet arc to this album given its central lyrical themes,” he says. “I love the idea that silence and solitude bear way to a frame of mind. This is one of my favorite tracks I’ve ever done.”

Even after a short conversation with Nail, it’s obvious that he’s an observer, ready to take in life’s scenery around him and create the subtle kind of on-the-mark observations that can blow you away. Although his music deals with sometimes-difficult subject matter, even a quick listen makes it clear that he’s looking for the silver lining, the bright spot, in all of it.

Behind The Headlights begins with “Man Who Drove Away,” a quiet character study, followed closely by the album’s title track, “Behind the Headlights,” which brings the record into a new sonic territory. The song’s layered production chronicles the idea that connection, the idea of being fully seen without judgment, can help lessen some of our internal struggles.

“Try As I Might,” one of the more poignant tracks on the album, finds Nail coping with the profound loss of his stepdad. “He had a very hard life, and I thought about my own mental health struggles while reflecting on who he was,” he says. “He asked me once to write a song about him and I felt like I could finally do that in a way that felt meaningful.”

Mental health is a cause that’s close to Nail’s heart – he even contributed a cover of Gram Parsons’ “She” to a Friends of SIMS compilation in 2015, benefitting the Austin-based SIMS Foundation, which provides mental health and substance use recovery services and supports for musicians, music industry professionals, and their dependents.

“Silent War,” with its elegant feel, adds a strings section and piano to the album’s acoustic palette, while “Almost Home” is a part two of sorts. “The same characters who find each other and through various stages create a new life for themselves,” he says. “I imagined the guitar parts in this song as if the Cure were from Texas.”

“Something More” brings 1980s new wave to the forefront, with programmed beats and a synthesizer on the track. It’s about the ever-constant reconciliation with changing cities and what it means to feel like a stranger in the place you call home.

“Endless Plain” ends the album with a call to be yourself: “It’s ultimately about finding the courage to be yourself and make your own choices,” Nail says. “The overall statement I want my music to make is simple: that you don’t have to be anything else but you.”