Joe Pernice ~ The Bridge Between Pop and Pain 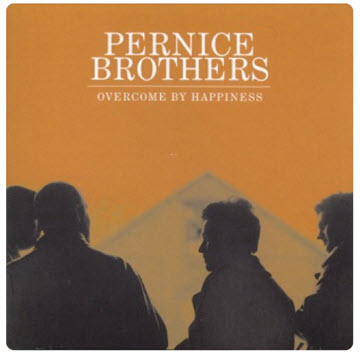 There is nothing better to my ears than a bummer track. Pretty much anything in a minor chord resonates with me. Some more personally than others. Not to suggest I am a mope-head averse to polka or pogoing; I just prefer sad songs.

I was fortunate enough to mature in a renaissance of bummer music: 1991-1999. From the Dirty Three to Vic Chesnutt, American Music Club to Lambchop, the decade offered more than just the cock-rock caws of a murder of crows (Counting, Black and Sheryl), the DIY apathy of grunge, the cloying sounds of MTV Unplugged and wave upon wave of homogenized boy bands/girl groups.

Joe Pernice heralded a wave I like to regard as the Boys of Bummer: ‘ 90s-era American singer-songwriters who eschewed the the histrionics of grunge and the soft underbelly of alt-rock for a low-key moodiness that incorporated the sounds of Jimmy Webb, Nashville, Holland-era Beach Boys, the Bee Gees of Trafalgar, post-punk Nihilism and hung it all, whatever it was, on perfectly structured pop hooks.

Theirs was a music that reveled in misery, that spoke of heroic loneliness, and embraced all that was anti-social. Pernice and the Boys of Bummer wrote of personal politics in a way that was tacit with self-loathing, veering more towards Ian Curtis’s self-fulfilling prophecies than Morrissey’s pop a la Wilde. Taking a page, perhaps unintentionally, from the songbook of John Mellencamp, Pernice and the boys decided never to be pop singers in the classic sense, nor did they aspire for modern pop martyrdom.

Kurt Wagner, of Lambchop fame, has written a Bacharach-trumping catalogue of homespun “new country” avante pop, but his name remains foreign to most households. Vic Chesnut, who enacted his own Ian Curtis denouement back in 2010, will never be the featured artist on Apple Music in the way Taylor Swift and the like are foisted upon that damnable site. American Music Club’s Mark Eitzel, whose deep voice and terse chin perfectly frame his own Bukowski-via-Cohen narratives, can only hope for cult fame in Europe. It is this very lack of star and sex appeal that provides the music with an exclusivity, a tremor of sacred desire, known only to the klatch of fans who continue to marvel at the altar of the Boys.

But if there was one in this group, a group of dynamic artists that stretches back long into the recesses of rock — Hank Williams, Gram Parsons, Chris Bell, Nick Drake, the aforementioned Mr. Curtis, to name but a few– who could be a pop star, and in my globe he is, that would be Joe Pernice. A Scud Mountain Boy, a solo figure, the voice of Chappaquiddick Skyline, the last of the original Pernice Brothers, a Red Sox man, poet, an adopted Torontonian, and author of a 33 1/3 series book about The Smiths. But above all, he remains a true Boy of Bummer. His status in this made-up pantheon of misfits that I admire was set with the very first lyrics of his I heard: “I’m gonna burn the silo when you go.” In a laconic, detached drawl, these opening words to ‘Silo’, a 1995 single by the Scud Mountain Boys, are the nearest rivals to Patti Smith’s equally stunning opening salvo from “Gloria”. Setting the tone for not only the bleak, country noir of the album, “Silo” put Pernice right in my crosshairs.

Already acquainted with Bob Mould, Mark Eitzel and Vic Chesnutt, I had no need of another newer voice for my misery and self-loathing, but dammit if Pernice didn’t charm me. To me, “Silo” wasn’t just another country song, this was a real statement. A new modern standard of song that, were there anything but bad luck and ill fortune in the world, would send “Silo” straight to the Valhalla of Pop.

Thanks to a rave review in The Big Takeover, my faithful companion at this time, I caught wind of Overcome By Happiness, the Brothers’ startling fresh debut. As strong a debut as #1 Record, Murmur and Five Leaves Left, Happiness was everything a classic pop album should be: a flourishing wave of chords, majestic rushes of strings, pregnant and delicate pauses, infectious bombast, tight arrangements and surefooted vocals.

At the heart of this album lay the timeless blues of a radiant and corrosive sense that misery and love are equal components in life. Yin and yang, Joanie and Chachie. For Pernice, this is where inspired poetry and great pop songwriting intersect. The chords scream Tami Show but the lyrics are all Heart of Darkness. Song titles like “Chicken Wire” and “Sick of You” might evoke visions of GG Allin-style mayhem; but the implied nihilism is a more subtle ruse. The songs on Happiness serve as a template that Pernice would adopt as some form of songwriting shorthand: foreboding imagery dished out in a poet’s parlance, wrapped in a cocoon of luscious orchestration, and produced with a warmth and intimacy that makes Neil Diamond sound like OS Mutantes.

Happiness was not only the surprise album of 1999, it was my introduction to an artist who would over the course of the next few years, release a handful of pop-literate, articulate albums, each teetering on the abyss of personal oblivion.

From his early days fronting No Depression-style trio, Scud Mountain Boys, through several solo projects and his flagship band, The Pernice Brothers, Pernice writes about a world that is perpetually in the throws of being messed-up. The people who populate this world could have come from Denis Jonson’s Jesus’ Son, one lover after another. These Pernician misbegotten are never judged, tried or executed. In Pernice’s world, there is little room but for losers, beautiful though they are. His misfit characters are in frequent distress, are lovesick or simply sick. Ian Curtis looms in the shadows of many of Pernice’s songs. And yet, for the morose underbelly of these songs, the inherent pop sensibility of the songs rescues them from doldrums. There is a humour to his writing that balances his albums out; “Van Drunk”, about an alcoholic television star, and “We Love the Stage”, a tale of rock and roll debauchery not unlike the Who’s “Long Live Rock”, show that it isn’t all Oxycontin and deep sleep with Pernice.

Having what might best be described as a melancholic disposition, the music of Pernice has always maintained a key part in my life. The autumn breeze of Happiness helped me through many lonely nights in 1999, while Chappaquiddick Skyline, from 2000, was the perfect tonic for a failed relationship. In these early albums, clear associations with Pernice were made. Much like Zen Arcade or Blood on the Tracks in earlier years, Pernice offers something other than Mouldian catharsis or Dylanesque narratives: a pop sensibility that coats his little dark pills in some sweet, easy-to-swallow coating.

With song titles that read like excerpts from Dear John letters — “Crestfallen”, “Our Time Has Passed”, “Dumb it Down”, and “The End of Faith” — Pernice has never tried to deny his morbid look at the frailties of man for the sake of a hit song. Even the cover material he’s been known to employ –New Order’s “Leave Me Alone” and the Psychedelic Furs’ “Love My Way”–does little to hide this fact: under the umbrella of pop music, songs do not need to be vapid, timid, vacuous, limpid, weak, cloying and annoying. Pop music can express weaknesses, longings and failings. Pop music can be morose; it can be nourished by a songwriter whose preoccupations lie with putting melodies underneath pained verses.

Pernice, not exactly writing Motown or Hi Records material, is following a long line of soul and blues singers; using pain as a counterweight to his gorgeous, nuanced guitar hooks and sparkling pop production. There is a therapeutic and cathartic power in bummer songs; nothing shatters a bleak mood like a Billie Holliday standard or a Bob Mould earth-scorcher. Pernice bridges the distance between pop and pain in a way that is as immediate, hummable, and memorable as “Daydream Believer” without relying on soppy, tear-jerkers. He has also achieved something worth far more than a million units sold; he has built a shamefully underrated catalogue of perfectly bummed-out Pop.

Word by word, verse after verse, Pernice continues to lay it down. To date he has released a trove of bummer tracks but no bum notes. Working with a poet’s discipline and a butcher’s aversion to fat, Pernice regularly outdoes his past output with stunning agility. There are no Robert Pollard-like takes, no filler, no throwaways or patchwork albums. No other Boy of Bummer can share this claim.