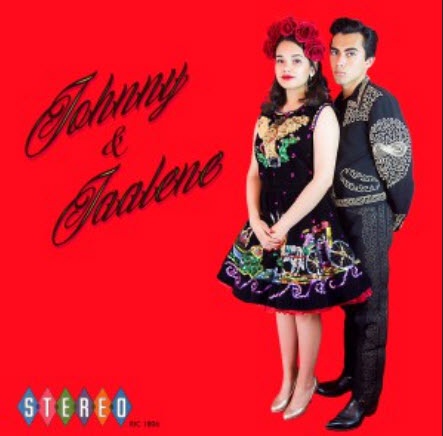 Many times a son or daughter follows in their parent’s occupational footsteps and makes an encouraging impression in their chosen field of endeavor. Johnny Ramos is the son of the great guitarist David “Kid” Ramos, and has elected to pursue the musical dreams that, to a certain degree, mirror those of his famous father. Having Kid Ramos as his dad, Johnny grew up constantly surrounded by a wide plethora of music. Johnny successfully made his studio debut by appearing on his father’s Old School release. Old School, like Johnny & Jaalene , was released on the Rip Cat Records label.

Johnny Ramos plays guitar in addition to being an ultra-fine singer, especially when performing duets with his singing partner Jaalene. Jaalene DeLeon handles her fair share of the lead vocals like a true professional. The duo competently cover a substantial range of material that bridges genres effortlessly and effectively. They show particular proficiency making older songs feel fresh and brand new on this duo’s maiden musical journey.

The release opens with a truly classic song entitled “Baby I Love You.”  The original single was released in November 1963 by The Ronettes. The unforgettable lead vocal by Ronnie Bennett on this song co-written by Phil Spector, Ellie Greenwich, and Jeff Barry made for a timeless song. The twin lead vocal treatment by Johnny and Jaalene serves the song quite well. The song includes a bright driving dual guitar lead. Kid Ramos and Tommy Harkenrider are listed in the credits, but no mention is made as to on which of the selections they appear. The rhythm section consists of Brent Harding (from the group Social Distortion) on bass guitar and Kip Dabbs on drums.

“To be Chicano means to be proud of being Mexican, as well as to be proud of being American. That’s who I am. Chicano rock is music that combines these two worlds. Lalo Guerrero is what inspires me, because he wrote music about being accused by his hermanos for losing touch with Mexican heritage; but being American doesn’t mean you have to forget who you are and what you come from. Roots music is raw unchained American creativity. It’s organic, and simple and very passionate.” ~ Johnny Ramos

“Gee Whiz” is a song written by Carla Thomas (daughter of Memphis legend Rufus Thomas) when she was only sixteen years old. It was recorded in 1960 when she was seventeen. The song succeeded gratifyingly as it achieved the accomplishment of reaching the American Pop Chart Top Ten. Jaalene possesses the same youth-filled innocence that Carla had, singing with a charming glow that shines a legitimate light. Similar to a slew of the songs on the release it is short in length; nevertheless simply gorgeous.

Later on the release, Jaalene sings “Angel Baby” with a sparkling buoyancy that is exquisitely adorable. If this one doesn’t make you want to hug and squeeze while kissing and canoodling with your sweetheart, then you better check yourself because most likely rigor mortis has begun to set in. It will be a perfect song to get patrons on the dance floor for a slow-dance when Johnny and Jaalene perform it live. Jaalene hits a grand slam home run with this one!

Eddie Cochrane’s “Teenage Cutie” is given a treatment that falls somewhere between Cochrane’s and Link Wray’s versions of the tune. Close your eyes and you’re transported back more than a half century in time when rockabilly was ragin’ wild. Johnny’s vocal is greasy goodness I tell ya, and the guitar break is fine as gourmet cuisine.

“Let It Be Me,” probably best known as a 1960 top-ten hit by the Everly Brothers, is beautifully rhapsodized by Jaalene. Ms. DeLeon uses a different, full of sass vocal treatment on “Good Looking” that also works quite well. The retro guitar work is complementary on the track also.

“Los Chucos Suaves,” penned by Ry Cooder and made classic by Lalo Guerrero is sung to perfection by Johnny. As per the above quote by Johnny, he considers Lalo Guerrero one of his major influences. The accordion work is sweet and Johnny’s Spanish vocal is full of confident swagger. The lyrics harken back to the days when partner dancing was a hugely popular form of social recreation for young people. The song mentions many of the popular dances of that time, such as Cab Calloway’s song “The Jitterbug.” which almost immediately after being written birthed a new dance craze.

The Jitterbug traced its roots to nightclubs in Harlem, while the Mambo was rooted to La Tropicana night club in Cuba. Cross pollination of Swing dances resulted. African Americans inventing such Swing crazes as “The Shag” and “The Lindy Hop.” Similarly, Latinos began to combine and recreate the Cuban Mambo and Rumba into what we know today as Salsa and Cha-Cha-Cha. This song is a great example of that mishmash, .

The late great Doug Sahm was a bit of a musical chameleon and his “Why Why Why” is one from his time as a blues-tinged artist. Johnny captures the begging and pleading of a lover who intensely craves the attention of his paramour. Puro Chicanismo at its finest glory is found in Johnny’s accomplished vocal. In my opinion, this is one of Johnny’s greatest vocals. The saxophone work of Ron Dziubla, along with the accordion and guitar play create a perfect atmosphere.

The Queen of Rockabilly (Wanda Jackson) is paid tribute on the release with “Let’s Have A Party.” To say the version here is better than Wanda’s could be considered sacrilege; but give a listen to it and see if you don’t agree. Jaalene’s vocal is soooo much sweeter. It takes some confidence to sing lyrics such as “I never kissed a bear, I never kissed a goon, but I can shake a chicken in the middle of the room.”  These kids have teener cojones, and I voice that as a compliment. Jaalene fully embraces the lead vocal and the retro dirty rock licks featured on this song are inspired. Think Chuck Berry “Roll Over Beethoven” and you’ll get what I’m trying to convey. And when Jaalene sings “ooh” it is guaranteed to buckle your knees.

“Please Give Me Something” has a rockabilly feel with echo-laden vocals and some mighty fine guitar. Pounding drums and enough guitar grit are supplied in this tune guaranteed to get people off their rear ends and onto the dance floor when it is played live.

“The accordion played on the album reminds me of my Grandpa, because he loved music that involved the accordion. That’s what my grandparents used to listen to and that is why roots music is important to me.” ~ Jaalene DeLeon

Jaalene gives a masterful rendition on “Cuando Caliente,” a short song, but one that is as potently sweet as a lover’s kiss. She sings predominately in Spanish, but does a verse in English that is chilling, especially when Johnny joins in on harmony vocal.

The final cut, “One Summer Night” is probably my favorite song on the disc. Johnny and Jaalene trade lead vocals on yet another retro tune from the late 1950s. The treatment here has a more driving rhythm than the original doo-wop song. The brilliant accordion mastery of Jesses Cuevas consolidates the rocking good time feel. The song is a true treat on this fun-filled debut that shows these two youngsters are old souls who are filled to their brims with talent; and in my opinion, great musical tastes. Bravo!

“I think inside every song there are other songs. But I also think, inside your voice, there are other voices that you have yet to discover and that’s kind of why you are here.”  ~ Tom Waits