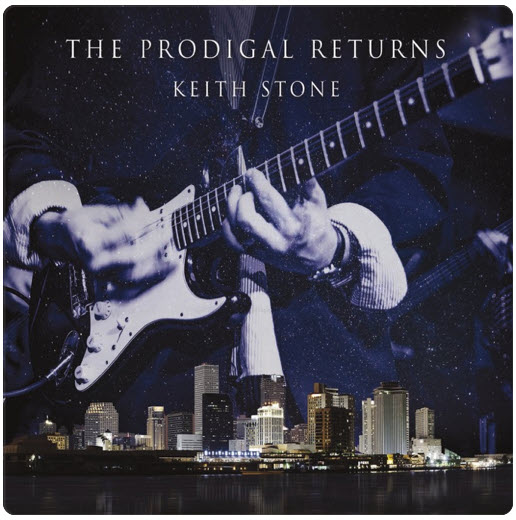 Keith Stone is a native son of New Orleans, Louisiana, a city steeped in a rich American musical heritage.  Stone, a staggeringly gifted guitarist, singer and songwriter pays tribute to the Crescent City on his new release entitled The Prodigal Returns. Stone has created a wholly enjoyable album having written eight new compositions that embrace the diversity his birthplace is famous for. The abundantly impressive supportive group of musicians who join him on his bluesy journey help contribute plenty of mystical mojo to the potent mix.

David Hyde, who grew up in Hammond, Louisiana, bestows beneficial bass guitar throughout the release. David Hyde is also credited with penning one of the albums key tracks, the instrumental “Buster’s Place.”  Hyde is the skilled producer of The Prodigal Returns; in addition to writing and arranging all the album’s wonderful horn parts. Nelson Blanchard, another multi-talented Louisiana native and Louisiana Music Hall of Famer is credited with drums, percussion, various keyboards, and background vocals.

The aural journey begins with a brief ninety second instrumental prelude that places the listener squarely in the heart of the French Quarter. The first proper song is “Better Things to Do,” which contains prudent and richly descriptive lyrics concerning resisting the wily temptations of a flirtatious female. The song, sung quite confidently by Stone, features a bouncy R&B flavored melody.  Keith Stone also delivers some judiciously placed bitingly bluesy guitar licks that soar. The horn section comprised of Lacy Blackledge on trumpet and Mike Broussard on tenor and baritone saxophones is sublimely savory.

An exquisite medium-slow blues number entitled “First Love” contains some of Keith Stone’s most satisfying wistful and soulful singing. Plenty of Stone’s sizzling and dynamic guitar work is on exhibit; slightly reminiscent of the formidable and tasteful fills of legendary fretboard masters Johnny “Clyde” Copeland and Albert “Iceman” Collins, with some of B.B. King’s vibrato and string bending skill. Nelson Blanchard imparts incessant piano tinkles while Blackledge and Broussard again adeptly blow their horns to further vivify the substance to this killer track.

Keith Stone’s earnest homage to his loving wife “Cindi Leigh” features two special NOLA guest artists. Bruce “Sunpie” Barnes adds authentic Louisiana accordion flavor to the song. When combined with the frottoir (chest rubboard) expertise of Andy J. Forest, the song takes on a definite goodtime Creole quality. Keith Stone sings with undeniable passion and his guitar literally jumps with joy. Lyrics such as “she’s smart as a tack/smooth like butter/when she pulls me close/man, I start to stutter” strike the lovesick nail squarely on the head.  Blanchard fuels the song with rolling tom-tom percussion and Hyde’s stepping bass is prominent in the frisky mix.

“Take Me Home” is an autobiographical song in which Stone bares his longing to return to his home town where music is in the air and the mighty river flows. Lyrics that proclaim proudly “I was born in the heart of the Crescent City/cool of the night on the banks of the Mississippi/I cut my teeth on The Meters and Dr. John/sitting on the levee with my radio playin’ those funky songs.” The horn charts fit the song snug as a bug in a rug. Keith’s guitar has a vintage Stax Records touch and his vocal is sincere as he repeatedly pleads the refrain of “Take Me Home.”

My favorite song on the release is a luscious slow dance number entitled “New Orleans Moonlight.” Stone’s vocal is simply superb and his mid-song guitar solo is a thing of heart-felt beauty. Elaine Foster is very striking on her background vocal and the baritone sax play of Mike Broussard is delightfully smooth.  The picturesque lyrics are so vivid that you can close your eyes and picture sitting and canoodling with your sweetheart beneath the warm summer moonlight.

“New Orleans Moonlight is one of my favorites. I wrote it because I love New Orleans and the city is so beautiful in the moonlight. It’s the kind of song that was waiting to be written — a little old school with Guitar Slim, Wayne Bennett, and B.B. King overtones.” ~ Keith Stone

The Louisiana R&B/Funk of The Meters is present on “Time to Move On.” Ever-pertinent blues lyrics relate the struggles faced when having a job with meager wages compounded by the big bossman who treats you like a dog.  Stone’s rhythm guitar is super-funky while his lead guitar rings with a fury.  The brass section of Blackledge and Broussard are supplemented by guest Bobby Henderson on alto sax and together they punch like professional boxers.

Stone’s guitar displays an early rock and roll shimmer and Bobby Henderson mans a mean honkin’ tenor sax on “Make Me Feel Alright.”  Blanchard’s rat-a-tat drum work and Hyde’s hard strutting bass lay a solid foundation for Keith to elevate from on this up-tempo romp. As for the lyrical content; I’ll give you three guesses what it is that makes him fell alright.

“Buster’s Place,” an infectious instrumental, allows the entire ensemble to stretch out and prowl like stalking tigers.  Keith’s restrained jazz/blues guitar sketching cuts razor sharp as he peels off notes that sting with the ferocity of a maddened mud dauber.  Blackledge’s trumpet gets a chance to take center stage before re-teaming with Broussard’s saxes to pin down the melody. Blanchard keeps time with his drum sticks striking the drum rim while Hyde’s bass flexes a muscular chest.

The title track “The Prodigal Returns” is blues/funk with Stone’s rhythm guitar recalling Curtis Mayfield’s “Superfly,” or other catchy songs from that era.  Stone’s lead guitar is heavily laced with sinuous effects pedal action and his vocal is strong and supple. Elaine Foster provides excellent harmony on her backing vocal.  The gutsy saxophone play of Henderson and Broussard add sheets of aural color to the melody.

The album closes with an extra-special guest appearance on piano by Dr. John (Mac Rebennack) on “Just a Closer Walk with Thee.” It is a gospel song that has been a mainstay of Dr. John’s repertoire for decades. It’s also one of the hymns that comes to mind when you think of a traditional dirge for a New Orleans jazz funeral procession. Keith’s guitar is regal and heavenly beautiful with a glowing luminance. Stone masterfully takes the reverent lead vocal duty with his southern accent a bit more pronounced than elsewhere. Elaine Foster’s refrains of “closer walk” add genuine church-like authenticity while Joe Krown is simply perfect on the Hammond B-3 organ. The impressive brass section is comprised of Tim Stambaugh on sousaphone, Kevin Clark on trumpet, David Phy on trombone and Cale Pellick on alto saxophone.

Every cut on The Prodigal Returns is solid and the high level of musicianship is clearly evident. Keith Stone’s guitar work shines with licks that show the touch of a musician whose heart and soul is intimately infused in his music. The arrangements and songs are thoughtfully varied, filled with a sense of passion and purpose on each and every note.  The production by David Hyde is executed impeccably. The Prodigal Returns has got the spirit, the feeling, and it totally delivers the goods.