Listen to some Sinatra 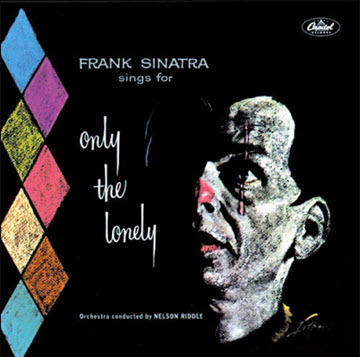 I have a friend who is usually either deliriously in love or desperately heartbroken. Everyone has a pattern, and that is his. When he’s on the downward spiral, I try to help, though I know that relationship advice is generally useless–it’s the most eagerly sought-after and most quickly discarded advice there is. The last time his heart was stepped on, I had only this to say: “Listen to some Sinatra.”

Once, I would have recommended “Unsatisfied” by The Replacements or some bitter little ditty from the first few Elvis Costello albums. But that kind of music has lost its ability to comfort. Now, when my heart is shattered, I want to be reminded that the world is not, in fact, coming to an end as well.

I could have been more specific with my friend, and said “listen to a couple of Sinatra’s Capitol albums.” The earlier Sinatra–the “boy singer” of the Tommy Dorsey band and the crooner of the Columbia years–possessed a voice of almost supernatural magnificence, a tone so pure that it boggles the mind. This is a period that deserves repeated listening, but it’s not the most helpful for my friend’s predicament.

By the time he started recording for Capitol, Frank Sinatra’s voice was a little rougher, his range more limited. The effect was to bring him down to earth. The idealized love songs of his bobby-soxer years gave way to the mature reflections of a man in his prime. All the passion was still there, but the performances were tempered with self-mockery and humor. Listen to the intro verse of “Glad To Be Unhappy,” from 1955’s In The Wee Small Hours, which includes the line:

“Since you took it right on the chin / You have lost that bright, toothpaste grin.”

This is corny, but it’s also pretty reassuring, especially as Sinatra delivers it. “Toothpaste grin” is such a lovely way to evoke the happy obliviousness of new love. If your feelings are about as deep as a toothpaste commercial, maybe it’s not so bad that things have gone south.

Sinatra didn’t write these lyrics: he seldom composed the songs he sang (with the notable exception of the anguished “I’m A Fool To Want You,” which he wrote for Ava Gardner). Nor was he the only singer to perform this song—you can easily find dozens of other versions. But even the good ones—like Billie Holiday’s late-career recording—seem like completely different compositions. Like an actor, Sinatra imbued other people’s words with life, and he was so good at it, he effectively turned whatever he sang into his own song.

Sinatra’s Capitol albums generally alternated between two moods: the brash swagger of new love and the muted tristesse of romantic defeat. Think the infectious joy of Songs For Swingin’ Lovers! and the black melancholy of …Only The Lonely, the nearly out-of-control exuberance of ”I Got You Under My Skin” and the nearly cosmic despair of “Angel Eyes.”

This is why the Sinatra of the Capitol years is perfect for my friend. Few rock-era artists achieved the truly adult view of love that Sinatra mastered back in the ‘50s. In lesser hands, a song like Harold Arlen and Johnny Mercer’s “One For My Baby” might seem like dated schmaltz, the crap that the Beatles and the Stones supposedly banished for good back in ’64. But as performed by Sinatra, it trumps just about any love song either of those bands has done. The Beatles certainly never grew up enough to reach this level of maturity—even their greatest ballads are essentially boyish. Maybe the Stones got there once, with “Wild Horses.”

Most rock and pop songs are about wanting: wanting sex, wanting love, wanting money, respect and satisfaction. At its best, Sinatra’s music is about gracefully accepting that you’re not going to get what you want. Sometimes you have to swing your jacket over your shoulder, finish that last drink, and head back out into the night.