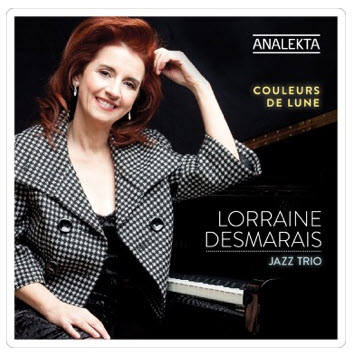 The jazz trio is one of the most satisfying musical experiences ever devised: think of what the Oscar Peterson Trio accomplished, as well the Bill Evans Trio and the Nat King Cole Trio. The trio formation ruthlessly exposes any weakness in either the material or the performers or while offering up diverse opportunities for solo as well as duet and ensemble playing. Each musician is called upon to do so much more than provide showmanship, yet can’t afford to slink into the background. This line of thought pervades much more than jazz: it applies equally to chamber music and rock: The Beaux Arts Trio and Gryphon Trio headline the top chamber music groups, while in rock the achievements of Cream and The Police are legendary.

It’s more than time to add another name to that list of great musical trios, specifically the Lorraine Desmarais Trio. With their 2012 (their eleventh) album Couleurs de Lune they provided both superb musicianship and material that absolutely sparkles with musical inventiveness, accessibility and non-stop listener appeal. You don’t need to be a hard-core jazz fan to appreciate their talent, but make no mistake: this is not MOR fare either.

Lorraine Desmarais is a prolific composer, teacher and performer based in Montreal, long known as one of the most exciting jazz environments in the world, and home, of course, to the late great Oscar Peterson, one of Lorraine’s prime influences. She also pays homage to the work of Chick Corea, and has that same lyrical line and fluidity of tone characteristic of Corea.

Desmarais has recorded many albums as a solo performer and musical director, including several with well-known artists such as Michel Cusson and Michel Donato (Vision), Tiger Okoshi (Lorraine Desmarais), Don Alias (Andiamo), André Moisan, Jean Gaudreault and Ted Baskin from the Montreal Symphony Orchestra and Michel Bettez from the Orchestre Métropolitain (Bleu Silence), in addition to her long-standing team (and Trio members) of Frédéric Alarie (double bass) and Camil Bélisle (drums).

She has been teaching in colleges and universities since 1985, and is a jazz piano professor at the Cégep Saint-Laurent in Montreal.

Couleurs de Lune opens with the title track, and it is a subtle masterpiece of ensemble playing, with some scintillating piano work by Lorraine, and the absolutely stunning double bass work of Frédéric. He’s an elegant and hard-driving virtuoso who has played with Oliver Jones, Charles Aznavour and Michel Legrand and here he complements the lyrical melody line with flair and precision. Lorraine had this to say about her intentions with this piece and how it frames the album:

“Beyond the sea and mountains shines the moon… Throughout my writing of the pieces on the itinerary of this musical voyage, the moon was ever my confidante. At times a romantic moon, she evoked Latin influences ; at other times a full moon, her luminous energy flooded me with jazzy moonbeam; and in the calm and quiet of her moon dust sprinkling down, some rather unheard of harmonies were born under my fingers.

I can’t promise you the moon, but I hope that as you listen to the jazz and Latin moods of this recording, she will inspire you and fulfill your wildest musical dreams..” – Lorraine Desmarais, from the liner lines of the accompanying digital booklet.

The following tune, “Forever Young” has absolutely nothing to do with the Bob Dylan tune of the same name, highlighting as it does the skilled interplay between piano and Camil’s work on the drums. He’s a gifted drummer and displays some terrific stick work in the background here, but when given the forefront delivers some of the most satisfying non-showy percussion heard on any jazz album in recent years.

Other key tracks include the joyous “Week-end à Toulouse”, the ravishing beauty of “Bolero”, the sparkling flourishes and repeated climaxes in “Largo”, and the truly moving re-invention of the old chestnut “Danny Boy”. It’s not easy to make something new of such a familiar piece, but the trio’s version of “Danny Boy’ not only sheds new light on the possibilities of the melody, but manages to make most other renditions nothing more than a trivial outline. It’s a superlative conclusion to a marvellous album.

One final note for audiophiles: the recording quality of this album makes it sonically a MustHave album. Kudos to the sound engineers!