Mick Kolassa & Mark Telesca ‘You Can’t Do That!’ Album Review 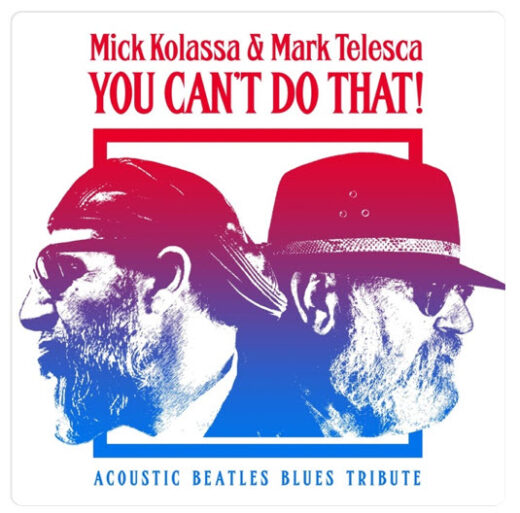 The songs of The Beatles have been covered by more artists of all musical genres than any songwriters, with the possible exception of Bob Dylan. Those covers, as can be expected, have been completed with various levels of success. Most of those recording artists over the years confined their tributes to single songs. Joe Cocker, for example, always seemed to excel on his Beatles covers. Cocker regularly even surpassed their masterful efforts (“She Came In Through the Bathroom Window” or “A Little Help From My Friends”), and sometimes came up a smidgen short (“Something”). Some groups did credible work over the course of entire LPs. R&B superstars  Booker T & The MG’s (McLemore Drive), country gentleman Chet Atkins (Chet Picks The Beatles), and jazz icon George Benson (The Other Side Of Abbey Road) all are testaments to the breadth of an artist’s creative power and bold artistic ambition.

The bluesy arrangements found on this 2017 release by Mick Kolassa & Mark Telesca entitled You Can’t Do That! are also a fine musical presentation of eleven classics from The Fab Four’s catalog that stands smartly alongside the above three examples.

“The song selection process for this was tough – we purposely avoided any songs that were overtly blues already, such as “Oh Darling” or “Come Together”. But we needed songs with arrangements that would lend themselves to blues. That’s why songs like “Something” or “Here Comes the Sun” weren’t included. I do hope that Mark and I can get together for another album, maybe casting a slightly wider net beyond the Beatles.” ~ Mick Kolassa

This experiment of acoustical artistry is the coupling of the contrasting singing talents of Mick Kolassa and Mark Telesca, and the pairs escorting sterling acoustic guitar play is co-mingled with the guitar playing of Jeff Jensen. Jensen also serves as the album’s producer, a capacity he has filled on a few previous projects of Mick Kolassa. Jenson expertly brings out plenty of subtle nuances of the acoustic guitar execution on You Can’t Do That.

Mark Telesca also augments the proceedings with his bass guitar play. A pair of Memphis-based musicians; James Cunningham on the majority of drumming and percussion, and Marc Franklin are further key additions. Franklin is featured on two songs; playing trumpet on “I’ll Cry Instead” and flugelhorn on “She’s A Woman.”  The talents of yet another Memphis musician, Tommy Boroughs, are utilized on “Lady Madonna” (fiddle), and “She Came In Through the Bathroom Window” (mandolin).

Kolassa applies a raspy world-wise growl that gives the impression it originates from the template of Louis “Satchmo” Armstrong. That voice, coupled with the muted trumpet of Marc Franklin, gives an approximated sense of N’awlins to the opening song, John Lennon’s “I’ll Cry Instead” (another song covered very nicely by Joe Cocker). The bubbling up arrangement provided here belies the song’s dire lyrics.

“Can’t Buy Me Love” takes on a much darker hue than The Beatles could ever have imagined. The swirling acoustic guitars dance a devilish fencing duel giving it a similar aura to the one achieved by the Rolling Stones on their classic “Paint It Black.”  I bet Sir Paul McCartney would appreciate the tumult and dramatic tension on his early song accomplished here by Kolassa and Telesca.  Mark’s vocal is as wickedly satanic and ominous as an excursion down an unlit midnight alley.

Driven by a slow bluesy beat the early Beatles track, “I Feel Fine” takes on a new flight plan with noticeably suspenseful bass lines. Bluesy harmonica licks are kneaded into the mix courtesy of Eric Hughes. The song chugs along with the rhythm of a steam engine steadily running down the mainline of the Kansas City Southern between K.C. and Port Arthur.

One of my favorite tracks on the release is the sorrow filled reworking of “Fixing a Hole.”  The combination of Telesca’s vocals and his stylistic acoustic guitar lead really hits home hard. Both undertakings are performed in a fine as wine style that reminds me of the tones evoked by the fingers and vocal chords of Jorma Kaukonen. The sound of sweet clear guitar picking is captured as beautifully as a peacock opening her tail feathers in dance.

The title track, “You Can’t Do That,” has the unrushed feel of a back porch gathering. The old-time country-blues slide guitar weeps and the morsels of harmonica are well placed. Dissimilar to the stated lyric; this song doesn’t “let you down and leave you flat.”

“Lady Madonna” is given a slowed down somber treatment, much in the manner that Eric Clapton remade his “Layla” for the Unplugged session. This handling grants a heightened awareness to the lyrics. The drums are craftfully carried in a funeral procession manner and the bass work by Mark Telesca fits just right. The violin of Tommy Boroughs is plucked and played with simplistic and elegant mastery, sobbing and quavering to accomplish a truly saddening effect on the song.

“Mean Mr. Mustard” is another winner with Kolassa spitting out the lyrics in a gravely manner reminiscent of Screaming Lord Sutch. “Such a dirty old man!” and “Lord, he’s a dirty old man” are right up his vocal alley. When the song segues into “Polythene Pam” the pace slows and the acoustic guitars are simply magnificent giving the song a stealthy cat stride. Mark takes over the vocal, and the contrast is appealing, to say the least.

The release’s finale comes with a neo-bluegrass arrangement of “She Came In Through the Bathroom Window” that takes me back home to those curvy crooked country roads of West Virginia, where every father’s son is a guitar picker. There is no banjo or fiddle in the gathering, but Tommy Boroughs does his best Sam Bush tribute on the mandolin, with his contributing lead at the break being a true eight-string appetizing display of cheerfulness. Kolassa and Telesca transfigure this tune in a much different direction than Joe Cocker did, but I also like the result achieved here.

“From the time I was small, both my parents would teach me their favorite songs, and my older sister was into Rock and Roll at the time, so, music was always around me; always a big part of me. I can’t remember not being interested in music, so it was just natural. Although nobody in my family was a musician, picking up an instrument and messing around with it seemed a natural thing to do.” ~ Mick Kolassa

Being a life-long Beatles fan, and being old enough to live through their musical rein, I downright enjoyed all the songs transformed on this release. Hearing this album made it a requisite that I immediately watch Anthology again.  A minor quibble would be no inclusion of George Harrison compositions, or tunes that had Ringo on vocals, but that is a most minor quibble. When the pair does their follow-up (and see that I said when, not if) I would request they include the song “Michelle”, a song that I’ve always loved performed with acoustic guitars.