Music Essentials: The Top 10 Classical Albums Every Music Fan Should Own 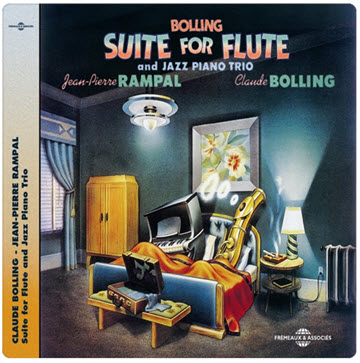 Whether you’re a classical connoisseur or a musical neophyte desiring to learn more about great recordings, here are ten albums that belong in every music fan’s library.

Deciding not to be bound by strict interpretations of the word “classical”, we looked for scintillating performances by outstanding artists working primarily in the classical tradition whose recordings continue to satisfy and inspire us.

Some traditional, some crossover, some contemporary, some opera: a bit of everything is what we’ve assembled. We hope you enjoy and we welcome your comments below. What would you put on your own list of Classical Albums everyone should own?

Duets with the Spanish Guitar is widely considered to be the first classical crossover record for its superlative union of Spanish guitar (Almeida), classical flute (Martin Ruderman), and the vocal beauty of Salli Terri, a famed mezzo soprano with a haunting voice of intoxicating velvet.

The album includes the one of the most beautiful pieces of music ever composed: “Bachianas Brasilieras No. 5 – Aria”, by the South American composer Heitor Villa-Lobos, who pronounced this rendition “the best recorded performance of this work.” Other highlights include selections by Chopin, Ravel, Tchaikovsky and Falla.

Don’t worry, we’ll get to more serious stuff in a moment. Claude Bolling was a noted film composer with a strong jazz sensibility. Rampal was a player in the classical French flute mode, and was a noted soloist who almost single-handedly restored the instrument to a popularity not seen since the 18th century.

The Suite for Flute and Jazz Piano went to the top of the US Billboard charts and remained there for ten years.

The album may sound on first listen like cocktail music, but sometimes what glitters truly is gold, resulting in a happy marriage between popularity and excellence. Such is the case here.

The greatest soprano of the 20th century, bar none. The set opens with her incomparable rendition of “Un bel di vedremo” from Puccini’s Madama Butterfly and concludes with Pucccini’s “Love Duet” from Manon Lescaut. In between you will hear selections from Verdi, Donizetti, Bizet, Berlioz, Mozart and more.

Yes, we’re in love with Maria Callas. She was a spine-tingling and electrifying performer who managed to to deliver the goods in the studio as well.

A hundred years from now music fans will still be listening to Callas. This recording will tell you why.

The legendary first 1955 recording launched Gould’s international career, but was thought by many to be a little quick.

His second recording, done much later when Gould had long since given up public performance to concentrate solely on the studio, is sparkling with contrapuntal clarity. Gould revered Bach above all other composers, and despite his many mannerisms (which some cannot bear, it must be said) he brought an amazing musical intelligence to everything he did. And as the Goldberg Variations themselves, they are marvelous inventions that clear the mind and restore the soul. A desert island disc if ever there were one.

And yes, Gould was known for thousands of splices in his recordings. Don’t let that affect any evaluation of his mastery of the instrument.

This recording dates from the mid 1980s when under Solti’s direction the Chicago Symphony was the equal of any in the world. Those who are acquainted only with the famous Adagietto from this symphony owe it to themselves to hear the entire work: it is dark, sombre yet optimistic. Like all of Mahler’s work, the symphony explores man’s triumph over death and despair.

Famously used at JFK’s funeral, and also in the classic Luchio Visconti film Death in Venice the Adagietto may remind some of Samuel Barber’s more recent Adagio, but for this listener Mahler’s composition reigns supreme.

Recorded in 2005 by one of the finest string quartets ever assembled, this record belongs in every library, particularly in those of whom are not enamoured of the Symphonies. For late night listening, when one has wearied of the world and could use a brandy and some philosophy, delve into this spirited playing of some of the deepest, most rewarding music ever composed. The ensemble’s wizardry is not only beyond reproach, it is a revelation of how four brilliant minds unite with brilliant technique. If one can own only one version of the Late Quartets,  we highly recommend this release.

The superlative piano of Menahem Pressler, the violin of Isidore Cohen, and the violincello of Bernard Greenhouse, with Bruno Giuranna on viola make this recording an absolute joy. The delicate beauty of these compositions render one uncomprehending as to why Mozart was perceived in his lifetime as a man who wrote exceptionally difficult music. Difficult to play perhaps, but not to enjoy.

The Beaux Arts Trio was formed in 1955 and survived in various lineups until 2008. Pressler is the consummate Mozart interpreter, with exceptional keyboard facility and felicity: the two qualities are displayed with great vitality here.

Contemporary violin compositions by Grammy award winner, the Estonian composer Arvo Pärt: this is the music that introduced him to the Western world. “Tabula Rasa” (with Alfred Schnittke, piano) itself dates back to 1977, while this recording was issued in 1984. This is an album of ineffable beauty and astonishing luminosity suffused with religious feeling. The surprising combination of Kremer and Jarrett on “Fratres” is unforgettable. And as for the sonics, this ECM recording is a marvel.

Pärt has been the most performed contemporary composer in the world for three years for several decades. This is minimalist music for the 21st century, and for the 31st.

The opera singer for those who don’t think they like opera. And Donizetti is the opera composer for those who think opera is boring. Gaetano Donizetti was born into a non-musical family in Italy in 1797 (dying insane in 1848) and became the foremost composer of bel canto opera in the world, as well as the most prolific.

As for Pavarotti, he was the very model of an operatic tenor: outsized, grandiose, passionate and dramatic. His enunciation wasn’t always the best, but he, and he alone, was the King of the High Cs in the 20th century. Pavarotti was inexhaustible, and he is at his best singing Donizetti.

Not only Gershwin’s finest work, but one of the great operas of all time. It’s a tear-jerker, and never better played or recorded than this version from the mid ’80s. Simon Rattle’s conducting is a marvel, and Willard White’s performance is a wonder to behold. Simply beautiful, wholly engaging.