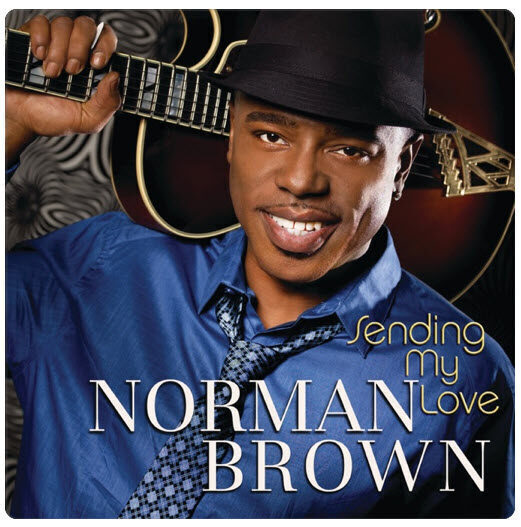 Norman Brown is an accomplished musician that shows high-quality consistency in all of his recording endeavors. He is also a show-stopping live performer showing charisma and skill as I can attest to after witnessing him in concert by himself, or with other giants such as Paul Taylor, or Gerald Albright. My most beloved album of his work is Sending My Love, although all of his albums are top-flight efforts.  The title, Sending My Love, fits like a glove on this splendidly captivating contemporary jazz release on Peak Records & Concord Music Group. Although Norman Brown is indeed most prominently a superlative guitarist, he also expertly excels at songwriting and from time to time bestows his urban rooted silky-smooth vocals to provide spice and variation to his music.

Norman Brown is not a novice when it comes to making pleasing smooth contemporary jazz recordings saturated with rhythm and blues. His recording career dates back to 1992, and in 2003 he garnered the Grammy Award for Best Pop Instrumental Album for his 2002 release Chillin’. That significant triumph entailed the conquest of fellow distinguished nominated artists Boney James, Kirk Whalum, Kenny G, and John Tesh. Sending My Love is Brown’s 8th solo recording, and he magnificently crafted another prized gem with profound passion, emotion, and love sent out in each note.

Brown’s previous studio release, Stay With Me, was fortified by sturdy contributions from bassist Alex Al, drummer Teddy Campbell, and keyboardist Herman Jackson. That skillful trio has returned to aid in the recording of Sending My Love, once again providing brilliant augmentation in bolstering Brown’s magical tunes.

The joyful opening instrumental track entitled “Come Go With Me” immediately delivers Norman’s musical love with a jaunty bounce featuring Brown’s nimble fingers leading the way with quick runs on his fret-board. The horn accompaniment is a punchy complement, but the agile guitar showmanship is the premier focal point of this excellent album opener, and will remain so throughout.

The romantically beautiful “Here’s My Number” tenderly follows and it is on this type of compassionate composition on which Norman best sends out his love. The notes cascade gently from his guitar like falling raindrops to nourish appreciative flowers during soft springtime showers. Soft sultry female background vocals alluringly beckon near the song’s end to reinforce the already stimulating allure.

The first true vocal track on Sending My Love is a stirring and soulful remake of the Kenny Loggins classic “Celebrate Me Home.” On this, the only non-original song contained on Sending My Love, Norman sings a touching duet with his daughter Rochella, who has evidently inherited her father’s expressive and dynamic vocal talent. The song’s sweeping melody is caressed by the duo’s vocals with an assist from the Sounds Of Blackness vocal choir. Norman shows courage in undertaking one of Kenny Loggins’ most endearing songs, one which always touches me very deeply. Norman’s tender guitar, which reaches a stunning crescendo at the song’s closing moments, teams with some splendid piano play by Emmery Williams.

A solid foundation formed by the rhythm combination of the ever-superb Alex Al on bass guitar, Kevin Ricard on percussion, and Teddy Campbell on drums is showcased on the up-tempo Cuban Rhumba/Latin-infused pace of “Play Time.” Brown adds some Spanish guitar influenced nuances mixed with fusion laced licks that smack of fluid brilliance. The commanding conga drum play is relentless and the horn chart is spirited, all contributing to make this a memorable stand-out track.

The laid back chill of “Special Moments” is amorous and enticing. This one is very relaxed and easygoing in the spirit of one of Norman Brown’s jazz guitar influences, the legendary Wes Montgomery. Brown coaxes mellow expressive tones from his instrument that are simply sublime as he demonstrates his noteworthy technique on this beautiful song.

The subtle rhythm enhanced by soft handclaps and even softer muted female background vocals adds up to a retro rhythm and blues feel on another song graced by Norman’s suave vocals. It’s entitled “I’m Pouring My Heart Out” and has a leisurely pace. The song that ends the CD, “One Last Goodbye,” employs similar elements, but this time the background vocalists step more to the forefront to pair prominently with Brown, who imparts his paramount vocal performance on the disc. His solo guitar break placed near the end before the final chorus is fleetingly brief, but sweet as the sap from sugar cane.

“Thinking About You” is reminiscent of some of the finer instrumental melodies employed by George Benson. Upbeat and optimistic, it’s easy to imagine Norman playing this song with his eyes closed and a huge smile on his face. Brown’s unfailingly ultra-fine guitar work is scaffolded over the persuasive and driving rhythm section and peppered by a small taste of smooth horn interjections. This one is guaranteed to be a huge fan favorite when played in concert.

Herman Jackson, who co-wrote “Coming Back (Return of the Man)” with Norman Brown, provides some very tasty keyboard offerings to couple with the dazzling guitar work of Brown on this mid-tempo instrumental that is about as good as contemporary jazz gets. This song shimmers and sways, and is sure to please the multitudes who expect only the highest quality from this exceptional artist.

Sending My Love is an extremely satisfying listening experience and a recording that added another rich installment to Norman Brown’s vast inventory of critically acclaimed recordings. The entire production team assembled here deserves accolades; representing state of the art perfection in all aspects. Yet, as anyone who has ever witnessed Norman Brown’s live shows will attest, seeing him perform live is also a truly magical experience. Grab this magnificent release, as well as grasp onto the opportunity to witness this guitar maestro on each occasion he graces the concert stage in your area.