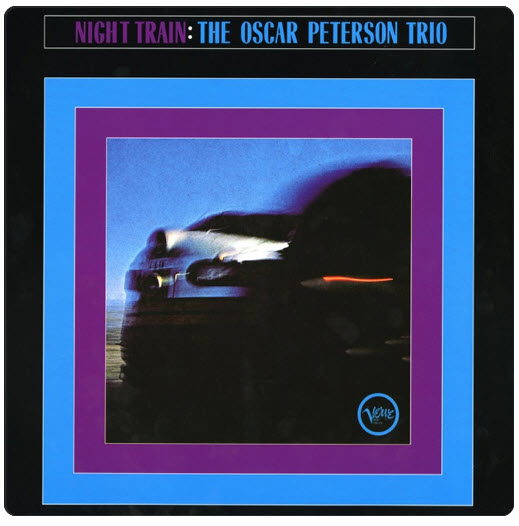 This classic jazz piano album Night Train was recorded by The Oscar Peterson Trio almost 60 years ago in Los Angeles on December 15 and 16, 1962. It’s a record that belongs in every collection, whether you’re presently a jazz fan or whether you’ve taken a vow against improvised music, thinking it’s incomprehensible and annoying. I’ll give you three reasons why you might just be listening to this record on a regular basis for the next ten or twenty years:

1. No one ever dazzled the piano keys like Oscar did, or swung as hard with a bluesy feeling (okay, so that’s two or three reasons in one).
2. No one ever played in a tighter group than this trio – Ed Thigpen on drums and Ray Brown on bass, along with Oscar on ivory, set a standard for ensemble playing which is a model for all musicians, whatever their genre. These guys deliver everything an orchestra could, and more.
3. The joy and intensity of this music will have an impact on your life which will not be forgotten anytime soon.

The original album contained just 11 songs, and the re-released digital version adds several more, which are unnecessary and detract from the beauty of the concept. Speaking of beauty, the cover photograph by Pete Turner of the train in motion is stunning. Verve recordings were always known for their quality of music and the outstanding artwork on their covers. Night Train is one of the most famous jazz albums of all time, and deservedly so on both counts.

The 11 tunes are on the shortish side, none much longer than five and a half minutes, so if you’re thinking that jazz is some form of endless noodling and self-indulgence, this is the album to contradict that notion. With every tune the group snaps to it and you are drawn in right away. Before you know it, the album’s over and you’re eager to listen to it again. This is the kind of precious possession you’d save if your house were burning and you had only a minute to fetch something other than your family.

The playing is elegant, restrained, and yet hard-driving. This is the kind of record that gets 15 year old doe-eyed girls in Victoria named Diana to thinking they’re going to grow up to play jazz piano, and it’s the kind of record that makes electric bassists head down to their music store and trade up to an all-acoustic bass fiddle so that they can play with some real bottom end. It’s also the kind of record that makes drummers forget all about John Bonham, and starts them to dreaming of the subtleties they can achieve with brush work. And if you think this is some simple introduction to jazz that was recorded to popularize the form, you’ll need to think again. This stuff is both sophisticated and irresistible.

Take the title tune for instance. It was a classic before this record, but it was meant for a big band, Duke Ellington’s to be precise. Peterson delivers this tune with elegance and amazing dexterity, putting the stamp of his own formidable personality on his arrangement. Then comes ‘C Jam Blues’ , as if to remind the listener that it’s all about the blues. His rendition of ‘Georgia On My Mind’ is a revelation, for this is a song that has been done so many times in so many ways you would it’s impossible to wring anything meaningful from it, yet Oscar’s rendition of this piece is enough to move one to tears. Other standout tracks are ‘Honey Dripper’ and ‘Hymn to Freedom’, the latter being a very stirring and emotional piece that begins as a solo, with Ed and Ray joining in gradually to provide a rousing finish. There the original album ended.

Oscar Peterson was a lifelong Canadian and the winner of seven Grammy awards. He started playing piano at the age of five, and progressed from playing boogie-woogie to being named “the Maharajah of the piano”, heavily influenced by people like Nat Cole and Art Tatum, the masters of jazz piano. It was said of his playing in later years, after a stroke, that “a one-handed Oscar was better than just about anyone with two hands”. Though he passed away in 2007 his music lives on, and will live on for decades to come. Whenever anyone wants to know what the hands of a genius can do with piano, and what can be accomplished with a trio of great musicians, Night Train will be at or near the top of every list.

Your next new record should be this old one.