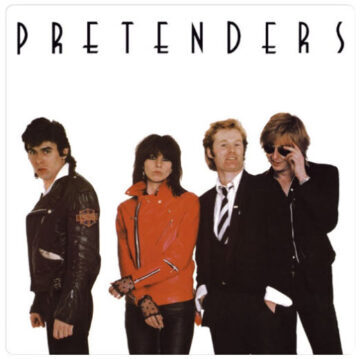 “This group’s not going anywhere. I’m not gonna work with them again.” ~ Nick Lowe, producer of their first single.

Yes, the famed Nick Lowe did indeed make those remarks about Pretenders after working with them on their first single, which just happened to be a remarkable cover of The Kinks’ classic track ‘Stop Your Sobbing’. But then Nick is known for polished power pop, the very antithesis of what Pretenders are all about: hard-edged vocals, striking guitar work and in-your-face lyrics written and delivered almost off-handedly by the beautiful, obsessive, and obsession-inducing Chrissie Hynde. Their debut album was released 41 years ago this month, and it still rocks, maybe harder than any debut album in history. Chrissie and her band make the debuts of The Beatles’ and even the Stones sound like the imitative and weak-minded efforts of schoolboys. Only Elvis himself at Sun Records made a more astonishing first album than Chryssie Hynde.

The opening track ‘Precious’ hits hard and fast, sounding a little like The Cars, sounding a lot like the girl friend Ric Ocasek had in mind. “Do it on the pavement”, Chryssie sang, interspersing rhymes such as “ethereal” and “imperial” with phrases not often heard in rock music up until that time : “shitting bricks”, and a daring “fuck off”. Whew! – who was this ball of fire, music fans asked. Women as well as men. Combined with London Calling from The Clash, Pretenders signalled the end of something (disco) and the beginning of a new era. Record buyers loved Pretenders immediately.

Oh, and that Kinks cover? – it’s the tamest thing on the album. It’s a great track, and brought to the forefront the best female vocalist in rock since Ronnie Spector belted out ‘Be My Baby’. But ‘Sobbing’ is a formulaic tune, hardly representative of what Pretenders brought to their performances. You had to listen to ‘Brass in Pocket’ to hear their true brilliance, their punk attitude wedded to daring lyric, and their unexpected rhythms.

It’s been said countless times, but it remains true: in live performance, Pretenders simply killed. In the early ’80s, there was no band alive who matched their intensity in concert.

“I’m special, so special, I’ve gotta have some of your attention, give it to me.” – from ‘Brass in Pocket’

She had her moments of tenderness too. ‘Lovers of Today” is a true power ballad – moving from delicate moments to authoritative guitar solo, while ‘Private Life’ echoes the rhythms of The Police while sounding far more personal and intimate than anything Sting had ever accomplished, good as Regatta de Blanc was. What Chryssie had going for her was the ability to arouse an audience, regardless of what she was singing, and no matter the listener be male, female or anywhere in between.

Key track that should have been a hit: ‘Up The Neck’. It’s got it all – thrumming bass, a fabulous opening guitar riff, and the best first line of any rock song ever: just three words “Anger and Lust”. It’s highly pertinent that with they often chose this tune as a concert-closer. The impact is tremendous and displays Hynde and the band at their best.

Nearly forty years on, Pretenders still ranks near the very top of debut albums. There’s not a weak track on the record, not a one. And as for the band’s future, well, Nick Lowe was right. Pretenders never went anywhere that Nick Lowe did.