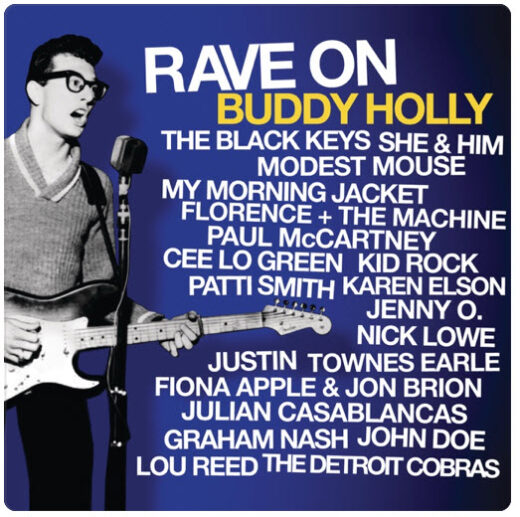 Buddy Holly’s untimely death in a plane crash more than 50 years ago was an inestimable loss to music: what might have come from him has often been speculated, for this very first of the singer-songwriters was barely 22 years old and had travelled a quick path from Elvis imitator to inspiring original. There are decades of music fans who have spent most of their lives regretting his passing and honouring his music. The legend continues to this day, and the tributes pile up, the latest being the new album Rave On Buddy Holly’, which assembles a surprising collection of musical talent spanning several genres and a plenitude of ages, attitudes and influences. While the result doesn’t quite qualify as Album Of The Year, several standout tracks revitalize the Holly legacy.

The album opens with The Black Keys’ version of “Dearest”, and this is a real departure from their dark, muddy and sex-obsessed inclinations; we’re big fans of their music but were still frankly astonished at both the frankness and tenderness of their delivery here.

Fiona Apple is one great vocalist and her version of “Everyday” is probably the truest to Holly’s own rendition of this song. This recording is a sheer delight and a return to the innocence of the late 50s, rendered straight ahead as an impossible but worthy dream.

Then on to a highly questionable over-produced “It’s So Easy” by Paul McCartney, who begins strongly and finishes like an overwrought blues shouter. The song goes on twice as long as it should have, and begs for a producer to tell Macca he ought to hold back with his desire to sound younger and more current. This is the most puzzling track of all on the album, considering the huge and oft-acknowledged influence that Buddy Holly had on The Beatles. Holly would have hated this track and would likely have disavowed songwriting altogether if this had become the only version of his work in existence.

However, Holly would have been dazzled by several other tracks on this album, particularly by the contribution of several women: Florence And The Machine’s “Not Fade Away” finally delivers on her considerable reputation. This song has been covered a zillion times, notably by the early Rolling Stones, but never quite in this over-the-top fashion. Karen Elson’s version of “Crying, Waiting, Hoping” is more drum-propelled than the original, and actually brings to mind the instrumental track of Holly’s more famous hit “Peggy Sue”, but Elson’s vocal is a pop wonder. And as for Patti Smith’s version of “Words Of Love”, she hasn’t sung better in years.

The highlight of the album though, is John Doe’s version of “Peggy Sue Got Married” – though Buddy wouldn’t recognize his tune here he would be overwhelmed by both the interpretation and the instrumentation – this is an amazing piece of work from an equally amazing musician. His rendition with The Sadies of the Johnny Cash classic “I Still Miss Someone” was and is a showstopper, but his tribute to Holly here is both ethereal and gut-wrenching.

On the other hand Kid Rock’s rendition of “Well Alright” misses the point completely by ignoring the wonderful dynamics and subtlety of the original. True, Kid is a stronger vocalist than most people credit, but he is completely out of his element here. That said, both Nick Lowe and Graham Nash turn in stellar performances on “Changing All Those Changes” and “Raining In My Heart” respectively, the latter being an achingly beautiful and emotionally honest bravura take that may well be one of Nash’s best vocal performances ever, no small praise for a man who was for a time the compelling voice both in The Hollies and in Crosby, Stills Nash and Young.

All in all the album Rave On Buddy Holly is a Must Have, though containing some startling flaws – and if it sends some new fans back to the originals (see below) better still. The recordings by Holly himself are essential to any record collection.