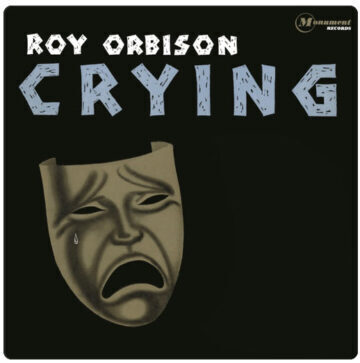 Not even Elvis could match the strength, the passion and the pop opera supremacy of the Big O.

One of the first long-play albums I ever bought was by Roy Orbison. Up until then I‘d saved 84 cents at a time for singles at the local discount store that later became a K-Mart. For me an investment of $3.15 in an album meant I‘d have to like each and every song on the record, because I was giving up buying three other singles by other artists. But hey, Roy never made a bad record. At least not as long as he was recording for Monument Records. So I bought the entire album Crying, and it’s been a musical mainstay of my life ever since.

And not just my life. Apparently Barbara Amiel, the wife of publishing scion and convicted felon Conrad Black, used the songs of Roy Orbison nightly to tranquilize her from the harsh realities of attending a Chicago courtroom where Conrad was on trial in the fall of 2007 for corporate dealings later found to be perfectly legal.

No, not just my life. Bruce Springsteen tells of listening to Roy Orbison up in his bedroom all those years ago, while dreaming of his escape from the working class life in New Jersey. Bruce grew up on Roy, Del Shannon, and Gary U.S. Bonds, just as I did.

Not just my life. Elvis Presley himself was so impressed with Orbison‘s singing that he went into the studio to record one or more of his tunes. Elvis gave up after several long days, saying he couldn‘t match the originals. There have only been two singers who have truly dared to put themselves at risk by recording a Roy Orbison tune: K.D. Lang, who recorded “Crying” as a duet with Roy in the late eighties, and Don McLean of “American Pie” fame, who recorded “Crying” in the 70s. They did well, but not so well as Roy.

“I‘d be two feet away, and when he hit those high notes, it was quiet and heartfelt. But the emotion would go through you like a power drill.” ~ Dion DiMucci

Roy was the writer, or the co-writer on most of his songs. He didn‘t compose songs like most people did: verse, verse, chorus, verse, verse. Roy‘s songs mostly started slow and built from a diminuendo to a crashing crescendo, but their structure wasn‘t easy to follow, even for the experienced musicians who played with him. Listen to “Running Scared” or “In Dreams” and you‘ll hear something that has more in common with symphonic bolero music or opera than with rock and roll, with the emotional antidote of the Anita Kerr singers as backup, alternated by a group of guys called The Candymen.

His producer at Monument Records, Fred Foster, made with Roy some of the best-sounding records ever. Their collaborations still stand as prime examples of recording studio artistry after almost fifty years. Here‘s the killer: Roy had a semi-operatic voice that fooled you time and again. He started his songs in a whisper. In live performance and in the studio, people wondered if he would even get through the song. He seemed to gather strength with every verse, with every emotional twist and turn of the lyrics. By the time the song was over the chances were pretty fair that you would be reduced to tears. The only thing to do was move the record player needle back to the beginning and listen to the song again.

No one else has ever done with pop music what Roy Orbison did; he poured out his heart the way Hank Williams did; he wrote simply the way Don Gibson did, and he sang the way Pavarotti sang. But he did more than that. Roy touches the subconscious mind in a way that no other singer ever attempted. He wrote and sang about dreams, what dreams mean, how they can affect your life, how they can haunt you, how they can remind you that we are more than we seem.

David Lynch famously used Roy‘s song “In Dreams” for his soundtrack of his movie Blue Velvet, and gave some hip street cred to those of us who had been listening to these songs for years. No one though, except Sigmund Freud, brought the subject of dreams to the forefront as did Carl Jung.

“Significant dreams. . . are often remembered for a lifetime, and not infrequently prove to be the richest jewel in the treasure-house of psychic experience.” (Carl Jung)

Someone once said that everyone leads two lives. Maybe it was Jung, maybe it was Freud, or maybe it was Neil Diamond. Most of us keep that second life secret. With Roy, his heart was on his sleeve. Sometimes it was a happy heart, as in “Pretty Woman”, and “Running Scared” where he sets the audience up to think he‘s in for one more heartbreak, but gets the girl in the end. Those two songs are always thrilling to hear.

Here‘s my theory, for what‘s it worth. We use music, television, books and movies when we‘re young to teach ourselves what to feel, how to feel, how to conduct a romance, how to talk to our buddies, and in general, how to live. Some of it sticks with us and becomes part of us, shaping our outlook on life. Some visual and aural patterns (and music is, essentially, pattern language and pattern recognition) stimulate neural responses in us that are so pleasurable we seek out repetition. This is a fancy way of saying that Bruce and Barbara and Chris Isaak and I are hooked on this stuff; we can‘t get enough of it, and in our future, we‘ll be demanding the music of the ’60s at the old age home.

“And music? There‘s no obvious reason for it to exist, since the ability to perceive pitched sound provides in itself no contribution to survival. Dutton notes Charles Darwin‘s suggestion that musical tones and rhythm were part of courtship for our ancestors. And perhaps musical sounds were a way of inventing language. Dutton finds that plausible and suggests that music and dance also build “empathy, co-operation and social solidarity.” He speculates that music, dancing storytelling and other art forms “evolved specifically to strengthen the social health of hunter-gatherer bands.”

Roy recorded some great neglected material in the 1970s, lacking only a producer of Fred Foster‘s talent to bring drama and polish to his newer material. Roy found such a producer in Jeff Lynne in the late 1980s, when he recorded the album Mystery Girl, the title of which was written by Bono, one of Roy‘s biggest fans. The Mystery Girl album includes the masterpiece “A Love So Beautiful”; this is a song that can only be appreciated later in life, when one realizes the immense tragedy of losing what should never have been lost. His everlasting theme from his first to his final album? – courtship and romantic love. No one ever did it better.