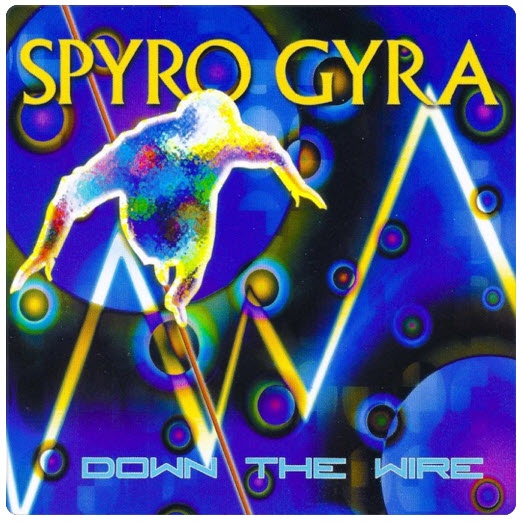 Over the last 40 plus years Spyro Gyra have performed over five thousand shows and released thirty-one albums (not including their “Best Of…” compilations).  In the process they have sold over ten million albums while also achieving one platinum and two gold albums. Their biggest hit and jazz radio mainstay came with “Morning Dance.”  Perhaps my favorite collective of the group was when dynamic live performer Bonny B. was on drums; consequently Down The Wire has become one of my all-time favorite jazz albums.  It also was nominated for a Grammy Award for Best Pop Instrumental Album in 2010.

“Life is being on the wire, everything else is just waiting” ~ Karl Wallenda (of the Flying Wallendas acrobatic family)

Spyro Gyra is an enduring contemporary jazz ensemble having endured because they always endeavor to provide their fans with interesting and creative music, both on stage and in the studio. Down The Wire, the 2009 release on Heads Up International was another fine addition to their exceedingly noteworthy catalog. From start to finish, it contains marvelous musicianship and inspired compositional contributions by every member. Each savory listen reveals added depth, nuance, sophisticated intricacy, and harmonic hues to contemplate and enjoy.

The title track “Down The Wire,” written by longtime group bassist Scott Ambush starts the CD off in fabulous fashion. Each member of the band has freedom to shine brightly on this up-tempo funk filled song with a danceable, head-nodding, deep groove led by Ambush himself. No wonder it was chosen to lead off the CD, and earn title track designation. The song is a surefire attention grabber. It’s followed by a lovely Latin flavored treat entitled “Unspoken,” written by the group’s guitarist Julio Fernandez. Fernandez provides his usual polished top-notch performance and is ably aided by percussionist Gerardo Velez and the skilled sax stylings of Jay Beckenstein, the group’s founding father.

“I never thought in commercial terms. I just thought the groups Weather Report and Return to Forever were the next step in the evolution of jazz, and that we would be part of it.”  ~ Jay Beckenstein

A cheerful playfulness encompasses “Not For Nothin’,” showing the band having fun in a song that recalls their finest past work. Having fun has always been a key component of Sypro Gyra, another major basis for their widespread long-term appeal.

“Island Pond” is an introspective ballad that is utterly beautiful; at first featuring the tender tinkling keyboards of Tom Schuman, followed by Fernandez’s pleasingly graceful guitar. The two of them alternate in sharing the forefront with Beckenstein’s emotive saxophone. It’s one of those splendid songs that, even at six minutes running time, you wish could go on forever.

Bonny B. was a true child prodigy. At the tender age of three he was already hitting the back of his mom’s chair drumming beats. By the age of six, he was touring the Caribbean Islands with “The Bonaparte Brothers” led by his father Belgrave Bonaparte, a pan pioneer and founding member of the Trinidad All-Steel Percussion Orchestra (TASPO) of Trinidad and Tobago.

“What It Is” is unmistakably Spyro Gyra, providing the distinctive timbre and interesting quality sound that earned the group its reputation amongst the vanguard of innovative Contemporary Jazz. It’s a Julio Fernandez composition sure to be a concert classic. It may well be the paramount song on a CD full of very good ones.

The slightly melancholy “A Distant Memory,” features nice contributions from the tunes composers, Schulman and Beckenstein, with the later doing a first-rate Pied Piper impersonation. Bonny B shows off his funk-blues vocals on “Make It Mine.” The song with its heavy thumping groove gives the already diverse CD added variety, and reaffirms that you cannot place the group in any strict pigeon-hole. The addition of Bonny B to the group, was a very prudent musical decision. He is a well-oiled machine behind the drum kit, providing perfect sizzling rhythm with occasional crucial flash. This second offering (third if you count the Christmas CD) with him as a member of the ensemble finds him fitting in alongside these other virtuoso musicians, tight as a tourniquet.

The production value, as always with Spyro Gyra, is flawless, with the flow of the tracks masterfully presented. Give Down The Wire a listen or two, and you just may well also fall in love with this marvelously alluring collection.