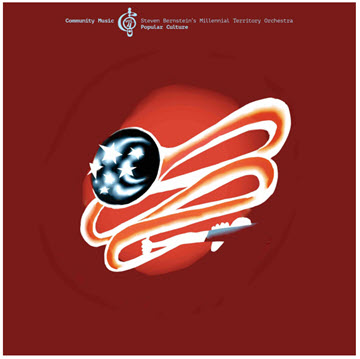 “Where are you going to get original arrangements of The Grateful Dead, Eddie Harris, The Beatles, Bessie Smith, Ellington and Charles Mingus, and not played as novelties but, like, this is our music?” Steven Bernstein asks. Popular Culture, that’s where.  It’s what the Millennial Territory Orchestra (MTO) has done brilliantly for 20 years: playing Bernstein’s arrangements of the American Songbook, but reimagining that tradition in their own image. “I’ve always been into the idea of popular culture: what do we all connect with? What brings us together?” Bernstein adds.  “Also, I just like the music.”

It’s called Popular Culture and not ‘Popular Music’ because these artists made music for the people, whether they moved a lot of units or not. Eddie Harris, whose playful, wide-ranging crossover musical spirit just might be something of a role model for Bernstein, wasn’t often critically acclaimed, but he was the first jazz artist to receive a gold record.  The iconic Charles Mingus, on the other hand, never had a gold record but he recorded for major labels like Columbia and Atlantic, where he was label-mates with artists like Barbra Streisand and Aretha Franklin.  Then there are deep cuts like The Grateful Dead’s “Black Peter” (listen/share) and The Beatles’ “Long, Long, Long”: great songs that weren’t hits but are still known and loved by millions because they’re on best-selling albums.

The MTO plays an elegant, reverential take on “Duke Ellington’s Sound of Love,” a tune Charles Mingus wrote in 1974 as an elegy for one of the few human beings who awed him.  Ellington awes Bernstein too: he made it a point to listen to Duke Ellington records every day for thirty years. Ellington appears again with “Flirtibird,” from his score for Otto Preminger’s great 1959 Anatomy of a Murder; that entire album is itself a key pillar of the MTO sound.

Bernstein embraced The Beatles at a relatively advanced age: not until he was in his early 20s, when someone left a copy of The White Album at his loft after a party.  “And I started listening to it and I thought, this is incredible!” he recalls. “It changed my life.”  He began writing an arrangement of “Long, Long, Long” in 2003—and finished it on the plane from Italy to San Francisco to say goodbye to his mother.

“I’m Gonna Leave You By Yourself” from Eddie Harris‘ overlooked and adventurously eclectic gem of a record called Silver Cycles (1968), was produced by Joel Dorn, who was Hal Willner‘s mentor, who was Bernstein’s mentor. Furthermore, Dorn’s protege Kevin Calabro founded Royal Potato Family, the record label releasing Bernstein’s ‘Community Music’ series of which Popular Culture is the fourth and final volume. So it comes full circle.

“Black Peter” (listen/share) is from The Grateful Dead‘s 1970 classic Workingman’s Dead, a record that Bernstein never owned in his younger years, but then he didn’t have to—in ’70s Berkeley it was all around.  But what does the MTO have in common with The Grateful Dead?  A deep and abiding connection to American vernacular music, a point embodied by what Bernstein calls a “tri-coastal” arrangement: “It has a New Orleans feeling, the way I imagine a riverboat band may have sounded, then the New York City vibe because of the intensity and intent,” he says. “And in the bridge you hear that West Coast psychedelic haze.”

Bernstein enjoys getting under the hood of these songs, reverse-engineering them, determining what’s essential to the song and then thinking about what this particular group of musicians can do with it.  So he’ll zero in on that secondary melody in “Long, Long, Long” and turn it into an entire introduction.  “It’s like, look at that!  Let’s make something of it,” Bernstein says. “I always say, just try to get as much music in the music as possible. The more music, the better.”