Steve Forbert Then and Now 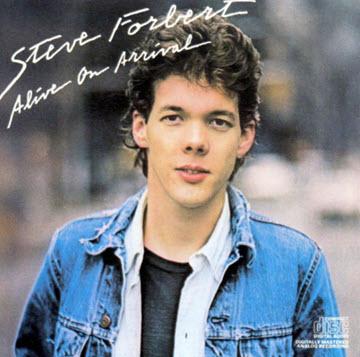 Was there ever a debut album more fittingly titled than Steve Forbert‘s astonishing 1978 release Alive on Arrival? From the opening harmonica intro for the folk rocker leadoff track, “Goin’ Down to Laurel”, to the closing notes of the powerful, bluesy, “You Cannot Win If You Do Not Play”, what music fans heard was a fresh and vital singer/songwriter who was infectious, intelligent, and musically inventive. Forbert was immediately saddled with the moniker “The New Dylan”, an evaluation that has cursed a hundred talents.

Dylan himself had entered one of the weakest phases of his career with his completely misguided efforts at transforming himself into a big band pop-rocker, almost as though he had been listening to much Phil Spector. Consequently his own 1978 release Street Legal was for the most part trashed by the critics. Forbert’s youthful enthusiasm and easy-to-love musicality were eagerly embraced by reviewers and music fans. Dylan sunk deeper into despair over legal battles surrounding custody of his children. He was bummed out in more ways than one. But Stevie? -man, he seemed like one happy, irreverent and witty guy. The kinda guy you’d love to befriend, and precisely the kinda guy Dylan would never be. So Alive on Arrival made a lot of noise upon its release in certain quarters, and while it didn’t quite make Forbert a star, it earned him the chance to open for some mighty fine headliners, such as Joan Armatrading.

I was fortunate enough to see Forbert in concert with Armatrading at the height of their popularity, back in the late ’70s. At the time Alive on Arrival was selling modestly well, while Joan’s then current album To The Limit was one of those records that was strong enough to cause a marriage to happen or a divorce to ensue. In other words, she was a musical force to be reckoned with. Sometimes, though, the headliner gets blown off by the stage by the opener, and that’s just what happened in this case. As I recall, Forbert needed only his guitar and harmonica, being supported by the strength of his engagingly direct material. I encountered a similar experience when witnessing a young Lucinda Williams opening for The Cowboy Junkies. Sweet indeed, when a relatively unknown performer takes some of these First Steps at a concert and one hears a palpable and thrilling reaction from the audience which might be summed up as “wtf just happened?!” Well, Steve Forbert happened that night for a few thousand fans, because he was nothing if not undeniably Alive on Arrival.

He played better guitar than Dylan, had a greater command of the harmonica that Bob ever will have, and he possessed a voice that was a little strange but also strangely loveable. He also had a way with words that revealed far too much: not that his songs were obvious, but they sure didn’t conceal meaning or intent in the mysterious and sometimes off-putting veils of mystery that Dylan seemed to cast upon everything. Consider these sentiments from Forbert’s opening track:

The true highlights of that first album, though, were “It Isn’t Gonna Be That Way” , a moving and tender ballad, and the upbeat “Steve Forbert’s Midsummer Night’s Toas”‘, a sharp contradiction and oblique reference to “Bob Dylan’s Dream” and “Bob Dylan’s Blues”. It takes balls to include your own name in a song title. Forbert’s tune recalls Dylan’s simple guitar styling, but his folk-rock approach to the subject matter is a real triumph. The song is a conscious deconstruction of Dylan, and it’s a tremendous compliment to Forbert that he pulls it off. It’s almost as though he had embodied the perfect antidote to those who didn’t quite get how brilliant Dylan was – here was equal musical brilliance that somehow managed to be more likeable, while being simultaneously slyly imitative. New and improved. So yes, the title cast upon Forbert as “The New Dylan” was more than appropriate. Anyone who denies the aptness or the unfairness of the comparison is doing Alive on Arrival a disservice. Here’s another example of Forbert’s innate lyricism:

“Here’s to all the shitty jobs that I despise/ here’s to two-bit guarantees and other lies/ here’s to roads of burning tar and hot cement/and here’s to money in my hand and where it went”.

“What Kinda Guy” was a rockabilly wordfest that might be well be your new favourite song were it released today. It’s the kind of thing that Loudon Wainwright does so well, and perhaps no one other than Forbert ever managed this kind of humour and musicality all at once.

So, what happened to this promising talent? Well, his follow-up album Jackrabbit Slim a year or so later wasn’t quite the wonder that the first one was, even though it contained some great stuff, including “Romeo’s Tune'” which turned out to be Forbert’s only top 20 hit. Subsequent albums fared poorly and he was dropped by his label. Since then, he has released new material on a sporadic basis, and appeared continually at folk festivals around the world. Several thousand dedicated fans continue to buy his records, so he’s had a steady career and a faithful following. His 1995 album Mission of the Crossroad Palms is often cited as the best of his later work.

To these ears, though, he has frequently hit the mark with almost everything he’s done, particularly his 2002 tribute album, Any Old Time, which was dedicated to the songs of the country legend Jimmie Rodgers. His 2012 release Over with You is a fine suite of songwriting about love and loss, although his once-exuberant voice betrayed some heavy weather while retaining all its early appeal.

In 2017 he received a cancer diagnosis. Having survived treatment, in 2018 he released a memoir entitled Big City Cat: My Life in Folk Rock, and an album entitled The Magic Tree. He continues to tour to this day. Above all Steve Forbert  is a musician’s musician, and a songwriter supreme, dedicated to his craft and definitely worthy of renewed appreciation.