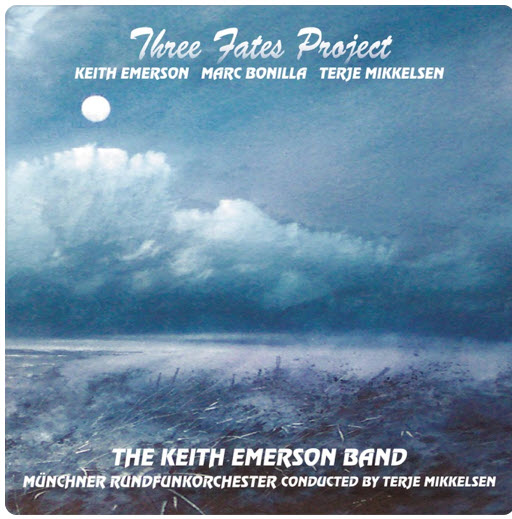 Legendary British keyboard wizard Keith Emerson has enjoyed an illustrious career as a composer, pianist, and founding member of The Nice and Emerson, Lake and Palmer, as well as other various collaborative and solo ventures. He is often cited as being one of the founding fathers of progressive rock for his groundbreaking fusion of classical musical elements into rock music, and is perhaps the single most technically accomplished keyboardist in rock history. His pioneering experimentation with the Moog Synthesizer while in The Nice, and later use of the instrument for his celebrated shifting Moog solo at the end of supergroup ELP’s first hit “Lucky Man,” helped move electronics into the mainstream of rock.

While a rock group being backed by an orchestra is not a new idea (Deep Purple, Procol Harum, Moody Blues, and even ELP themselves come immediately to mind) the concept behind this recording has the orchestra much more prominently involved as an integral component. Furthermore, the Three Fates Project recording is exclusively instrumental which bolsters the finished product’s unique impression. The full massive symphonic power of the 70 piece Münchner Rundfunkorchester (Munich Radio Orchestra) is undeniably a significant focal point of the project. Maestro Terje Mikkelsen, the world-renowned conductor, manipulates the project’s luscious orchestral landscapes with a supremely masterful touch.

The Keith Emerson Band consists of Keith Emerson (piano, organ, moog synthesizer), Marc Bonilla (guitars, mandolin), Travis Davis (six string bass), and Troy Lucketta (drums). According to Marc Bonilla, the title for Three Fates Project refers to the three masterminds behind this ambitious musical mission: Keith Emerson, with his compositions and keyboards, Marc Bonilla, with his impressive guitars, writing, and production, and the above mentioned Norwegian Terje Mikkelsen who resourcefully guides the orchestra. Their combined inventive arrangements forge a seamlessly graceful mix of classical with rock music. Emerson and Bonilla each provide reworked versions of some of their choicest cuts to accept the orchestral adornment, as well as premiering a couple of appealing new creations.

“The Endless Enigma Suite” is divided into two parts to kick off the album. On “Part One,” the orchestra reveals the song’s true sweeping grandeur and great beauty. It begins with a slightly feverish percussive tempo then leisurely winds down in slow splendor with strings and French horns pacing the melody alongside Emerson and Bonilla before ending with a splash. “Part Two” accentuates guitar runs from Bonilla as the tempo builds and the melody swells with an orchestral sumptuousness which is richly thrilling. The songs, originally on ELP’s Trilogy sans the suite in the title and separated by “Fugue” (a solo piano bridge); at first seem a bit anomalous due to the absence of Greg Lake’s stately vocals. However in this setting, the brilliance of the composition is brought to an even brighter light.

American guitar phenomenon Marc Bonilla fronts the proceedings on a re-invention of “American Matador,” which appeared in 1993 as the title cut of his second solo release. A tad more gently restrained than its predecessor, it still displays Bonilla’s fluid Spanish guitar lines with a fiery tenacity that envisions a cape-wielding daredevil matador twisting and turning in dance with a confused bull. Outstanding is the adjective that won’t leave my head while absorbing this powerful and compelling song.

A new Emerson composition entitled “After All of This” features his piano ambling slowly in step with the symphony in a deliberate tempo/melancholy-themed piece of music that would fit snuggly in a soundtrack score. It is the sort of highly visual dramatic music that discloses a story in barely over four minutes time. Marc Bonilla’s new song titled “Walking Distance” follows. It is a brief, but pleasing, song that makes use of a seizing and releasing of musical tension. This piece confirms the writer’s aptitude for symphonically based endeavors. Both Emerson and Bonilla have prior experience in scoring music for film and TV and they handsomely excel in this illustrative idiom.

The unchallenged opus on Three Fates Project is “Tarkus (Concertante),” offered in all of its twenty-plus minute glory. The “Tarkus” suite was always one of my progressive rock favorites, containing an innovative blend of high energy virtuosity and contemplative and moving melody. On this tour-de-force the entire Keith Emerson Band shines brighter than Planet Mercury’s mid-day Sun. Drummer Troy Lucketta demonstrates a total control of Carl Palmer’s challengingly complex percussive time signatures, and the robust play of bassist Travis Davis is consistently full-bodied. The exhilarating Keith Emerson and Marc Bonilla can only be described as utterly magnificent; while the lush tiers added by the orchestra are a tremendous asset. The monolithic infectiousness of “Tarkus (Concertante)” is akin to an aural whirlpool. It is inevitable that the listener will fall prey to its powerful vortex tow.

Alberto Ginastera, one of South America’s greatest composers and the composer of “Malambo,” had studied with Aaron Copeland, another composer of influence to Emerson. The Keith Emerson Band had included this song on their 2009 release Keith Emerson Band featuring Marc Bonilla, but alas, I have not yet heard that CD. “Malambo,” as presented on Three Fates Project, is a real treat with a frenetic driving rhythmic quality in the midst of piccolos, brass, and other instruments dueling with Bonilla’s guitar and Emerson’s keys in a mad swirling dance.

Bonilla’s “The Mourning Sun,” is a beautiful orchestral piece with the graceful string section providing the syrupy bittersweet air that conveys lament. It’s a short work that provides a nice change of pace from the previous selections. “Abbadon’s Bolero,” another song from ELP’s Trilogy begins slowly and builds while conveying a sense of soldiers marching thanks to the insistent snare drumming and repeated concise melody. Keith plunges in near the end with his mighty Moog to carry the song to its conclusion.

The ever popular Emerson re-tooling of Copeland’s “Fanfare for the Common Man” ends the CD on another high note. The regal song’s contagiously driving soul is the perfect vehicle for the members of The Keith Emerson Band to thrive mightily. The Münchner Rundfunkorchester adds flavorful musical sheen, but it is the imperial keyboards of Keith Emerson that ride magnificently in the lead position, spurred onward by the dynamic drums and weighty guitar.

As stated earlier, this excursion was an ambitious undertaking by all the involved participants. The monumental success they have achieved with Three Fates Project can be affirmed by anyone capable of listening with an open mind uncluttered by musical prejudice.