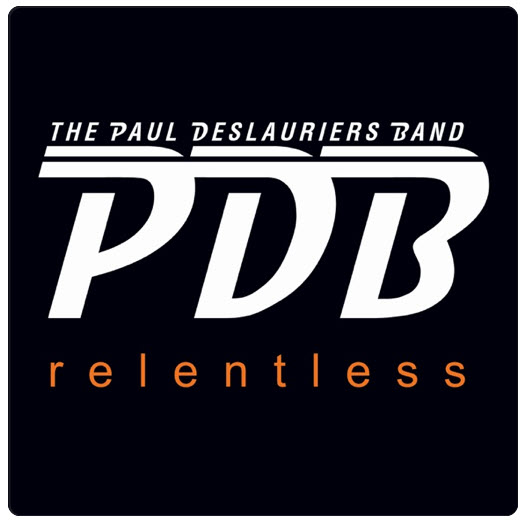 Relentless is the title of the brawny new release from The Paul DesLauriers Band on Big Toe Productions that expertly exploits the blues/rock power-trio configuration forged long ago by Cream, the Jimi Hendrix Experience, and Blue Cheer. Cream’s Eric Clapton has stated that the idea that a blues/rock trio could be a viable creative option was sown after he witnessed the genius and musical mastery displayed by Buddy Guy and his band. The triumvirate of gifted musicians that comprise the line-up of The Paul DesLauriers Band are Paul DesLauriers (pronounced de-loree-yay) on vocals, guitar, piano and theremin, Sam Harrisson on drums and percussion, and Greg Morency on 4 & 8 string bass guitar. This Canadian based group places an emphasis on dramatic instrumental virtuosity teamed with a tasteful crystal clear rocking hub on the ten original compositions contained on Relentless, the group’s second album.

The trio recorded Relentless utilizing the “old school” method of having the artists “jamming” together in the recording studio; playing off each other’s ideas and improvised musical chemistry to construct songs from the foundation up. This effort of true teamwork involves finding patterns that fit together then building upon that. The result is an organic and engaging release. All three band members share song compositional credit with lyrics credited to Paul DeLauriers and Alex McElcheran. Relentless is crammed with PDB’s distinctively fine sharpened arrangements and impassioned musicianship, rendering formidable songs that, by some means, sound both old and new simultaneously.

The release begins muscularly with “Stewtro Rock (Just Got Back)” with the heavy pounding rhythm section of Harrisson and Morency creating a bedrock for DesLauriers to build on with plenty of chunky guitar power chords and practiced distorted riffing. Paul’s vocals are a howlin’, growlin’ raspy delight; to my ears quite reminiscent of the full-throated roar of Leslie West. To me, the lyrics such as “no more driving blind, no more troubled mind” suggest a man who has searched and found mental clarity in his life. This opening song is a thunderous blend of blues and “kick ass” rock and roll that will undeniably wake you up.

“I’m Your Man” follows and is an insistent boogie that is instantly catchy. Paul shows versatility with a coarse aged timbre vocal as Morency and Harrisson maintain a steady groove while Paul drifts into his own world of meaty guitar solos. The group always plays tight with each other, and this song is a prime example.

Featuring an up-front beat that makes you want to hit the dance floor, “Ten Feet Tall” is full of enough memorable pronounced hooks to snag a prized deep-sea marlin. The booming and pulsating work of the bass guitar and drums merge to vibrate the spinal column when played at high volume, but never stoop to thrashing quality. The lyrics speak of standard relationship questions, but the song’s main focus centers on punchy melody, tasty guitar fills, and clever rhythm section embellishments.

My favorite song on Relentless, “We Just Might,” gets underway with an early Stray Cats feel and contains a nibble of cowbell along the ride. The tune really kicks into over-drive midway through with some blistering guitar leads peeled off that lurch ever forward like a rocketing locomotive about to jump the tracks. When Paul demands “give me more, give me more,” I feel the exact same way — I just can’t get enough of this track. The successful symbiosis the group displays really seals the deal on this rousing rocker.

The bluesy “Still Under My Skin” showcases some of the finest guitar work on the release and the crafty bass guitar work from Morency battles right alongside for a slice of the spotlight. Paul’s guitar tone is big and semi-clean with some slight distortion for a bit of blues grit. He shows off his speed merchant skill on guitar and this stretched-out song length provides both the bass and drums an ample opportunity to fill out the space; which they admirably do.

The slow-blues prowl of the eight and one-half minute “If I Still Had You” is another highlight of the album. This cadence change from the mid to up-tempo styles prevailing on the remainder of the content of Relentless provides a pleasing contrast. Besides, who doesn’t appreciate a well-executed slow blues expression? The lyrics clearly relate a despairing lament bemoaning what could have been.

“Wipes Away Your Sin” is a winning mid-tempo tune that hits full stride after some beginning sing/spoken vocals with Harrisson pounding the drum skins like they were a tough piece of meat. “Up In The Air” contains keen bottle-neck slide guitar and a soul/blues/funk vocal that holds an uplifting property.

“I think inside every song there are other songs. But I also think, inside your voice, there are other voices that you have yet to discover and that’s kind of why you are here.”  ~ Tom Waits