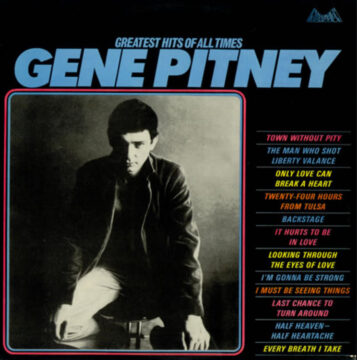 There are half a dozen or so great white singers in rock/pop music, among them Elvis, Roy Orbison, Robert Plant, Boz Scaggs and who else? The list dwindles quickly. Now if we‘re talking black singers, there‘s no shortage of truly wonderful voices: Sam Cooke, Ray Charles, Marvin Gaye, Little Anthony, Isaac Hayes, Al Green, Otis Redding, Solomon Burke, etc., etc. But most white guys? I‘m talking about singers who could move you to tears, who had true artistry in their performances, who inspired others, who could get girls to kiss you, and more.

In other words, I‘m talking about Gene Pitney. Now there was a white guy who could sing. So much so that among his peers he was known as “The Voice”. For my money Gene Pitney is one of the most underrated figures in all of popular music, for while he had a loyal fan following for over forty years, he stopped having hits for the most part once the Sixties were over. But for a period of time, from around 1959 to 1966, he was one of the greats.

They still play his stuff on the oldies radio stations, songs like “Only Love Can Break A Heart”, as well as “Twenty-Four Hours From Tulsa”, which is one of the great Lost Highway tunes of all time. It‘s my theory that Hal David and Burt Bacharach, who co-wrote the song, stole the idea for “Tulsa” from Marty Robbins‘ “El Paso” – they‘re both cowboy songs about losing one‘s heart and one‘s life to a bar girl. One chance meeting and the guy “can never go home again.” Gene does it justice. But Gene‘s greatest achievement is one of his earliest, and it‘s the tune he recorded for Phil Spector when Phil was developing his Wall of Sound technique.

Actually, there‘s a wonderful book to be written someday just by picking two or three dozen Phil Spector productions: “little symphonies for the kids” he called his pop masterpieces. The thing is, as crazy as Phil became later, he wasn‘t crazy then. He was a genius and he knew it. And he recorded one of his blockbusters when he brought Gene Pitney into his studio in June and July of 1961. The world wasn‘t quite ready for this particular two minute symphony. The song reached number 42 on the Billboard charts and disappeared. The song impressed Sting enough that he rewrote it years later and called it “Every Breath You Take”, but it‘s a far better song when sung by Gene. The lyrics Gene sang were written by a young Gerry Goffin – Carole King team, and are a mastery of ironic understatement.

“You never hear me say a prayer
Of thanks to someone way up there
Who gave me such a lucky break
Oh no, darling, only with every breath I take”

The Wall of Sound hits the listener hard. Every great Phil Spector song packs a wallop and this one is the early prototype for all that followed: a huge bass drum that is the mother of all bass drums, a back-up doo-wop chorus, soaring, swooping violins that made you forget electric guitars were ever invented, and a conscious building of the song with movements, movements that told an educated listener that Phil really did know something about classical music. He wasn‘t kidding when he called his work “little symphonies”.

“Every Breath I Take” threatens to collapse under the weight of its own intentions: it‘s a feverish expression of the inexpressible devotion our young lover feels, a prayer, an incantation that says “I never worry how my heart will break; oh no, darling, only with every breath I take”.

After this spectacular disappointment on the charts, Gene went on to become the chosen singer for the title track of the movie Town Without Pity. It’s a shimmering masterpiece of vocal perfection that is the equal of anything made by Presley or Orbison at the time, and has been covered dozens of times since, but never so well as Gene’s version.

He was the chosen voice for several Hal David/Burt Bacharach compositions, until Hal and Burt decided the public wanted to hear women such as Dusty Springfield. They chose as their new singer Dionne Warwick,  and they cut Gene loose to work on his own. Gene turned out to be a fine songwriter who wrote “Hello Marylou” for Ricky Nelson, and “He‘s A Rebel” for the Crystals; he also collaborated with George Jones on two country albums in 1965, long before such a thing was fashionable.

He also made another album with Jones’ regular duet partner, Melba Montgomery — impressive for a kid from Connecticut. Like most pop vocalists, Pitney had a hard time making records commensurate with his talent and, by the mid-1970s, he’d stopped trying. This might have been the end of his popular acclaim but for British singer Marc Almond, whose 1988 duet with Pitney, “Something’s Got A Hold Of My Heart,” became a became a number one UK hit — 21 years after Pitney’s previous version went to #5.

I saw him perform in Vancouver late in his career, and he was still in great voice. He travelled around the world with a musical director who hired out musicians from local symphony orchestras. He was touring when he died in a hotel in Cardiff, Wales, in 2006 where he had performed that night to a sold-out crowd. His singing that night by all reports was terrific; he went upstairs to his room after the concert, fell asleep, and never woke up. He was sixty-six years old, a touring professional still in love with music,  one who continues to be loved by thousand of adoring, somewhat aging fans. Count this writer among them.