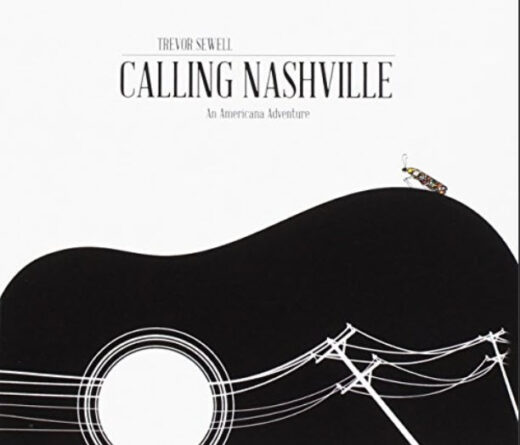 Trevor Sewell hails from North East England and he is a multi-award winning composer, musician, engineer, and record producer; garnering awards in both the UK and USA. He began his career as a session musician, but has now recorded six solo releases, as per his website, since his EP debut in 2010.

Trevor Sewell’s outstanding release in 2017 was entitled Calling Nashville – An Americana Adventure, and it is wonderful in every possible way. It is a record crafted with integrity, ingenuity, and love by everyone involved and produced by Geoff Wilbourn. A few very noteworthy guests contribute to make Calling Nashville a most powerful record, to say the least. The two that really stand out are Tracy Nelson and Janis Ian. Both ladies are world-class singers and fine keyboard artists, but only Ian plays the keys here on two songs.

“It was a truly amazing experience working with the Nashville musicians. They are all really top drawer. I’ve been a big fan of both Janis and Tracy since the 70’s. Geoff Wilbourn, who has worked with the likes of Johnny Winter, David Honeyboy Edwards and Robben Ford, really pulled the whole thing together.” ~ Trevor Sewell

The opening track, “Some Day,” shows Trevor rocking on some searing electric guitar. Kellen Michael Wenrich provides violin sparks as he plays with the fierceness of the Devil playing on his fiddle of gold. Wenrich employs varying styles that are a blend of Papa John Creach (Hot Tuna, Jefferson Airplane, Jefferson Starship), Jerry Goodman (The Flock, Mahavishnu Orchestra, Dixie Dregs): and most closely on this song a heavy tinge of country music similar to Mark O’Connor. Sewell exploits a grit filled lead vocal treatment, and the background singers are divine in their repeated chanting of the words “Some Day” in the chorus. The lyrics are crucial to the composition, as they are on the entire album. The essence can be distilled into the humanitarian principle sometimes known as the golden rule: “We got to treat each other right.” The optimistic sermon he proclaims hits home hard, and hopefully, like the lyrics state “Someday we’re gonna start again; and treat each other right.”

The second song is the peaceful “Mountain of Gold.” On a previous Sewell EP he covered three Dire Straits songs. He is ever adept at bringing a soul-touching beauty to a song by his vocal and guitar that, at times, reminds me greatly of Mark Knopfler. “Mountains Of Gold” is parallel to Knopfler’s “Brothers In Arms” and displays his lyrical weightiness. The love song is sung with some whispered sing/speak that excellently draws the listener in. The lyrics are melancholy genius as evidenced by the chorus of “We are just ships in the night, with no means of navigation, no chart, no stars, no guiding light.” “We must learn to trust each other through the troubled times, or sink without trace beneath the tides.” “If I showed you the colours of my dreams and laid them out in front of you. If I tried until the day I died, I could never be the way you want me to.” The regret shown in Trevor’s vocals is palpable, and a purely beautiful thing. The background singers softly croon “mountain of gold” poignantly to add a dreamy texture.

“I’ve been a big fan of Trevor’s work ever since hearing his Hollow album, so meeting him earlier this year was a real treat. I offered to play on his next record but wasn’t sure if he’d take me up on it- fortunately, he did.” ~ Janis Ian

The crystal clear vocal charms of Janis Ian are featured in a vocal duet with Sewell’s smoky grit on the reimagined “Fade to Grey.” The song first appeared in 2013 on Trevor Sewell’s Independence release in a shorter and darker version with harmonica accompaniment. That release, in Trevor’s words, “was a heavily Blues flavoured album” and the album won some major awards. This version of the song with Janis Ian contributing lovely piano was released as a single and stretches out more than seven minutes. The jazzy guitar is tastefully restrained, and the stand-up bass thumping from Sean O’Bryan is sturdy as an oak tree. The presentation has the atmosphere of a late-night jazz club, with nice brush pattern drum technique and occasional light wood block percussion coming from Trevor Brewis, and a light scat from Ian.

The rhythm section cuts a groove as deep as the Colorado River burrowed into the Grand Canyon on “Matter of Time.” A slide guitar intro rises above the groove as Sewell employs a similar vocal to Knopfler again: but this time the tempo of the song is simmering just below a full-boil. Midway through the guitar interactions between the lead and slide prove rousingly supple and if your head isn’t bobbin’ and your toes aren’t a-tappin’ then you simply don’t have a pulse. Female singer Mia Moravis adds further clout when she makes her vital appearance. The magnetic refrain of “It really doesn’t matter, it’s just a matter of time” says it all much like the wisdom of a sage.

The rootsy authentic and magnificent blues vocals of Tracy Nelson (Mother Earth) are utilized on the song “Long Time Ago.” Tim McDonald provides some excellent Hammond B-3 organ, alongside Jan Ian’s piano to add to the song’s sway. Trevor Sewell’ s guitar lead is simple, yet elegant and his vocal fits perfectly beside Nelson. The drums of Trevor Brewis are mixed up front in the production to fine effect. As usual, there are outstanding lyrics to complement the masterful vocals and melody. Some examples follow: “I remember each detail as if we just met. Things were so different I knew you loved me and yet.” And  “We all do some things we would rather forget and I should know, – but that was a long time ago.”  “Seasons may change, as the rivers run cold – nobody knows what the future may hold. So spare me a thought for a soul that was sold – a long time ago”.

The retro-early rock feel of “Rock Around The Clock” is found on “You Ain’t What I’m Looking For.” Sewell delivers some searing guitar work and his gruff vocal sounds wholly honest and primarily unvarnished. The bass guitar steps mightily, and the background vocalists join in the song’s refrain.

The mid-tempo “Tear It Down” is a lovely song that features some violin, as does the song that follows titled “Stand Next to Him.” Sewell adds some mandolin to give the song a Nashville influence and he repeatedly coolly sings “you can’t win, when you stand next to him.”

A slow love ballad entitled “The Way You Are” contains lyrics that describe the bitter pain of lonesome heartbreak. Sewell’s sophisticated guitar is tasteful and, as usual, highly pleasing.

The closer “Shadows” features Janis Ian on gentle plaintive piano and Trevor softly singing the inspirational affirmation of life lyrics. “The sky was dark, I was afraid, I could not see. So you saw for me, you touched my hand and I was saved, you chased the shadows away.”

The combination of musical elements contained on Calling Nashville works so very well that it transcends any words to describe how good this album makes you feel inside. If instead of Calling Nashville, the metaphor of Calling Las Vegas were used, it would be the equivalent of hitting a massive jackpot on a slot machine. The album flows magnificently from song to song. To paraphrase Thomas Moore “Flow, like the dews of the love-breathing night, from the warmth of the sun that has set.”

“The album happened quite quickly, and it has a nice spontaneous vibe to it.” ~ Trevor Sewell

Kudos to the producer Geoff Wilbourn, and to the peerless engineers involved in making this recording at Sound Emporium Studios in Nashville, Tennessee. The background singers also deserve acclaim for a project warmly done. They include Janis Ian, Tracy Nelson, Nashville’s Vickie Carrico, Mia Moravis, Chris McCartie, and Trevor Brewis. Trevor Sewell and his guests create an incredibly well-composed and well-arranged album for the ages.