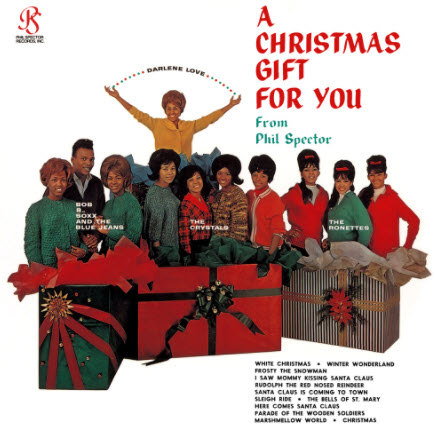 Darlene Love “Christmas (Baby Please Come Home) ~ Way back in 1963, the boy wonder genius producer Phil Spector gathered the top artists under his wing to make a very special Christmas record. He called it A Christmas Gift For You. Four of the tracks were sung by Darlene, one of the great rock/pop vocalists of all time. The track we’ve chosen is typical Spector – almost too glorious for words.

Elvis Presley ” Blue Christmas” ~ This song makes our classic playlist for too many reasons to list. The King owns this masterpiece employing his trademark quivering vocal that made the ladies knees buckle and hearts flutter. The background singers softly cooing ooh, ooh, ooh, and ahh, ahh, ahh frame him perfectly. Exquisitely fits this 2020 where loved ones may be apart during Covid lockdown.

Roy Orbison “Pretty Paper” ~ Written as a country song by Willie Nelson, Roy Orbison brought an understated approach of tenderness to the story of a down and out street merchant who offers up wrapping paper and colored pencils to the busy shoppers rushing by. The song is a beautiful reminder to think of others less fortunate, and that holidays for some are the most difficult times of all.

The Beach Boys “The Man With All The Toys” ~ Brian Wilson and Mike Love co-wrote this little ditty in 1964. If features signature harmonies and Carl Wilson hitting those high notes like a choir boy. It’s so short, it’s over before you realize, as they keep you longing for more.

Dean Martin “Silver Bells” ~ Dean Martin passed away on Christmas Day twenty-five years ago. He was thought by his peers to be the most talented man in show business. A singer who could really act. An actor who could really sing. We’ve chosen the ultimate feel-good Christmas song and Dean delivers it with indelible light-heartedness. Something in this man’s voice makes people happy. Then, now, and forever.

Eartha Kitt “Santa Baby” ~ This recording was the best selling Christmas song of 1953, and it’s made the charts almost every decade since in countries around the world. It’s been called the best and the worst Christmas tune ever produced. It’s been praised, parodied and damned – all because Eartha’s performance is sexy beyond belief. Too much so for 1953, and in some quarters, too much so even now. We happen to love it.

Art Garfunkel “O Come All Ye Faithful” ~ The master balladeer sings this traditional song as though he were one of God’s angels. It was Art’s contribution to Columbia’s Acoustic Christmas, a truly wonderful project. Guaranteed to lift your spirits with this thrilling heart-touching performance.

Bruce Springsteen “Merry Christmas Baby” ~ The Boss and his cohorts in the E- Street Band all shine like the Star of Bethlehem. Bruce’s soulful growl, Clarence’s sax and Max’s drum beat make this a simmering Christmastime love song. So infectious, so masterful, just so very nice. In our opinion, one of the top two standout tracks on A Very Special Christmas, Vol. 1. to benefit The Special Olympics.

Eurythmics “Winter Wonderland” ~ Annie Lennox exudes style, strength and sexuality, qualities not normally associated with Christmas. Here she turns a quiet, simple tune into something with a relentless electronic backbeat and some inspired multi-tracking harmonies. Sounds as fresh and invigorating today as in 1987 when it was released.

John Lennon “Happy Xmas (The War Is Over)” ~ John and Yoko assembled a fine group of musicians under the production of Phil Spector with his Wall of Sound strings. An array of acoustic guitars, a choir led by Yoko, bells, and more complement a beautiful Lennon vocal on a song that gets much airplay this time of year; and it’s one we at Vivascene deem a holiday classic.

Hall & Oates “Jingle Bell Rock” ~ This duo has outsold every other duo in the history of pop music. Their brand of Philadelphia soul permeates this Christmas classic. The Les Paul-inspired guitar licks add to the fun.

Bob Seger “Little Drummer Boy” ~ The distinctive, semi-raspy, soul-filled vocal of Bob Seger is a match made in Heaven on this familiar Christmas classic. His enunciation, his phrasing, and his reverence focus the attention on the song’s lyrics and the message therein. The other elements of guitar, choir, etc. are all garnishes to the powerful Holy Spirit Bob Seger furnishes to make his the ultimate version.

Carpenters “Have Yourself A Merry Little Christmas” ~ It’s hard to believe that Karen Carpenter passed away almost 40 years ago, and equally hard to comprehend the vast gulf between her talent and her illness. Most people have probably forgotten that she was more than a great singer; she was also a talented drummer. It was her velvet voice, though, that brought her fans from every age group and musical genre. This performance from their 1978 Christmas Portrait album reveals the exquisite perfection she brought to every recording she ever made.

The Beach Boys “Little Saint Nick” ~ Originally released as a single in 1963 and attached to The Christmas Album the following year, this classic combines the hot-rod and surf music elements the group pioneered to perfection. It’s a jaunty treat that tells the tale of Santa’s souped-up sleigh with the lead vocal by Mike Love. Harmonies are superbly attached and the coda makes for an earworm tough to shake. Ooooh Merry Christmas Saint Nick, (“Christmas comes this time each year”). We love it!

Elton John “White Christmas” ~ For anyone who thinks Sir Elton’s music has been overexposed, we urge them to consider this powerful duet with a surprising vocal partner, whose name is not usually connected with singing. This performance is taken from a 1999 album entitled A Rosie Christmas. It’s proof positive that Elton could make a great recording with anyone.