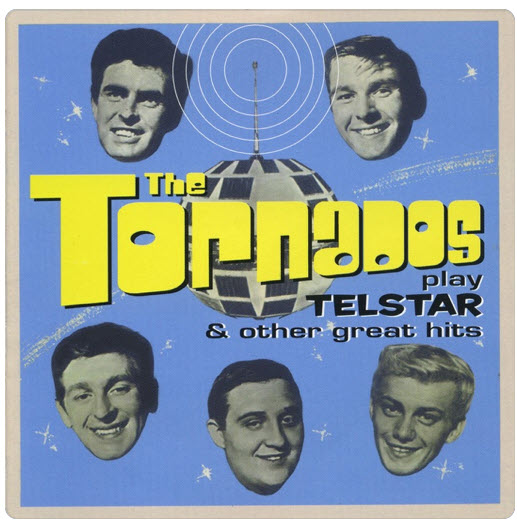 The Tornados  “Telstar” ~ The 1962 instrumental is said to be the first song by a British group to top the charts in the USA. The song was named for an experimental telecommunications satellite launched into space in 1962. The melody was written by Joe Meek and produced on the clavioline, a forerunner to the synthesizer. The song was covered by both The Ventures and The Shadows. Truly a historic song.

Jimmy Soul “If You Wanna Be Happy” ~ A #1 record in 1963, the song is based on a Trinidad calypso song from 1934. A classic song that gives solid advice to steer clear of marrying a pretty girl; especially if you’re afraid of her stepping out with other guys. It’s a fun sing-along type song that contains a brief nod to Bo Diddley’s “Say Man” with a spoken dialogue near the end … “yeah, she’s ugly, but she sure can cook.”

Gale Garnett “We’ll Sing In The Sunshine” ~ Gale Garnett was born in New Zealand and moved, along with her family, to Canada when she was eleven years old. Her big hit (gold record status) came in 1964 and won the 1965 Grammy for Best Folk Recording. Her original composition was #1 on the Contemporary Adult singles charts for 7 weeks and also cracked the Country Top 50.

The McCoys  “Hang On Sloopy” ~ The McCoys were a group that scored a #1 hit on the Billboard Charts in 1965 with ‘Hang On Sloopy.’  The group formed in Union City, Indiana in 1962 (A town straddling the Indiana/Ohio border). Founders Rick Derringer (Zehringer) guitar and vocals, and Randy Z (Zehringer) drums, were actually born in Ohio.  Bassist Randy Jo Hobbs later went on to play in bands with both Johnny Winter and Edgar Winter along with the Zehringer brothers. Ronnie Brandon and Saxophonist Sean Michaels were the other membesr.

The track is glorious, raw and silly with Derringer selling the chorus with his over-the-top holler. The song rumbles along giddily and is a true fun song.

The New Vaudeville Band “Winchester Cathedral” ~ A novelty song that was a throwback to the Rudy Vallee days featuring a megaphone vocal. It went to #1 in the USA in 1966 and won the Grammy for Best Contemporary Song in 1967. The song’s composer was Geoff Stephens, who would also write “There’s a Kind Of Hush” which became a hit for Herman’s Hermits in 1967.

The Amboy Dukes  “Journey to the Center of the Mind” ~  The Amboy Dukes one hit came on their 2nd release “Journey to the Center of the Mind” in 1968. Ted updated in 2007 on his “Love Grenade” solo with an up-tempo treatment. “Take a ride to the land inside of you mind.” And “it’s a land where fantasy is fact” paint some mind pictures. And it’s true; Ted Nugent has never experimented with mind altering substances.

Mary Hopkin “Those Were The Days” ~ Welsh born Mary Hopkin was one of the first signings to the Apple  Record label. Her debut “Those Were The Days” was produced by Paul McCartney and became an international hit in 1968. Paul said: “I thought it was very catchy, it had something, it was a good treatment of nostalgia.” It’s a twist on an old Russian song that promotes romantic ideals about the good old days of youth including drinking, dancing and singing.

Mason Williams “Classical Gas”  ~ The 1968 instrumental song was composed by Mason Williams and recorded with backing from members of the “Wrecking Crew.” The song won 1969 Grammys for Best Instrumental Composition, Best Pop Instrumental Performance, and Best Arrangement, Instrumental. Williams was head writer for the Smothers Brothers Comedy Hour at the time of the song’s release and premiered it on the show. Mason Williams also is an Emmy winning comedy writer, stand-up comedian, an author, and a poet.

Blue Cheer “Summertime Blues” ~  The 1958 teenage anthem of Eddie Cochran was reimagined by the 3 piece group named for their favourite brand of LSD. In 1968 Blue Cheer hit the charts with the song that many claim to be the first Heavy Metal song. Blue Cheer was excessive in every way possible; long hair, maximum volume levels, Hells Angels ties, and their anti-establishment stance. They unabashedly played with their stacks of Marshall amps turned up to generate ear bleeding jet airplane effect.

Brooklyn Bridge “It’s The Worst That Could Happen” ~  When Johnny Maestro (former lead singer of the Crests) put together an eleven piece group his management advised him it would be easier to sell the Brooklyn Bridge than promote the large ensemble. They hit major paydirt in 1969 with their million selling version of legendary songwriter Jimmy Webb’s heartache song about a former girlfriend getting married to another.

The Scottish Band Marmalade in 1969/1970 scored a global hit with “Reflections of My Life”, a song co-written by guitarist Junior Campbell and lead singer Dean Ford. The song featured a strong lead vocal, great harmonies and a brief guitar solo that was partially achieved on a reversed tape. The lyrics speak of a yearning to return to an earlier time; accompanied by sweeping strings that give a sense of grandeur.

Elvin Bishop “Fooled Around and Fell In Love”  ~ Elvin Bishop is a two time member of the Rock and Roll Hall of Fame; inducted in 2015 as an original member of the Paul Butterfield Blues Band and in 2016 on his own. His hit came in 1976 with Mickey Thomas singing the lead vocal. The song was included on the hugely popular soundtrack for Guardians of the Galaxy.

Dexy’s Midnight Runners “ Come On Eileen”  ~ DMR formed in Birmingham, England in 1978 as a 9-piece New Wave Soul band; they quickly earned a reputation playing soul covers. After garnering success in England with singles, they were reduced to only sole surviving original founder Kevin Roland. His idea to add strings and a gyspy-like appearance led to the fiddle led Come On Eileen which cracked the USA top twenty as the video garnered heavy rotation on MTV.

Bobby Caldwell “What You Won’t Do For Love” ~  Bobby Caldwell had a big hit in 1978 with the title track of his debut album. It was a crossover hit, charting on the Billboard Hot 100, the Hot Selling Soul Singles, and the Easy Listening chart. It’s a fine example of blue-eyed soul that still garners airplay on the radio.

Soft Cell “Tainted Love” ~ This was originally recorded by Gloria Jones and released in 1965. British synch-pop duo Soft Cell reworked the song, slowing it down and creating a techno pop gem in 1981 using synthesizers and rhythm machines to pair with a biting Marc Almond vocal. The 12″ single dance version paired it with a transition into the Supreme’s hit which added another deeper dimension. The song got its start in dance clubs before moving to radio where it spent a then-record 43 weeks in The Billboard Top 100.

Jan Hammer “ Theme from Miami Vice” ~ Czech-born Jan Hammer is best known for being in the Jazz-fusion groups Mahavishnu Orchestra and Schon Hammer. Hammer left Prague in 1968 after the Soviet Union invasion and received a scholarship to Berklee. The one minute rat-a-tat blast that opened the Miami Vice show each week was fleshed out to three minutes for the Soundtrack album and, as such, is a full on assault to the senses. It was released as a single in 1985.