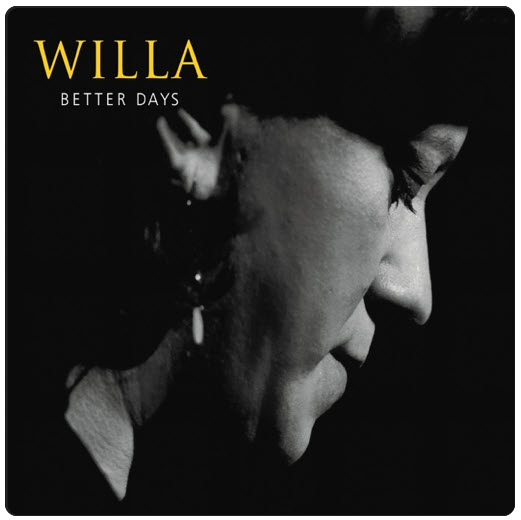 The profoundly talented singer/songwriter Willa Vincitore (formerly McCarthy) steps out of the shadows and commands attention that establishes without a doubt that this is her time to bask in the sun. Her voice can be soft as a kitten’s purr, or at times she can claw at you like a big cat. Her songwriting ability doesn’t take a back seat to her singing, as all ten compositions on Better Days are penned by Willa on this stunning debut.

Produced by acclaimed drummer Lee Falco, the musicians assembled are strong as The Old Testament’s Sampson with his long flowing hair. Falco expertly administers his drum duties, Brandon Morrison cuts loose on the bass guitar, and Chris Vitarello is simply exquisite on guitar. Both Falco and Morrison fruitfully toured a while back with Steely Dan legendary performer Donald Fagen throughout his Donald Fagen and the Nightflyers global expedition. Wily veteran Jay Collins executes the essential task of horn arrangement, and plays various saxophones. Reggie Pittman, a Cleveland native (who now operates out of NYC) has vast areas of expertise performing, producing, composing, arranging as well as teaching. Pittman on trumpet and flugelhorn completes this impeccable horn section.

“She’s my favorite person in the whole world to sing with.” ~ Chris O’Leary

All the songs on Better Days are solid candidates for my favorite song, but two in particular really stand out to me. The first of those is the title track. On “Better Days” Vitarello pulls out some Curtis Mayfield retro-guitar that brings back great memories for me. The horns are funkily honkin’ and the lyrics are just right. Her vocal treatment on this song just gets me higher than the moon and really hits home. It is my working definition of a fluid ensemble performance. Great song!

“For me, Better Days captures the slice in time when I was reckoning with the end of my first marriage, the celebration of new and unexpected love, and the complications that emerged during the journey. “Crazy Man” was clearly fleshing out the former, but also reflected the raw blues-rock vibe I was into at the time. I’m heading into the studio next month to record the next collection of original material and while I feel the tunes are evolved and a bit more nuanced, there are still going to be a couple of rip your face off blues rock tunes.” ~ Willa Vincitore

The other top favorite for me is “Crazy Man.” It is representative of all of the songs on the album, as Willa strappingly struts some of her bluesy soulful singing. Her vocals are heart wrenchingly powerful. Add in a nicely solid rhythm section, in tandem with the sterling ultra-fine fiery fierce guitar picking by Vitarello and mighty fine funky horn accents, the combination is just to die for. In addition, smart lyrics tie everything together into an amazing package.

“Guitarist Chris Vitarello, whose axe is sharp enough to split girders in two, as well as raise hairs on the back of the neck” ~ Anthony Wilson, All About Jazz

Another dynamite track is the opening track “Love Looks Good On Me” . The tune is a rolling blues gallop with Willa’s vocal controlling the reins. The horn-work and tasteful guitar add spicy goodness to the blissful tune that ends with a gospel vibe.  Better Days is easily one of the top releases of 2017 and as the American Contemporary Jazz singing icon Dianne Reeves sang in her song also titled “Better Days”:

“She said all the things you ask, you will know someday. But you have got to live in a patient way. God put us here by fate, and by fate that means better days.”

Our Heavenly Father has truly blessed Willa Vincitore, and on Better Days she blesses all of us. To sum it up, Willa Vincitore is a dynamite vocalist and songwriter. The familiarity of Willa with Chris O’Leary and Chris Vitarello facilitates her attaining her extreme comfort zone on this release. She has honed her vocal skill to the razor’s edge. She sings her words with acutely skilled exactness: much like an artist uses pigments – vowels are, at times, primary colors with the impacting result being indescribable.  I don’t know how long she was working on the writing and perfecting of these wonderful songs on Better Days, but I do know that it was time extremely well spent.