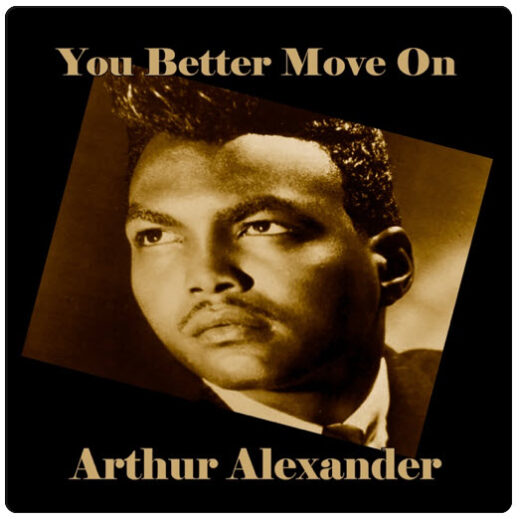 Arthur Alexander‘s magnificent debut album back in 1961 marked the beginning of Muscle Shoals’ musical importance. You Better Move On was the perfect union of soul, blues, and country. Arthur’s songs, his recordings, and  while his impassioned performances aren’t generally known by most  of present-day music fans, his influences were considerable among his peers. His songs have been covered by The Rolling Stones, The Beatles, Elvis Presley, Bob Dylan, John Print, Ry Cooder,  Tina Turner, Mink DeVille and Elvis Costello, among many others.

“If The Beatles ever wanted a sound it was R & B. That’s what we used to listen to and what we wanted to be like. Black, that was basically it. Arthur Alexander.” ~ Paul McCartney

“When The Beatles and The Stones got their first chances to record, one did “Anna”, the other did “You Better Move On”. That should tell you enough.” ~ Keith Richards.

Arthur’s voice and sound were commanding, both on record and in person. His delivery was laid back , yet infused with a heartache that he was willing to confide to the listener. Replete with emotion, his vocals were supported by superb session musicians such as Norbert Putnam on bass, David Briggs on piano, Boots Randolph on saxophone, and Charlie McCoy on harmonica. Together they achieved a synthesis of soul and country that has characterized the music of Muscle Shoals ever since.

As a young teenager Arthur formed a group called The Heartstrings , and displayed a singing talent reminiscent of his early idols Percy Mayfield, Clyde McPhatter, and The Drifters. Like them, he was capable of more than slow crooning though. His first efforts for the Judd label in Sheffield, Alabama yielded a couple of blues-rock shouters such as “Sally Sue Brown”, covered a few decades later by Bob Dylan on his album Down in the Groove. But it was the soul country sound that became his destiny and his legacy. That sound  was fully formed on his first full outing and made an immediate impact upon performers in several genres, from blues to pop to country.

Arthur’s debut album was recorded in over several months in 1962. The title track became the first national hit recorded in Alabama, reaching number 24 on the U.S. charts. This track begins with a slow and steady beat, followed by a bass line that echoes songs such as Ben E. King’s “Stand By Me” and the Drifters classic “Save The Last Dance For Me”. The storyline is typical of Arthur’s lyrical output: a man addresses his rival and begs him not to steal his girl. It’s worth noting that The Stones youthful cover of his tune in 1964 is what got them started. The song was an instant classic, and remains an emotional experience even today.

Key tracks on this killer album include “Anna (Go to Him)”, “Soldier of Love” and “Burnin’ Love” (the last being the tune Elvis covered).  It’s worth stating that Arthur never made a bad record, but there are compilations of his work that don’t show him at his best. There are a few versions of “You Better Move On” where the backing and arrangements come to the forefront in a misguided attempt to move the track away from soulsville into the middle of the road. Best to stick to the original singles version.

Tracks on other albums worth seeking out: “Go Home Girl”, which was notably covered by Ry Cooder on his Bop Till You Drop outing, and “Dream Girl”, a lovely track filled with hope and longing.

Arthur’s star burned brightly in R& B circles for a decade or so, but the mid ’70s found him without a record deal, and at the wrong end of publishing royalties from his compositions. He quit the music business and went work as a bus driver for several years.  When he was inducted into the Alabama Music Hall of Fame in 1990, renewed interest prompted him to start touring again.

In 1993 he issued a new album for the first time in more than twenty years. True to form the recording was titled Lonely Just Like Me. Shortly after it was released he suffered a fatal  heart attack while on tour. He was 53 years old.