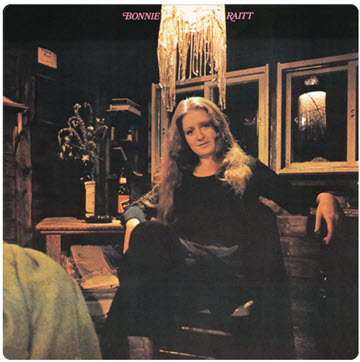 She’s been called the best slide guitar player alive today. She’s been hailed as one of the top 25 blues artists of the past fifty years and she’s still going strong today. Folk singer, blues/roots performer, rock and roller, ballad weeper: Bonnie Raitt has seen it all and done it all. She put out several great records in the 1970s and became a critic’s darling (this means, folks, she barely sold any albums at all). She fell in and out of alcoholism as well as drug abuse and then resurrected herself with political activism and a series of stunning albums beginning with Nick of Time in 1989 which she has called “my first sober album”.

She has received ten Grammy Awards. She is also listed as number 50 in Rolling Stone magazine’s list of the 100 Greatest Singers of All Time and number 89 on their list of the 100 Greatest Guitarists of All Time. In a few weeks time (on November 8th) she will be 64 years old. She was twenty-one when she released her first record in 1971. It was a rather quiet affair, considering her musical heritage, but Bonnie was going her own way: the way of the blues. In retrospect, her first album showed us everything she was going to be. We, the record-buying audience, were damned slow on the uptake.

Bonnie was born into one of the most eminent musical households in America: her father was the famous Broadway singer/actor John Raitt, who had starred as the original Billy Bigelow in Rodgers & Hammerstein’s Carousel and as Curly in Oklahama!. Her mother, Marjorie Haydock, was an accomplished pianist. The marriage didn’t last. John Raitt went on to bigger fame as the singer of the hit ballad ‘Hey There’ from the perennially revived The Pyjama Game. He possessed both extraordinary good looks and a smashing baritone that stayed on the beat, as Broadway material is wont to do. He had a voice that lasted and it led him to perform with his daughter Bonnie in his later years. His final recording, John Raitt Broadway Legend, earned him a 1996 Grammy Award nomination for Best Traditional Pop Vocal.

Their vocal styles couldn’t have been farther apart: she constantly plays with the beat, and is capable of delivering nasty blues as well as shimmering tearjerkers whereas her father was kind of a square singer, the kind in which Broadway revels. What they had in common was talent: loads of musical talent that has always been evident, even when Bonnie indulged in substances that, well, loosened her performances. Blues became the most natural thing in the world for her. She had to fight her way back to sobriety and to straight singing.

“I was always drawn to the blues. Alberta Hunter at the Cookery was a life-changing experience. I only wanted to get enriched as a performer as I got older, to have an audience which got older, too, and would come to see me when I’m 80. And I didn’t have a legit trained voice. My love was Bob Dylan. But as I got older I realized a good ballad was a good ballad.” ~ Bonnie Raitt

Which brings us back to 1971 and Bonnie’s first record. Bonnie grew up in California in a Quaker household, but graduated from Oakwood Friends School in Poughkeepsie, New York, in 1967. She entered Radcliffe College majoring in social relations and African studies. While there she became a serious fan of folk music, and of jug bands, particularly Jim Kweskin. She also fell in love with the music of blues artists such as Mississippi Fred McDowell and began a fierce regimen of practicing slide guitar. Remember, if you will, that at the time very few white women performed the blues, and almost no band employed a young white girl as a lead guitar player. White female folk singers were a dime a dozen, among them of course Mary Travers of Peter, Paul and Mary, the incomparable Joni Mitchell, the well-established Judy Collins and Joan Baez, and Sylvia Tyson who had split from her husband Ian. But the blues? No one, nada, considering that Janis Joplin had already passed on. Even Janis’s success was based primarily on the fact that her record sales came from Woodstock-type rock fans.

Bonnie Raitt had almost no choice but to forge a solo career. She was talented enough to open for McDowell in 1970 and came to the attention of Warner Brothers, who arranged to record her first record, “done live on four tracks because we wanted a more spontaneous and natural feeling in the music (Raitt wrote in the album’s liner note), “a feeling often sacrificed when the musicians know they can overdub their part on a separate track until it’s perfect.”

The opening track ‘Bluebird’ was written by Stephen Stills and released by him as a member of Buffalo Springfield in the mid 1960s. Stills performed it as a dazzling folk-rocker that emphasized his virtuoso guitar playing and his penchant for suite-like construction that proved the foundation of Crosby, Stills and Hash (pun intended). It was a mesmerizing tune in the original arrangement that included banjo, psychedelics and extensive noodling, but Bonnie had a different vision of the track and delivered something startling – something deliberately low-key, with no guitar solo, but with a funky New Orleans beat supplemented with some terrific sax playing.

Stills (and the rest of us) probably didn’t recognize what Bonnie had come up with, but it was Americana in every way. There was nothing else like it until Maria Muldaur came along and released ‘Midnight At The Oasis’ a couple of years later. The most compelling fact about Raitt’s version of ‘Bluebird’ is how she chose to downplay the guitar and the psychedelia- for she had already gained a reputation as a formidable bottleneck slide player by the time she was twenty – and focus on other aspects of the song, other possibilities. The track was an artistic success, and a commercial failure.

Other key tracks on the album are the two from the underrated female blues artist Sippie Wallace; Bonnie chose to close the album with Sippie’s ‘Women Be Wise’. It’s worth noting that the album is a eclectic mix from widely diverse songwriters. Bonnie even wrote a couple of the tracks herself. She assembled a cracking band, and even managed to attract Junior Wells to provide harmonica backing. Here is the entire track listing with songwriters:

So, what was the impact, the influence, and the legacy behind Bonnie’s first album? Manifold. Bonnie influenced and inspired many young women to become blues artists: I hear direct evidence of her catalogue in the works of Lucinda Williams, Susan Tedesch (a dead ringer in voice and guitar styling for the younger Bonnie), and many more, but particularly in her impact upon the career of Maria Muldaur and the creation of a lifelong “soul-sister” friendship between the two of them.

Maria Muldaur, in fact, credits her much younger friend Bonnie (Maria was born in 1943, Bonnie in 1949), with inspiring not only the impetus to make a solo record of her own, but also with providing the formula, if it can be called that, to combine blues, jug band, folk, pop, and New Orleans jazz influences into the mix we now call roots music. Famed bluesologist and interviewer Holger Petersen interviewed Bonnie and Maria together in May of 2010 and here’s what Maria had to say to Bonnie about seeing her for the first time in a 1972 performance:

“It was really watching you that night and hearing what you did and your command, not only of your instrument (your voice) but of the band and how you wanted it to sound. That you had the pluck to tell them exactly what you wanted to hear – that was just a revelation to me. It was the first thing that gave me the vision that such a thing might be possible…” ~Maria Muldaur

Bonnie’s subsequent albums in the 1970s are worth checking out as well, especially her second album Give It Up, which was dedicated to the people of North Vietnam and which is often referred to as her best work. For me, 1973’s Takin’ My Time, 1975’s Home Plate, and 1977’s Sweet Forgiveness (which contained her great remake of Del Shannon’s ‘Runaway’) are essential listening. Although she moved towards pop for a time, she never forgot her blues roots nor her connections with other blues musicians. On stage she has continued to blow away almost every performer she has ever collaborated with. Proof can be seen in the following vid, which was recorded at a tribute concert soon after the death of her close friend, Stevie Ray Vaughan.

Political activism also led her to the realization that black blues performers were being paid very little, both via songwriting royalties and in performance. She has dedicated herself to righting this wrong, ensuring that any performer who worked with her was well paid, and that those who needed health benefits and/or hospitalization were taken care of. She has also been instrumental in the work of the R & B Foundation, which has changed royalty policies, held Pioneer Awards shows, and given out hundreds of thousands of dollars in grants to blues artists in financial distress.