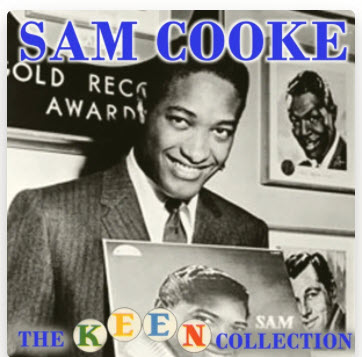 Sam Cooke was one of the finest singers who ever lived, and his loss to the music world in a tragic and senseless 1964 motel shooting remains one of the most talked-about and unsolved questions in America, rivaling the assassination theories behind the death of President Kennedy.

Grounded in gospel with the incomparable Soul Stirrers, the stunningly handsome Sam Cooke moved on to become a music legend and a pop artist who changed the course of music history with his legendary track ‘A Change Is Gonna Come’. Imitated but never equaled, influential beyond comparison, Cooke was the model for Jackie Wilson, Otis Redding, Brook Benton, Marvin Gaye and countless others.

What he is not generally given credit for, though, was his expansive foray into music of many genres: gospel, soul, jazz, pop, Broadway and the great American standards. This man could and did sing anything, with only one criterion in mind: musical excellence. The proof of that is in the new digital release of his early recordings in a ‘virtual boxset’ from ABKCO entitled The Complete Remastered Keen Collection.

This is an Essential set for anyone with an interest in soul music and in the artistic development of Sam Cooke, who should be heralded as the forerunner of Motown.

His 1957 Keen Records debut “You Send Me” was an astonishing achievement that could be well be the very first ‘soul’ recording, revealing as it did an ease of approach, an intimacy with the listener, and a vocal ability that united gospel, black and pop music in an unforgettable mix.

Sam was a natural recording artist who loved being in the studio, and was equally at home performing. Elegantly dressed, articulate and possessing an encyclopedic knowledge of gospel and standards, Sam was also a favorite with studio musicians who knew they were creating masterpieces at the Keen label whenever Sam was involved.

This new release is comprised of a virtual box set, (the equivalent of 3 CDs) containing Cooke’s complete Keen recordings as well as four of his originally released Keen LPs with multiple bonus tracks. As always, ABKCO assures the consumer the very best audio quality thanks to painstaking research that has yielded tracks from the original tape reels from which the Keen albums and singles were mastered in the late 1950s and early 1960s.

The three-volume compilation that offers the Sam Cooke aficionado the unique opportunity to download all of Cooke’s Keen album and single tracks for a comprehensive overview of his time at the label. The first volume of the set offers 23 tracks, 13 of which are the content of Cooke’s 1958 LP debut for Keen, simply titled Sam Cooke. The album’s other ten tracks are singles presented in mono as originally recorded and released. Beyond ‘You Send Me,’ the set includes ‘Summertime (Part 2),’ ‘Ain’t Misbehavin’,’ ‘That Lucky Old Sun,’ ‘(I Love You) For Sentimental Reasons,’ ‘You Were Made For Me,’ ‘Desire Me,’ and ‘Almost In Your Arms (Love Song From ‘Houseboat’).’

The second volume in the set includes the 1958 album Encore in its entirety, as well as all the tracks from Cooke’s 1959 salute to Billie Holiday, Tribute To A Lady, again, in mono as originally recorded and released. Among the collection’s 24 tracks are ‘Along The Navajo Trail,’ ‘Mary, Mary Lou,’ ‘When I Fall In Love,’ ‘I Cover The Waterfront,’ ‘Today I Sing the Blues,’ ‘God Bless The Child,’ ‘I’ve Gotta Right To Sing The Blues,’ ‘Good Morning, Heartache,’ and ‘T’aint Nobody’s Bizness (If I Do).’

The set’s third volume is an 18-track collection comprised mostly of singles and selections that appeared on hit collections and various artist compilations. These tracks, with the exception of ‘Everybody Loves To Cha Cha Cha’ and ‘With You’ are in mono and also include ‘Only Sixteen,’ and ‘(What a) Wonderful World,’ written by Cooke along with Lou Adler and Herb Alpert who were on staff at Keen. Rarely heard songs include ‘Ee-Yi-Ee-Yi-Oh,’ ‘No One (Can Ever Take Your Place),’ plus, ‘I Thank God,’ ‘Deep River,’ ‘That’s Heaven To Me,’ and ‘Steal Away,’ the four gospel tracks that were released on Keen’s gospel artist compilation LP, I Thank God.

Also released concurrently with the virtual box set are the individual Keen albums with bonus tracks. They include Sam Cooke, the 13-track 1958 label debut, Encore, also from that year with 12 original tracks and the bonus ‘Ee-Yi-Ee-Yi-Oh’ in stereo. 1960’s Hit Kit features fan favorites ‘Everybody Loves to Cha Cha Cha,’ ‘Win Your Love For Me,’ and two versions of ‘ Lonely Island ,’ (the single version of which is included as one of three bonus tracks). Of special note are rare stereo versions of ‘Little Things You Do’ and ‘Let’s Go Steady Again.’ Last but not least is The Wonderful World of Sam Cooke that, of course includes ‘(What A) Wonderful World,’ as well as ‘Summertime (Part I),’ ‘There I’ve Said It Again’ and three bonus tracks.

This is indispensable music from a true master: smooth, elegant and soulful. A Must Have for music fans of every musical persuasion.