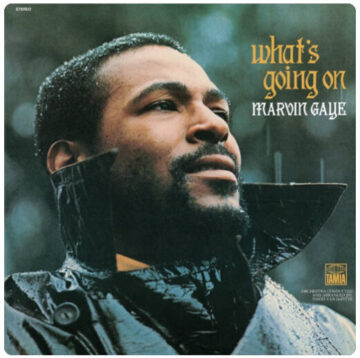 Reprinted from our archives by popular request

Music and politics don’t always mix. An album with overt political messages or references to specific historical events can sound dated outside of the time period that inspired the lyrics’ conception. Even worse, an overly moralizing lyrical tone may alienate listeners. After all, no one wants to feel like they’re being preached to by a pop singer.

This assertion isn’t entirely incompatible with the ideas of Berry Gordy Jr., CEO of Motown Records and Marvin Gaye’s boss and brother-in-law, when he first heard the title track from Gaye’s landmark 1971 recording, What’s Going On. As the founder of Motown and a proponent of pop-influenced soul singles, Gordy was concerned about the crossover appeal of the socially-conscious and deeply introspective song. And after hearing the rest of Gaye’s self-produced album, Gordy found even more reasons to be dismayed. Not only did Gaye’s first album since the death of his long-time duet partner and friend, Tammi Terrell, feature meditations on heavy topics such as war, police brutality, poverty, and drug abuse, it also utilized a song cycle in order to give the album a more cohesive feel. Though this stylistic choice, along with Gaye’s lyrics, gave What’s Going On its status of being the very first soul concept album, the format of having each song lead into the next was certainly unorthodox at the time and made radio play difficult.

But despite Gordy’s best attempts at preventing the release of the record, Gaye was determined to achieve autonomy as an artist. As a testament to his tenacity, Gaye vowed to his brother-in-law that it would be his music, or no music at all. Considering that the factory-like Motown label had made a business in the 60s of manufacturing countless singers and very few musicians, this was certainly a bold move and one that triggered numerous confrontations between Gordy and Gaye. Gordy eventually relented, thinking the single would undoubtedly fail. We, of course, know better. “What’s Going On” became Motown’s fastest selling record, and its parent LP is universally considered to be one of the greatest albums of all time.

Still, the perspective that music and politics can clash isn’t entirely false. There’s always the danger that when you bring politics into the equation, you run the risk of diminishing your fan base. And if you inject your lyrics with too many allusions to specific events, they inevitably sound dated. Political songs that have aged better than others did so by “moving from the particular to the general”. Music critic Andy Gill wrote this about Bob Dylan after the release of “Blowin’ in the Wind”, considered by many to be a timeless protest song. Like “Blowin’ in the Wind” and other political songs that have endured the test of time (“We Shall Overcome” is another example), the success and universal appeal of What’s Going On owe much to the emotionally relatable but factually ambiguous lyrics. By articulating his progressive views and frustrations through the voice of a returning Vietnam War veteran, Gaye produced an album that was timely at its release. But in choosing to avoid specific political details and instead focusing on the deeply personal ways in which the social problems affected him/his alter ego, Gaye was able to craft songs that still apply today.

On “What’s Happening Brother”, the returning war veteran’s disappointment at the economic and social decline of the country he had fought for (Can’t find no work, can’t find no job, my friend/ Money is tighter than it’s ever been) isn’t entirely inconsistent with how many people feel about the current economic recession. The environmental woes of “Mercy Mercy Me (The Ecology)” is perhaps even more timely now than it was in the 1970s. And “What’s Going On”, a truly enduring protest song about a country torn apart by war, poverty, and racial prejudice, has become a pop standard, covered by countless musicians, oftentimes to benefit political causes such as the AIDS epidemic and 9/11. As a song that not only lamented the bigger social issues of the times but also reflected Gaye’s personal troubles, “What’s Going On” remains a classic because it is political without being dogmatic.

What’s Going On‘s audacious message isn’t the only thing that makes it such a significant and influential album in pop music history. Because Gaye had fought for total creative control, which was already a pretty monumental move at the time, he had the freedom to utilize a song-cycle format in order to create a concept album. The first of its kind within soul music, Gaye’s concept album featured a cohesive set of songs that successfully transformed the trademark Motown sound from big, infectious beats to jazzy, languid grooves. Drawing from jazz, funk, classical, and Latin soul, What’s Going On was nothing short of revolutionary at the time of its release. “Right On” is perhaps the best example of the album’s avant-garde leanings. With its Latin-influenced percussive sounds and Gaye’s jazzy piano, the song meanders for nearly eight minutes before transitioning into “Wholly Holy”.

What’s Going On was also a departure from Gaye’s ’60s bombastic singing style, as seen on his duets with Tammy Terrell and songs like “I Heard It Through the Grapevine”. While his four-octave range was still evident, here they sounded light, airy, and contemplative. That Gaye’s resigned pleas on much of the album recall the melancholia of the blues was no coincidence given the nature of the lyrics.

His vocal range is also apparent on the extra material in the 40th Anniversary edition. An early demo version of “Distant Lover”, which would later appear on Let’s Get It On, is especially impressive. The song begins with a preamble from Gaye, stating that the lyrics would be entirely improvised. As Gaye carries the track with his anguished sighs and impassioned wails, the spontaneous raw energy builds to a devastating end as a woman’s voice is heard saying “I don’t love you anymore”. Other alternate versions and bonus tracks included on the deluxe edition are also eye-opening, in particular the instrumental funk experiments of the second disc. But save for a few standout tracks, the outtakes are by and large not essential.

That What’s Going On is so revered perhaps has more to do with its musical impact than just on the strengths of the album alone. Since this was his first time producing an album in its entirety, Gaye’s inexperience on What’s Going On is noticeable when compared to his later LP, Let’s Get It On. Yet it’s the former that most people associate with Marvin Gaye’s legacy. This, of course, has a lot to do with the socially-conscious lyrics. But it isn’t the primary reason. Ultimately what makes What’s Going On unquestionably the most important Motown LP of all time is that as a cohesive concept album, it completely transformed the singles-dominated soul industry (and ironically led to Motown’s decline). It also signaled Gaye’s artistic reinvention, and inspired the careers of other soul musicians, like Stevie Wonder and The Isley Brothers, to take artistic control. Not too shabby for an album that was once considered by Gordy to be “the worst record I ever heard”.