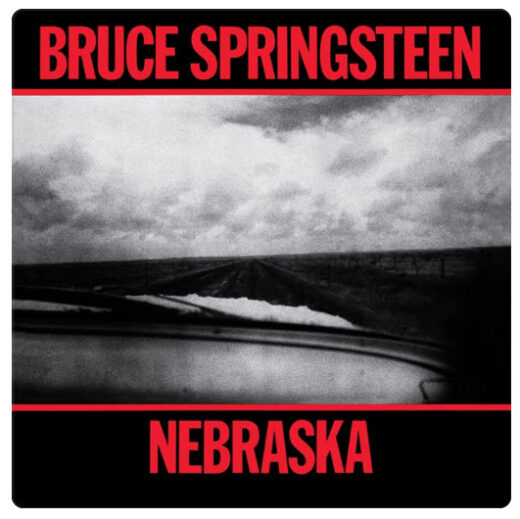 In 1968 Bob Dylan released the album John Wesley Harding; it was a return to his acoustic ballad roots and featured the sparse instrumentation of mythic songs which could have been written anytime in the last 150 years. It contained a strongly religious orientation. The album could not have been a sharper contrast to the mind-bending overwrought psychedelia of the late Sixties. More than 50 years later the JWH album remains one of Dylan‘s finest achievements.

Enter the rocker Bruce Springsteen and his brilliant series of 1970s albums, dominated by stylized retro-rock production, a Phil Spector-like sound, Roy Orbison vocals, and the hard-driving saxophone of Clarence Clemons. The 1975 album Born to Run made many a critic a believer, while the 1978 album Darkness on the Edge of Town is still a standout in the Springsteen catalog. However, in 1981 Springsteen went into the studio alone, leaving the E-Street band behind, and he recorded Nebraska.

This new album was the complete antithesis of everything that had gone before, composed of ten songs that could easily be a part of the Bob Dylan canon: spare, acoustic, mythic, religious, dark. It‘s as though Springsteen had immersed himself in The Times They Are A Changin’ , with its litany of social and economic injustices, while drawing additional inspiration from the black-and-white Arthur Penn film, Bonnie and Clyde. The songs are also highly reminiscent of the darker side of Hank Williams, whose Luke The Drifter body of work is both complex and revelatory.

Everything from the album cover, which is a black and white affair drenched in blood-red, to the lyrics, spells out to me that Springsteen believes that for many the American Dream is a lie. The Nebraska album is a tribute to the downtrodden of America, and it is Springsteen‘s most heart-felt work, and by that standard it is a work that will last for decades to come.

Here‘s what Dylan wrote in 1963 in “North Country Blues”:

Compare this with the tales of the lawless, the unemployed, and the desperate that Bruce writes in Nebraska. Coming from the working class as he did, and understanding the consequences of closed factories, Bruce writes eloquently of lost lives. In “Johnny 99” the poignancy of one man‘s loss of his job and his subsequent shooting of a night clerk in a botched robbery are sung in a high-pitched frenzy of despair. The song stirs both pity and helplessness in the listener when the character tells the judge:

Now judge, I got debts no honest man could pay
The bank was holdin‘ my mortgage and they was takin‘ my house away
Now I ain‘t sayin‘ that makes me an innocent man
But it was more‘n all this that put that gun in my hand

Springsteen‘s vocals are somber, dark, and wild on this record. The title tune is inexorably sad, and is as convincing a ballad as has been written since Dylan‘s early albums. The two standout tracks, however, are “Highway Patrolman”, and “My Father‘s House”.

“Highway Patrolman” has been recorded by Johnny Cash, and most recently performed live in an electrifying performance by Manda Mosher, a very promising singer out of L.A. The song is a tale of brotherly love and shows Bruce at his most tender; it‘s the story of a police officer and his no-good brother Frank. “Nothing”, says the cop, “feels better than blood on blood”; he can‘t turn his back on his brother even when it means conflict with his police duties when Frankie‘s in trouble. It‘s a deeply moving song, filled with nostalgia, regret, and the despair that comes with believing that in the end, we cannot save anyone; love solves nothing.

“My Father‘s House” is the recollection of a dream, and as such, is filled with the inconsistencies of dreamed events. The song works on many levels, both as the record of the estrangement of a father and son, and as a metaphor for man‘s difficult relationship with God. The song is almost hymnal in nature, but it‘s a hymn without the possibility of redemption or reconciliation. The closing lines are among the most beautiful and disturbing that Springsteen has ever written:

With these lyrics Springsteen achieves the pinnacle of songwriting: a lyric of the highest poetic order matched perfectly to a melody that supports the achingly deep awareness of the highest challenge of life: to reconcile the physical with the spiritual, and our passions with our spirit’s need for grace. Who would have suspected this burgeoning maturity from the creator of “Sandy” and “She’s The One”?. There were intimations of the true genius behind his lyrical gift in “Darkness At The Edge Of Town”, but only that: a suggestion that there was something far more to Springsteen than cars, girls and the struggle to get out of town. The whole of Nebraska reveals surprising depths in a working-class rocker, depths which for the most part have been continually overlooked in fans’ adoration of his arena rock.

Here’s the real import of Nebraska for this writer: the album sold poorly and Bruce returned to his band, chastened, I believe, by this unproductive (read un-commercial) foray into his “dark wood”. Did he take the easy way out with his ensuing recordings? Some point to The River or Tunnel of Love or even Devils & Dust and say nay, but I will say this: for a major artist Springsteen has produced a highly variable canon of work. As has Dylan, mind you. Perhaps the only way to have a perfect career is to have a short one: The Beatles, say, or Buddy Holly, or Hank Williams, or any of those brilliant flashes of light and genius who came and went in the space of a few short years. By those artists we’re tormented by what might have been. With Dylan and Springsteen, we’ve seen all sorts of permutations as their lives and interests ebb and flow, and some of it just ain’t pretty. Like our own lives. With our musical heroes though, once they’ve achieved a certain plateau, our expectations of them are boundless.

For me, Born In The U.S.A and much of Springsteen’s output in the past thirty years is the work of a gifted artist who achieved something with Nebraska that perhaps scared him: the thought that his best work might not sell at all. It’s almost as if he said to himself, “well, I’ll squeeze in the occasional masterpiece, no sense gettin’ folks excited with challenging material”.

The album closes with “Reason To Believe” and in this song we are a long way from the innocence of the Tim Hardin song of the same name. Hardin was a romantic who was realistic enough to know that a good deal of romance is based on foolishness and self-deception but he was willing to go along with it. Springsteen, on the other hand, is singing about man‘s deepest urge to believe in something, despite the evidence around the true believer that his faith changes nothing. There‘s nothing romantic about the desperate life. We have Springsteen to thank for delivering the truth with such a high and lonesome and starkly beautiful sound.

Nebraska is haunting and unforgettable, and as essential to your musical education as Bach, The Beatles, Dylan, and Maria Callas. Forty years on the Nebraska album continues to illuminate the darkest corners of American life.