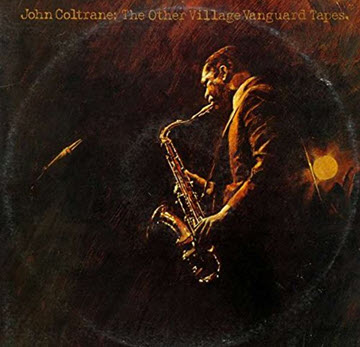 John Coltrane is undoubtedly in the upper echelon of elite jazz musicians, but deciding which album to listen to is complicated because his sound changed every week.  Some groups exhaust a sound or just feel compelled to change direction, while some bands successfully keep the same sound for decades.  The currency of Coltrane’s assessment is practically in days, not years.  Was Coltrane content as a relentless explorer, or was he a tortured soul who constantly yearned for something else? In this case, speculation can be endless, so choosing an essential Coltrane album other than the highly regarded A Love Supreme requires consideration of where it falls along his musical spectrum. The album The Other Village Vanguard Tapes was recorded in late 1961, when the improvising was very free and modal, but the rhythms had a strong pulse. It stands at the fifty-yard line between Coltrane’s early blues and his later “out there” freer stuff.

Live shows can be hit or miss, but there’s a widespread feeling that some cities, and some venues in particular, inspire musicians to their heights. According to the head of Blue Note Records, Bruce Lundvall, attaching the name “Village Vanguard” to an album positively influences sales.  This makes it sound like a superficial consumer behaviour, but it’s reasonable to assume musicians actually perform better in this famous triangular basement, with those killer acoustics and a capacity of only 123.  If people want to know what it sounded like when Coltrane’s group ripped apart a small, smoky, New York club, listen to “the Other Village Vanguard Tapes.”

Not everyone will love or relate to modal jazz, but it’s like a movie so unanimously revered that critics and writers know better than to put it down in public.  The worst you can say is, “it’s not for me.”  It’s a bit erudite, but easily enjoyed by those who just like a mean groove. For Coltrane fans and music buffs, it’s a torrential downpour of swing, and there’s a hot fire under the ass of every musician!  Neglecting this album is irresponsible.

It’s the kind of album with song lengths ranging from 6:18 to 20:32, with most closer to 20.  Why stop cooking once you’ve started?  The songs are all of the same high calibre, so it feels like a book you’ve read and know so well you can start reading from any page and enjoy.

Sometimes free jazz dismantles the beat so it’s effectively killed, its body disposed of in the woods. This isn’t an insult, it’s something done intentionally.  But on this album, the interaction of melody and rhythmic fire creates an irresistible pull, even though Coltrane and company scatter the melody far and wide. It’s free jazz, but far from being without a beat, the legendary Elvin Jones intermittently slaps you in the face with his sticks to make sure you’re awake.  There are other albums from these sessions (and later too from the Village Vanguard in ’67, (very different…), but all ’61 Vanguard are similarly fantastic…especially the chunky box set!