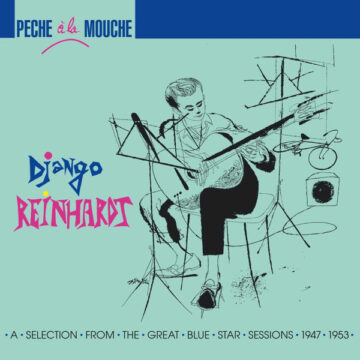 Django Reinhardt’s Pêche à La Mouche is a two-disc album recorded on an electric guitar at the very end of his career, so it sounds nothing like the music that made him famous.  The first disc is from 1947, the second from ’53. By this time Reinhardt had heard Charlie Parker and Dizzy Gillespie.  After absorbing bebop and armed with his amp Django transformed those raw, speedy passages he played all his life into something even more lyrical, more refined, but with the same fire.  Though it’s different, there’s no doubting it’s Django.  He shaved fifteen percent of the notes off his solos, so this album sounds leaner, trimmer, and more concise.

Unlike the earlier albums, the wonderful Stephane Grappelli is absent (though not missed), but there is a drummer, a clarinetist, and a trumpeter.  It’s an understatement to say Django’s early stuff is terrific, but it sounded alike, and so many people have tried to copy it that it’s sadly become almost a cliché.  Any album from the Hot Club is great, but you don’t need six.  This album is uniquely inspired because of when it falls in his career.  By 1953, Reinhardt was no longer in demand.  Django had enormous pride and didn’t take too kindly to a perceived slight in his public stature.  In addition to benefiting from the new style and technologies available, this album was Django’s answer to those who thought he was finished.

When I was taking guitar lessons as a thirteen year old my teacher told me to listen to Muddy Waters and Django. This is the first album I saw and it bowled me over, and just over twenty-four years later it has the same effect (Paul, if you’re reading this, seriously thank you!).  The improvising is so poised, fluid and tasteful.  If every guitarist out there had his incomparable technique, Django’s rhythm and phrasing still set him leagues apart.  No wonder “gypsy jazz” is popular again.

Django spawned imitators in every genre, and his music is impossible to escape for guitar players, but it is amazing how little attention the sound on this album has received.  His ground-breaking swing during the mid-thirties with the Hot Club of France made him a legend, but jazz fans and guitar players owe it to themselves to hear the new direction Django was headed before he died.  On the old acoustic albums, Django played dazzling solos which created an effect that even made the jaws of non-musicians drop.  The solos were amazing for their speed and clarity of the musical ideas, but with an electric guitar Django realised he could play less.  There are tender moments on this album that are downright sad, and times when the melody comes cascading like a waterfall.  Sometimes he only plays two notes and you’re shocked to learn the moment required so little.  But at all times there is unquestioned authority and purpose.